The following methods are generally employed for tunnelling in hard rocks.

There are various methods of tunnelling. The selection of a method depends upon the size of the bore, the condition of the ground, the equipment available, and the extent to which timbering is required. Tunnelling may be basically divided into two main groups.

(a)  Tunnelling in hard rocks

(b) Tunnelling in soft rocks

These are described in detail in the subsequent sections. Tunnelling through water-bearing strata and compressed air tunnelling are discussed subsequently.

The following methods are generally employed for tunnelling in hard rocks.

The full face method is normally selected for small tunnels whose dimensions do not exceed 3 m. In this method, the full face or the entire facade of the tunnel is tackled at the same time. Vertical columns are erected at the face of the tunnel and a large number of drills mounted or fixed on these columns at a suitable height as shown in Fig. 3.2. A series of holes measuring 10 mm to 40 mm in diameter with about 1200 mm centre-to-centre distance are then drilled into the rock, preferably in two rows. These holes are charged with explosives and ignited. Next the muck is removed before repeating the process of drilling holes. 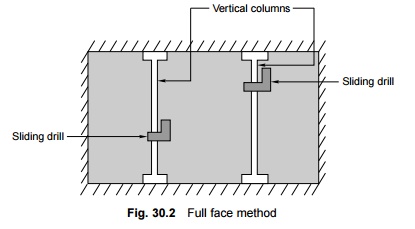 (a)  Since an entire section of the tunnel is tackled at one time, the method is completed expeditiously.

(b) Mucking tracks, which are tracks used for collecting muck, can be laid on the tunnel floor and extended as the work progresses.

(c)  With the development of the 'jumbo' or drill carriage, this method can be used for larger tunnels too.

(b) It is not very suitable for unstable rocks.

(c)  It can normally be adopted for small tunnels only.

In this method, the heading (top or upper half) of the tunnel is bored first and then the bench (bottom or lower half) follows. The heading portion lies about 3.70 m to 4.60 m ahead of the bench portion (Fig. 30.3). In hard rock, the drill holes for the bench are driven at the same time as the removal of the muck. The hard rock permits the roof to stay in place without supports. 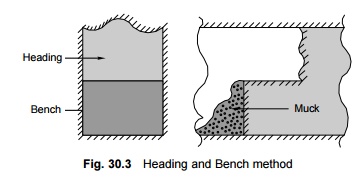 (a)  The work of drilling of holes for the explosives and the removal of muck can progress simultaneously.

(b) This method requires the use of lower quantities of gunpowder than the full face method.

A drift is a small tunnel measuring 3 m × 3 m, which is driven into the rock and whose section is widened in subsequent processes till it equates that of the tunnel. A number of drill holes are provided all around the drift and these are filled up with explosives and ignited so that the size of the drift expands to become equal to the required cross section of the tunnel.

The position of the drift depends upon local conditions; it may be in the centre, top, bottom, or side as shown in Fig. 30.4. Field experience has shown that the central drift is the best choice, as it offers better ventilation and requires lower quantities of explosives. The side drift, however, has the advantage that it permits the use of timber to support the roof.

(a)  If the quality of the rock is bad or if it contains excessive water, this is detected in advance and corrective measures can then be taken in time.

(b) A drift assists in the ventilation of tunnels.

(c)  The quantity of explosives required is less.

(d) A side drift allows the use of timber to support the roof.

(a)  It is a time-consuming process, as the excavation of the main tunnel gets delayed till the drift is completed.

(b) The cost of drilling and removing the muck from the drift is high, as the work has to be done using manually operated power-driven equipment. 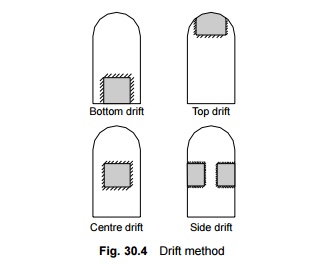 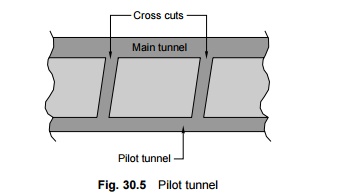 (a)  It helps in removing the muck from the main tunnel quickly.

(b) It helps in providing proper ventilation and lighting in the main tunnel. The method, however, requires the construction of an additional tunnel and therefore the time and cost of construction are higher as compared to the methods described before.

In this method, the excavation is carried out along the perimeter or periphery of the section. The method is also known as the German method.