A block station is a station at which the driver has to obtain an 'authority to proceed' in order to enter the next block section.

A class stations are normally provided on double-line sections. At such stations a 'line clear' signal cannot be granted at the rear of a station unless the line on which a train is to be received is clear and the facing points set and locked. No shunting can be done after line clear has been granted.

A class stations are suitable for sections where traffic passes rapidly. It is essential for the driver of the train to have an advance knowledge of the layout of the block station. The typical layout of an A class station with two-aspect signalling is shown in Fig. 26.1. 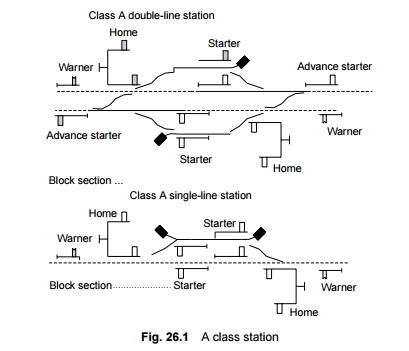 The signals required at an A class station are as follows.

Warner A warner signal is placed at a warning distance from the home signal, the main function of which is to indicate whether the section beyond is clear or otherwise.

Home  A home signal, which is the first stop signal.

Starter A starter signal is placed at an adequate distance from the home signal and marks the point up to which the line should be clear so that the train can be given permission to approach.

Advance starter This signal is optional and is provided to allow the drivers to further increase the speed of the trains.

(a)  More economical vis-ŕ-vis B class stations because of the use of fewer signals.

(b) Ensures the safety of the train because of the provision a warner signal ahead of a home signal.

(a)  No shunting is possible once line clear has been granted.

(b) Another clear disadvantage of A class stations, is that a line at the station has to be kept clear up to the starter signal once the line clear signal has been given, and as such the flexibility of working and shunting is restricted.

This is the most common type of station and is provided on single-line as well as double-line sections. At a B class station (Fig. 26.2), the line has to be clear up to an adequate distance beyond the outer signal before 'permission to approach' can be given to a train. The minimum signals required at a B class station are as follows. 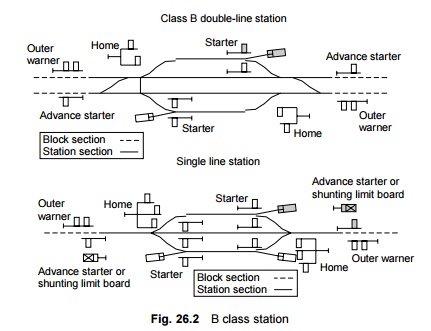 Outer An outer signal, which is the first stop signal. The outer signal can also be below the warner also.

Home A home signal, which protects the facing point and is placed at an adequate distance from the outer signal.

Starter  A starter signal is also provided on a double-line section.

The B class station is the most common station in use on Indian Railways because it offers greater flexibility of working. By providing a warner on the outer arm post, this station can also cater to fast traffic while permitting shunting of vehicles even when a clear signal has been given.

The C class station (Fig. 26.3) is only a block hut where no booking of passengers is done. It is basically provided to split a long block section so that the interval between successive trains is reduced. No train normally stops at these stations. The minimum signals required are as follows. 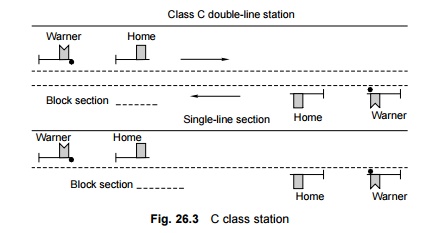 Warner A warner signal placed at an adequate warning distance from the home signal to indicate whether the section ahead is clear or not.

Home  A home signal, which is the first stop signal.

The advantage of a C class station is that it ensures the faster movement of trains and increases line capacity. The disadvantage, however, is that no shunting is possible and trains cannot stop at these stations.