Home | | Railways and Airports and Harbour Engineering | Functional Classification of Railway Stations
Posted On :  08.08.2016 10:48 am

The layout of stations varies in size and importance according to the type and volume of traffic handled and according to their locations with respect to cities or industrial areas.

The layout of stations varies in size and importance according to the type and volume of traffic handled and according to their locations with respect to cities or industrial areas. Broadly speaking, the layouts required for passenger stations and their yards can be divided into the following categories for the purpose of study.

A halt (Fig. 26.4) is the simplest station where trains can stop on a railway line. A halt usually has only a rail level platform with a name board at either end. Sometimes a small waiting shed is also provided, which also serves as a booking office. There is no yard or station building or staff provided for such types of stations. Some selected trains are allotted a stoppage line of a minute or two at such stations to enable passengers to entrain or detrain. The booking of passengers is done by travelling ticket examiners or booking clerks. A notable example of the halt is a Gurhmukteshwar bridge halt, which is situated on the bank or river Ganga.

Crossing stations may be further classified as (a) Roadside small- and medium-sized stations and (b) Major stations. Some of the important tasks dealt with these stations are the following.

Operating work The main operations performed at these stations include attending to the passing and crossing of trains, giving precedence to important trains, and other miscellaneous works done for stopping passenger trains. Slow passenger trains mostly stop at small stations whereas mail and express trains stop at major stations.

Goods traffic These stations mostly deal with parcel traffic only. Piecemeal wagon load goods traffic is now being accepted on roadside stations as per the new policy of the Railway Ministry with effect from December 1994.

Station master's duty for run-through trains When a train runs through the station, the station master should stand opposite his office in proper uniform and exchange 'all right' signals with the driver and guard of the train. He should watch the running train carefully and if there are any unusual occurrences such as the incidence of a hot box, he should instruct the station officials in advance to stop and examine the train.

The following are some of the important features of this track layout.

(a)  It is a three-line station and provides facilities for the simultaneous reception of trains from both sides because of the proximity of sand humps in each direction.

(b) There are two platforms, namely, an island platform and a platform near the station building. The island platform can deal with two stopping trains simultaneously. Also, if a goods train has to be stopped at an island station, it can be accommodated on the loop line of the platform, thus keeping the main line free for run-through traffic. Important trains can be made to halt on the platform near the station building.

(c)  There is a dead end siding at either end of the station to accommodate wagons that are marked sick.

(d) The foot over bridge (FOB) helps the passengers to reach the island platform from the station building and vice versa.

Double-line crossing station with an extra loop In the case of a double-line section, which consists of separate up and down lines to deal with traffic moving in either direction, the layout of a station yard is somewhat different.

Figure 26.7 shows a double-line station with three lines receiving, with one common loop for trains coming from both sides. Some of the important features of this layout are as follows. 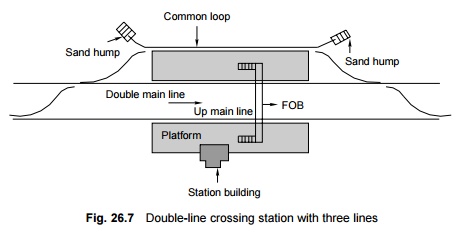 (a)  This is a wayside station for a double-line section with almost minimum facilities.

(b) In addition to two main lines an up line and a down line, there is a common loop that can receive trains from either direction. There is a total of three lines only.

(c)  It consists of two platforms, one an island platform and the other a platform beside the station building.

(d) There is a foot over bridge to connect the station building to the island platform and back.

(e)  There are emergency crossovers provided on either side of the station so that it can be converted into a single-line station in the case of an emergency.

Double-line crossing station with four lines The more common layout of a station yard on a double-line section has four lines station as shown in Fig. 26.8. The important features of this layout are as follows. 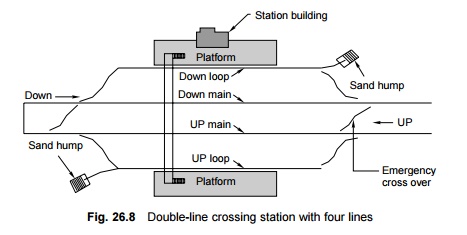 (a)  This is a four-line station, where, apart from two up and down main lines, there are two extra loops. These loops are directional loops, i.e., one is known as a down loop as it is meant for down trains while the other is an up loop and is meant for up trains.

(b) There are two platforms provided with connection loops. One of these platforms can also be an island platform.

(c)  There is provision of a foot over bridge to connect the two platforms.

(d) Two emergency crossovers are provided on either side of the station so that is can be converted into a single-line station in the case of an emergency.

A junction station is the meeting point of three or more lines emerging from different directions. Normally at junctions, trains arrive on branch lines and return to the same station from where they started or proceed to other stations from where they again return to their originating stations.

(b) A foot over bridge is provided for passengers to move between the station platform and the island platform.

(c)  It is provided with a small goods siding and a goods platform to deal with goods traffic.

(d) A turntable is provided for reversing the direction of an engine, if required.

(e)  The emergency crossover on provided either side of the station helps in switching to a single-line set-up in the case of an emergency.

A few examples of junction stations are the Ghaziabad, Allahabad, Itarsi, Nagpur, and Jabalpur junctions. The typical layout of a junction station on a double-line section with one or two branch lines coming in from one or two different directions is shown in Fig. 26.10. The most important feature of this layout is that such a station receives traffic from four different directions, i.e., up main line, down main 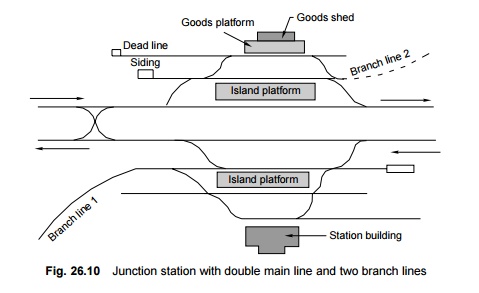 line, branch line 1, and branch line 2. Most of the facilities provided at this station are almost the same as described for the layout shown in Fig. 26.9.

The station at which a railway line or one of its branches terminates is known as a terminal station or a terminal junction (Fig. 26.11). The reception line terminates in a dead end and there is provision for the engine of an incoming train to turn around and move from the front to the rear of the train at such a station. In addition, a terminal station may need to be equipped with facilities for watering, cleaning, coaling, fuelling, and stabling the engines; storing, inspecting, washing and charging the carriages; and such other works. 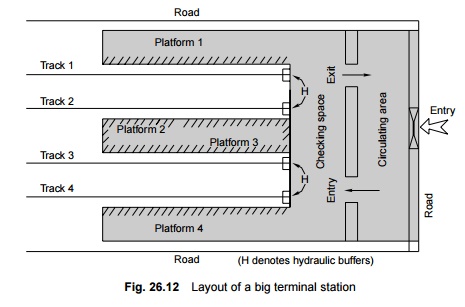 It may be noticed that access from one platform to another is via a concourse and that there are no overbridges provided for this purpose.

Grand Central Station at New York Figure 26.13 depicts the circular loop provided at the Grand Central Station, New York. The provision of circular loops enables the trains to pass through a terminal station without any delay. A further advantage attached to the loop system is that it enables the provision of special stations for dealing with suburban traffic at underground locations away from the congested area of the main terminal and in close proximity to business districts, thus affording direct connections with other stations.