The basic underlying principle of radioimmunoassay utilizes the reaction between an antigen (hapten) and its specific antibody. Small molecules (micromolecular) for instance : drugs that may serve as haptens and can normally be made antigenic by coupling them chemically to a macromolecular substance, such as : protein polysaccharide, carbohydrate etc. The hapten is obtained from a non-antigenic compound (micromolecule) e.g., morphine, cartelol etc., which is ultimately conjugated*** convalently to a carrier**** macromolecule to render it antigenic.

Animals normally develop antibodies***** to the injected immunogenic substance as part of their natural immune response. The serum derived from these animals is used as the antibody source and tested with reference to their specificity, sensitivity or affinity at their titer level. By specificity, is meant the lowest concentration of a compound which can be detected in undiluted body fluid. Generally, it is referred to as the ‘‘detection limit’’ or the ‘‘cut off level’’.

Sensitivity defines the degree to which an assay can distinguish one compound from another of the same nature and an immunoassay is a function of the particular antibody molecules contained in the antiserum. Specificity of the antiserum is a function of the particular antigen used to immunize the animal. Affinity usually measures how strongly bound is the antigen to the antibody. Titer refers to the concentration level of, in the context of the usage, antibody contained in the obtained serum.

Immunological reactions by virtue of their specificity allow the discrete identification of single molecular entities in the presence of many-fold higher concentrations of either multiple or chemically identical molecular entities. However, it is pertinent to be noted here that both immunological and immunochemical techniques are capable of providing the much sought after assay systems for pharmaceutical substances present in complex mixtures without the necessity of undergoing through the tedious and cumbersome process of prior extraction and purification required frequently for their respective biological and chemical tests. Interestingly, the radioimmunochemical methods possess the additional advantages of offering exquisite sensitivity as well as enhanced specificity*.

1. HAPTEN DETERMINANTS AND PURITY : THE KEY TO IMMUNOLOGICAL SPECIFICITY

It has since been recognized as a well established phenomenon that is possible to hook-up a micromolecule (drug) to a macromolecule (protein, polypeptide, polysaccharide) to render it antigenic, inject the resulting conjugate into an immunologically competent animal and subsequently harvest antibodies which includes those bound to the hapten moiety. Nevertheless, the animal should be genetically a responder with regard to the specific macromolecule carrier and even so to the micromolecule moiety of the immunogenic conjugate. Apparently, it may appear as the most efficient and easiest means to hook-up the micromolecule being made haptenic by any of its available chemically reactive functional groups to the selected carrier molecule.

But unfortunately, no matter how many competent animals are immunized with such an immunogenic conjugate, the antisera thus generated cannot contain a population in the total antibody immunoglobulin (IgG) pool that will recognize the chemically reactive group used for coupling to the carrier portion of the conjugate moiety. In case, only a small quantum of antigenic determinants** exist in the hapten before conju-gation to macromolecule the loss of even one functional group can turn out to be critical.

(i) The functional groups of the hapten should remain unblocked in the conjugate molecule,

(ii) These chemical functions are primarily responsible for metabolic activity ; besides, all active functions of a small hapten should remain accessible in the hapten carrier conjugate to obtain the most exquisitely specific antibody immunoglobulin (IgG) population of which the immune system is capable,

(iii) The fewer the active functions are available to serve as haptenic determination, the lesser will be the specificity of the reaction in radioimmunoassay ; in other words, the greater the number of antigenic determinants in a hapten molecule the more specific shall be its reaction with its antibody.

Example : Blockade of a single hydroxyl group of morphine in the preparation of morphine immunogen results in an antiserum that is entirely unable to distinguish homologous morphine forms from its corresponding surrogates with unavailable hydroxyl(s)***. Further, the antiserum produced by immunization with such a morphonyl immunogen reacts with codeine either equally or better than morphine.

(iv) All chemically reactive functions of a pure derivative, not particularly those which coincide with physiological activity, must remain undistorted and accessible to avail themselves as immunological determinants.

The principle governing radioimmunoassay has been duly illustrated in Figure 32.1. 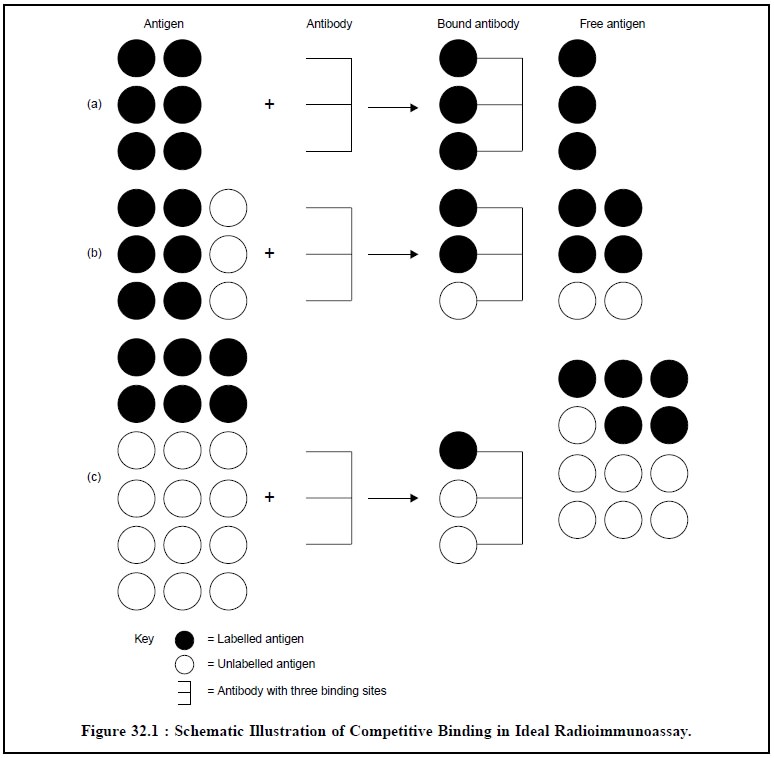 An ideal behaviour has been assumed in Figure 32.1, whereby most radioimmunoassay very closely approach this condition. In order to fulfill the requirements of an ideal behaviour the following criteria must be accomplished, namely :

(ii) The two reactions ultimately go to completion i.e., the equilibrium constants of the binding of labelled and unlabelled antigen to antibody are not only equal but also are so huge in number that they may be regarded as infinite,

(iii) The antigen and antibody usually react in the ratio 1 : 1, and

(iv) There are no cross reactions observed in the medium i.e., the antibody being specific only for the single antigen indicated in the reaction or being determined.

and a limited amount of its specific binding antibody (P), then assuming a dynamic equilibrium exists between (A) and (P), (A*) shall distribute itself evenly among the unlabelled substrate (A). If the binding affinity between (A) and (P) is very high, virtually all the (A*) added will be found until (P) is saturated and at equilibrium. Thus, we have :

At this juncture, if further (A) is added, it will also compete for the same binding site so that (A* – P) shall be reduced. Still further additions of (A) will cause the (A* – P) concentration to be reduced further.

Under these prevailing circumstances the reduction in (A* – P) complex concentration taking place may be predicted as follows :

Assuming that P (antibody) has 200 binding sites available and at the initial stage only 20 molecules of (A) is present, sufficient (A*) is added so as to saturate P i.e., 180 molecules of (A*). Therefore, virtually all are bound so that :

If, then 100 molecules of A are added, there is a total of 300 molecules of (A* + A) competing for 200 binding sites on the antibody (P). Now, when an equilibrium is established, the percentage bound is given by the expression, :

If a further 100 molecules of A are added at this stage, the percentage bound shall become :

Thus, continuing with further additions of (A), each of 100 molecules at a time will ultimately give rise to two typical RIA-Standard Curves as depicted in Figure 32.2 and Figure 32.3 respectively.

Form Figure 32.2, it is quite evident that the percentage of radioactive compound bound A* decreases with the continual addition of unlabelled compound A. 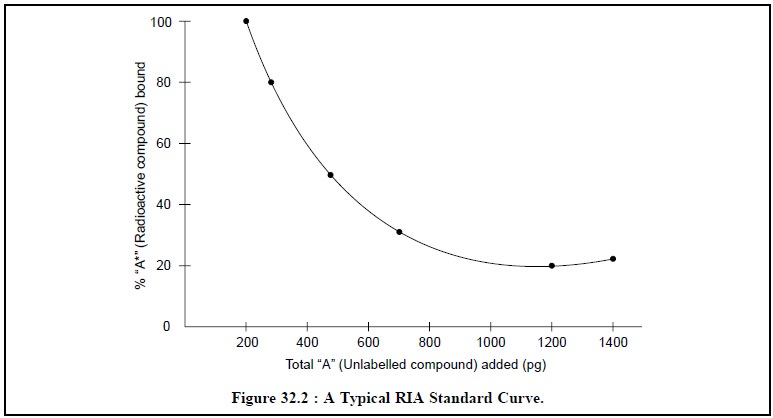 Figure 32.3, depicts the plotting of the percentage inhibition of labelled compound binding A* against the continual addition of unlabelled compound A thereby giving rise to a straight line. 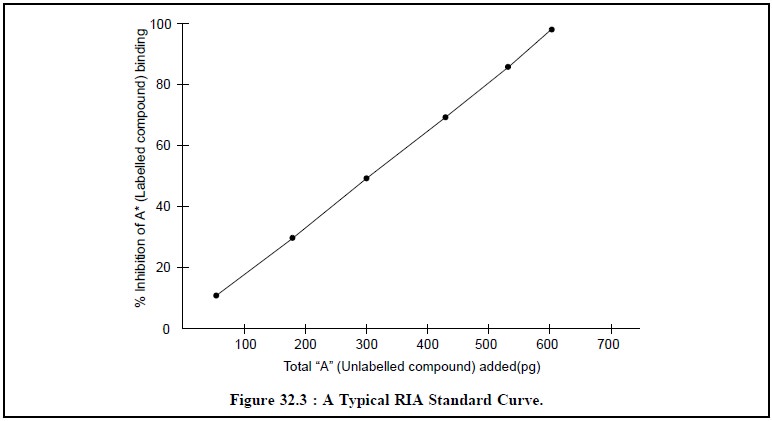 The following important points may be observed :

(a) In place of pure unlabelled A, a sample of plasma from which all the antibody P has been removed duly, and which contains an unknown amount of A, is added to the same system, it may be quantitated as per the respective observed fall in A* – P complex concentration that it causes ultimately,

(b) It is pertinent to mention here that the validity of radioimmunoassay procedure solely depends upon the identical behaviour of standards as well as unknowns (i.e., unlabelled antigenic substance in unknown sample being assayed). However, this particular condition may be tested and verified by making multiple dilutions of an unknown sample and subsequently determining whether the curve of competitive inhibition of binding is superimposable on the standard curve employed for the respective assay. Failure to fulfill this condition precludes a truly quantitative estimation+, and

(c) A crude hormone preparation is found to be satisfactory enough both for immunization and for use as a standard, but for the purpose of comparison of values collected from various laboratories, a generally available reference preparation must be used as a standard solution.