2. The manmade canal through an isthmus between Egypt and Sinai Peninsula is

3. In respect of the Mediterranean climate, consider the following statements and choose the correct answer.

1. The average rainfall is 15cm

2. The summers are hot and dry; winters are rainy.

3. Winters are cool and dry; Summers are hot and wet

d. All are correct

4. The range which separates the west and east flowing rivers in Australia is

5. Kalgoorile is famous for mining.

2. Mt. Kilimanjaro is the highest peak of Africa.

3. Eucalyptus is the most common tree in Australia.

4. A temperate grass land of Australia is called Downs.

5. Dakshin Gangotri is the first Indian research station in Antarctica.

5. Jewel of the earth — Equatorial forest

1. Assertion (A): Aurora is a curtain of colour lights appear in the sky.

Reason (R): They are caused by magnetic storms in the upper atmosphere.

a. Both A and R are individually true and R is the correct explanation for A.

b. Both A and R are individually true but R is not the correct explanation for A

d. R is true but A is false

2. Assertion (A): A geological feature of Africa is the Great Rift Valley.

Reason (R): A Rift valley is a large crack in the earth’s surface formed by tectonic activity.

a. Both A and R is individually true and R is the correct explanation for A.

b. Both A and R are individually true but R is not the correct explanation for A

1. Why Africa is called a “Mother Continent”?

Answer: Africa is nicknamed as the ‘Mother Continent’ as it was the oldest inhabited continent on Earth.

2. What are the important rivers of Africa?

3. Name the physical division of Australia.

Answer: The Physical divisions of Australia are

(i) The Great Western Plateau

4. Write about the nature of Antarctic continent.

(i) Antarctica is a unique continent. It does not have a native population.

(ii) There is no country in Antarctica.

(iii) It is the coldest continent with a permanent cover of ice.

(iv) It is the only continent called white continent.

a) Sahel is a semi-arid tropical Savanna region.

c) It is largely a semi-arid belt of barren, sandy and rocky land.

a) The world-famous Sahara desert is located in the northern part of Africa.

c) It consists of many topographical features such as Mountain, plateaus, ergs, oases, sand and gravel covered plains, salt flats, basins and depressions.’

a) The West Antarctica faces the Pacific Ocean.

b) The Antarctic Peninsula which points towards the South America shows that it is the continuation of the Andes mountain range.

a) The East Antarctica faces the Atlantic and the Indian Oceans.

b) The Mt. Erebus in this region is an active volcano located in the Ross Island.

a) Great Barrier Reef is located in the north east of Australia.

b) It is formed by the tiny coral polyps..

a) The Artesian Basins are regions on the earth’s surface where water gushes out like a fountain.

b) It is found in the arid and semi - arid parts of Queensland.

1. Egypt is called the gift of the Nile.

(i) Nile is the life line of Egypt

(ii) Without Nile the Egypt would have been a desert

(iii) So Egypt in the gift of the Nile.

2. Deserts are found in the western margins of continents.

(i) Most of the world deserts are located in the western margins of continents in the subtropics because the prevailing winds in the tropics are tropical easterly winds.

(ii) The tropical easterly winds become dry by the time they reach the western margins of continent and so they bring no rainfall.

3. Antarctica is called the continent of scientists

(i) Scientists of any country are free to conduct experiments and collect data from Antarctica.

(ii) Hence it is called ‘continent of Science’.

VIII Answer in a paragraph

(i) Minerals are the largest export item of Australia.

(ii) It contributes about 10 percent of country’s GDP.

(iii) Australia is the world’s leading producer of bauxite, limonite, rutile and zircon.

(vii) Petroleum and natural gas is obtained from Bass Strait and west of Brisbane.

(viii) Uranium is mined in northern territory at Ram jungle and Queensland.

(ix) Gold is mined in the western desert at Kalgoorlie and Koolgarlie.

2. Describe the flora and fauna of Antarctica

(i) Since the temperature is below freezing point almost throughout the year, no major vegetation is found in this continent.

(iii) Some algae live in the snow, while other plants grow on the coastal rocky land that is ice free.

(iv) A few species of plants, such as plankton, algae and mosses are seen in and around Antarctica’s fresh and saltwater lakes.

(v) Small red fish called krill are found in large shoals. It is the food for many warm blooded sea animals.

(vi) The blue whale is the largest animal which feeds on plankton. All these animals and birds have a thick layer of fat called blubber which helps them to withstand the cold condition.

(vii) Penguin birds in Antarctica cannot fly. They have webbed feet and flipper instead of wings. Small invertebrates are the only land animals which lives in the continent.

3. Name the physical divisions of Africa and explain any one.

(1) Africa consists of mixture ofland forms such as mountains, plateaus and plains. The following are the 8 major physical divisions of Africa.

(d) The Great Rift Valley and the Great Lakes of Africa

(i) Most part of the Southern Africa is a plateau region.

(ii) Drakensberg Mountain is found in the eastern portion of the escarpment.

(v) This region is covered with grasslands known as‘Veld’.

(vi) Kalahari Desert lies in the south and Namib Desert is along the south -west shore of Africa.

(vii) Kalahari Desert in this region is not actually a desert but, a bushy scrubland situated between the Orange and Zambezi Rivers.

Mark the following on the outline map of Africa and Australia 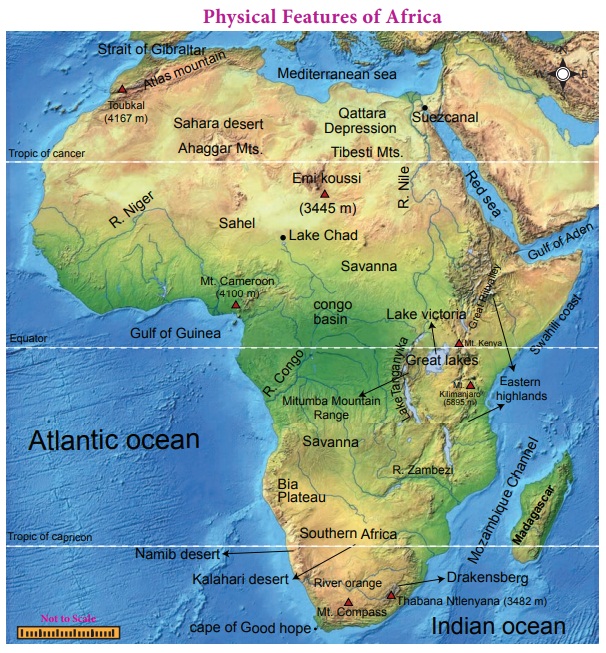 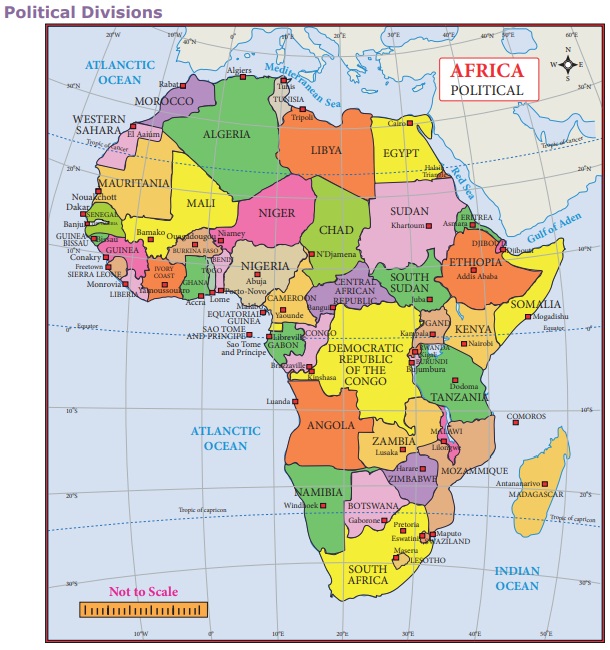 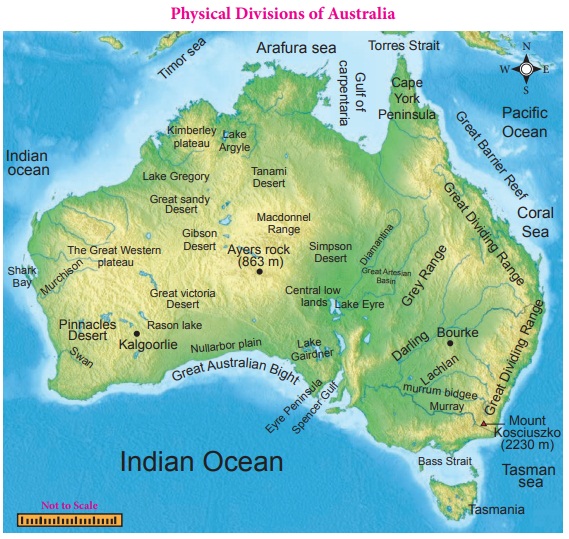 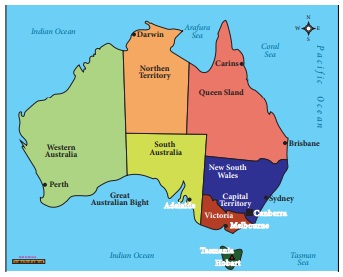 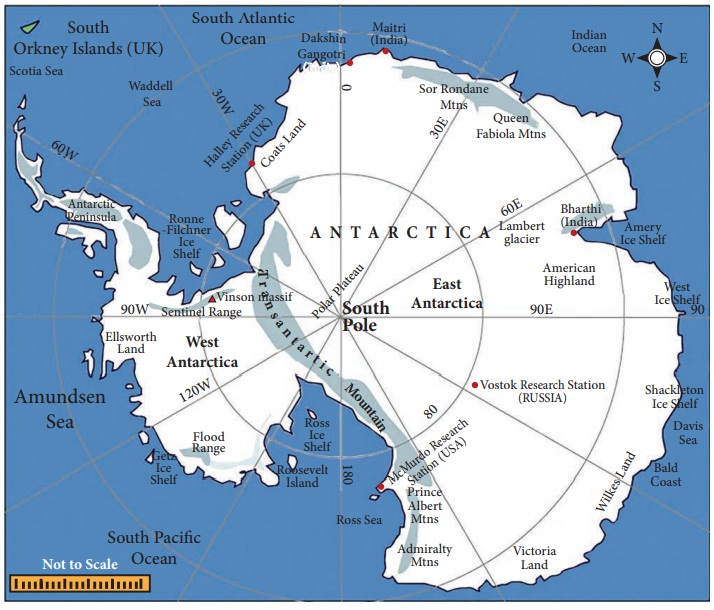 1. Find out the hemisphere and season during December for the following countries 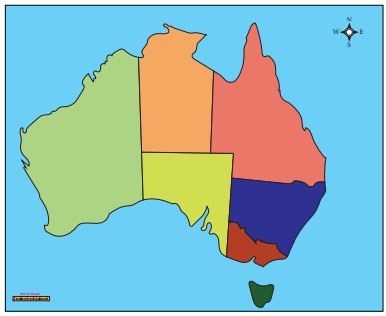 2. Label the different states of Australia in the following map. 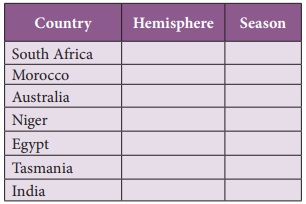