I. Choose the correct option

1. Light travels only in a . It is  because of this property that are formed

2. Light that hits a mirror gets

5. You can see your image in polished floors, but not in wooden table because

6. Choose the translucent substance from the following

7. Reflection occurs , when the light

a. about to reach a surface

b. approaches a surface

c. passes through a surface

[Answer: (b) approaches a surface]

8. Which of the following is the best reflector of light?

9. Sivarajan placed a meter stick in the playground at 7.00 am in the morning. How will the shadow of the stick at noon look in comparison to the one in the morning

a. There will be no shadow

b. The shadow will be longer and on the opposite side as the sun

c. The shadow will be shorter and on the same side as the sun

d. The shadow will be shorter

[Answer: (d) The shadow will be shorter]

10. The image formed by a pinhole camera is in-verted because,

a. light travels in straight lines

b. light rays become laterally inverted as they pass through a pinhole camera

11. Which of the following facts explain how shadows are formed?

a. Light travels in straight lines

b. Opaque bodies do not allow light to pass through them

c. Reflection occurs at a smooth surfaces like mirrors

1. A plane mirror produces a virtual and erect image

2. A regular reflection helps us to see the objects

3. The light ray gets reflected when it falls on any polished surface.

4. Sunlight is a blend of seven colors

5. The splitting of white light in to seven colors is called dispersion.

7. The sunlight can be split into its constituent colors using prism.

8. Reflection of light from rough surface is called irregular reflection

1. The image of right hand in a plane mirror looks like a left hand Answer: True

2. Rainbow is formed by dispersion of which light by water drops Answer: True

3. The image formed by the plane mirror is laterally inverted, hence the image seen through the periscope is also laterally in-verted Answer: False.

Correct statement: The image formed by the plane mirror is laterally inverted, hence the image seen through the periscope is erect. This is because in periscope, image is reflected by two mirrors.

4. We see planets because they reflect light from the sun Answer: True

5. We see a book because it reflects the light that falls on its surface Answer: True

6. The image formed in a pinhole camera is always inverted Answer: True

7. The image formed in a pinhole camera is always the same size as the object Answer: False.

8. The image formed in a plane mirror is upside down Answer: False.

Correct statement: The image formed in a plane mirror is erect.

10. A shadow is formed on the same side of the object as the source of light. Answer: False.

Correct statement : A shadow is formed on the opposite side of the object as the source of light.

11. we are able to see things around us with the help of regular reflection Answer: True

12. After passing through a prism, white light splits into a band of seven colours Answer: True

1. With the help of a diagram, state the laws of reflection 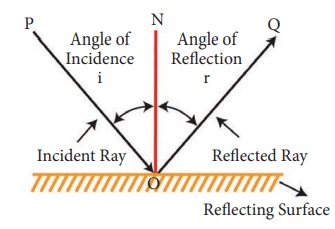 (ii) The incident ray, the reflected ray and the normal at the point of incidence lie on the same plane.

2. Figure shows a pencil placed above a mirror 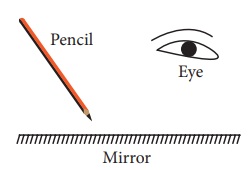 a. Draw its image formed by the mirror

b. Show how light rays from the object are reflected at the mirror to form the image for the eye. 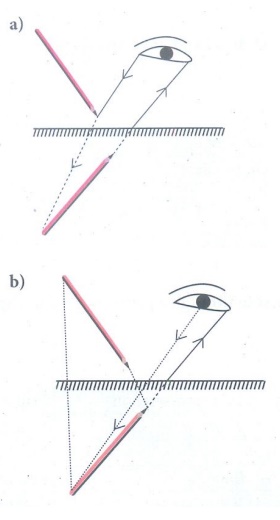 3. A person is looking at the image of a tree in a mirror placed 3.5 m in front of him. Given that the tree is at 0.5 m behind his eyes. Find the distance between the image of the tree and his eyes. What are needed to see an object?

Distance between the person and the mirror = 3.5 m

Distance between the person and tree (object) = 0.5 m.

Things needed to see an object :

4. What are luminous objects?

5. Is the moon a luminous object?

Answer: No, the moon is non-luminous. The reason is that moon does not produce its own light. Instead, it reflects the light of the sun falling on it.

6. What are the three types of materials based on the absorption of light?

7. What are the parts of shadow?

8. What are the properties of shadow?

(ii) Shadows will be formed in the opposite side of light source.

(iii) It cannot be determined the characteristics of an object by its shadow.

(iv) The shadow will be always darker, whatever may be the color of light rays.

(v) Light source, opaque object are shadow all are in a straight line.

9. What is plane mirror?

Answer: A prism is an object made up of a transparent material, like glass or plastic that has at least two flat surfaces that form an acute angle (less than 90°).

11. What do you mean by visible light?

Answer: Visible light is a spectrum of a number of waves with different wavelength range from 400nm to 700nm (1 nm.= 10-9 meter) each wave has a definite wavelength represents a particular colour. 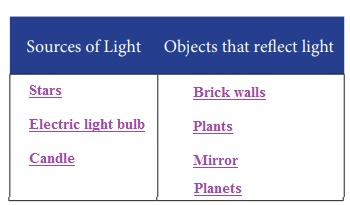 13. A boy of height 1m 45 cm is standing in front of a long mirror at a distance of 2 m. From this information, fill up the following sentences:

a. The distance between the boy and his image is 4m.

b The height of the image is same.

c. When the boy moves 1m forward, the distance between her and her image is 2m.

14. Draw a diagram of a pin hole camera showing the rays of light passing between the Object and its image 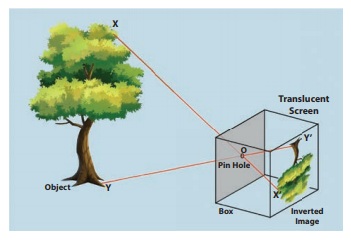 15. Why is the writing on the front of an ambulance back to front as shown in the picture? 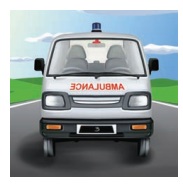 (i) This is due to lateral inversion.

(ii) The phenomenon due to which the left side of an object appears to be right side of the object in its image in a reflecting medium (mirror).

(iii) So that drivers see the word the right way around in their rear-view mirror.

16. Explain with examples, why some capital letters look the same in a mirror but others are reversed.

Answer: Any letter that has a bilateral symmetry will have its mirror image the same as that of the object.

17. Two plane mirrors M1 and M2 are placed perpendicular with each other, as shown in figure. The ray AB makes an angle 39 ° with the plane mirror M1, then 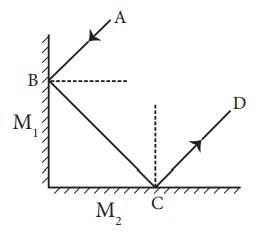 3. What is the angle of incident corresponding to the ray BC?

4. What is the angle of reflection corresponding to the ray CD 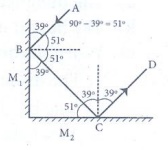 18. Rajan was playing with the mirror images of a clock. He looked at the clock in his room. It was showing 1:40. Draw the position of the hands on the real clock and on its mirror reflection. Write below the picture what time each picture is showing. 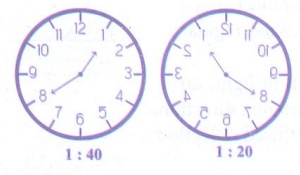 19. What is reflection of light?

Answer: The bouncing back of light from a reflecting surface of an object is called as reflection of light.

20. If a ray of light is falling on a plane mirror at an angle of 500 is formed, what will be the angle of reflection? 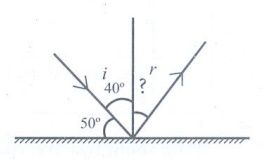 According to laws of reflection,

Angle of incidence = Angle of reflection

21. What do you mean by lateral inversion?

Answer: The phenomenon due to which left hand side of object appears as right hand side and vice versa is called lateral inversion.

22. How do you obtain a spectrum of light?

Answer: When white light is made to fall on the surface of a prism, it disperses and we obtain a spectrum of light.

23. Why do we see white color in Newton’s disc, when we rotate it very fast?

Answer: When the disc turned quickly, the retina receives the sensation of the spectrum simultaneously and disc appears white.

24. What is a shadow? What things are necessary for the formation of a shadow?

(i) Shadows are formed because light travels in straight lines.

(ii) Shadow is always against, opposite side of light source.

(iii) Shadow is formed by opaque objects that stop high from propagating.

(iv) Things necessary for the formation of shadow: source of light, opaque object.

1. What are regular and irregular reflection? Explain with the help of diagrams 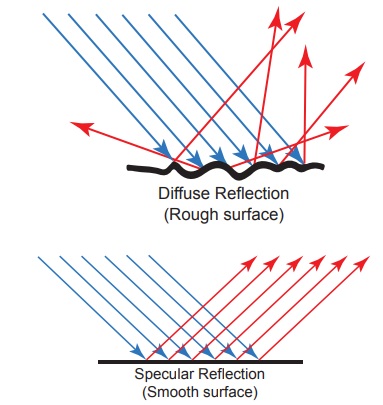 (ii) Irregular reflection : When a parallel beam of light, on striking some rough surface, is reflected in different directions, then such a reflection is called irregular or diffused reflection.

2. What are the difference between luminous and non-luminous objects? Give two examples of each.

1. All objects which emit light energy by themselves are called luminous objects.

1. All objects which do not emit light energy of their own, but reflect the light energy falling on them and hence, become visible are called non- luminous object.

3. Write about two everyday situations that tell you that light travels in a straight line.

(i) Formation of shadow: Shadows are formed when some light rays continue its travel in straight lines while other rays are stopped by an object.

(ii) When there is a small hole in a room, light travels only in a straight line.

4. Differentiate between a reflection and a shadow

1. When light falls on a surface, the direction of ray is changed. This change in direction is known as reflection of light.

2. Eg.: You see your reflection in a pool of water or mirror.

1. Shadow is an image formed by obstruction of light.

2. Eg. : If you place your hand in front of a candle, you will see the image of the hand on the wall. This image will show only the outline of the object placed in front of the light source.

5. What are the characteristics of an image formed in a plane mirror?

(i) Image formed in a plane mirror is upright.

(ii) Image formed in a plane mirror is virtual

(iii) The image is of the same size as the object 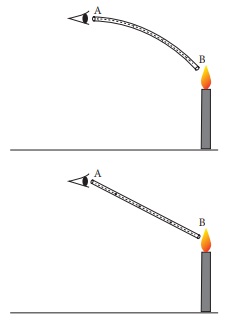 (i) When the tube is bent, we cannot see the source of light.

(ii) When the tube is held straight we can see the flame. The two pictures verify that light travels in straight lines. This is known as rectilinear propagation of light.

(a) Incident ray: The ray of light that falls on the surface of the reflection materials.

(b) Reflected ray: The ray of light that comes from the point when the incident ray falls on the reflection material.

(c) Normal: The perpendicular line drawn from the point of incidence to the plane of reflecting surface is called normal.

8. Compare the images formed by plane mirror with that by pinhole camera

Difference between the images formed in Pinhole camera and Plane mirror :

2. The image may not be equal to the size of the object

3. The image is inverted

1. The image is virtual

2. The image is equal to the size of the object

3. The image is erect