Don Quixote liked to read books about knights. These books were full of incredible adventures of courageous knights.

2. What effect do the things Don Quixote reads have on him?

Don Quixote became absorbed in those stories. He hardly remembered to eat or sleep.

3. Why didn’t Don Quixote believe Sancho Panza when Sancho told him the ogres were actually windmills?

Don Quixote thought that Sancho Panza was afraid of ogres. So he did not believe Sancho Panza when he told him that the ogres were actually windmills.

4. Why do you think Sancho continued to journey on with Don Quixote after the windmill incident?

Sancho Panza was loyal to Don Quixote. He wanted to protect his master from harm. Moreover, Don promised to give him an island. So Sancho Panza gave him timely warning and continued to travel with him.

5. When Don Quixote sees the cloud of dust on the plain in the distance, what does he think causes it?

Don Quixote thought that a prodigious army was marching in their direction. He thought that the cloud of dust was raised by the army.

6. Sancho sees two clouds of dust, leading him to conclude that there are two armies. What does Don Quixote think will happen next?

Don Quixote thinks that the two armies would close in on him.

7. What is the reaction of the shepherds when they see that Don Quixote is attacking their sheep?

The shepherds pelted stones on Don Quixote. Don was wounded and he fell to the ground.

1. Most people associate windmills with Holland, rather than Spain. Use the encyclopaedia and any other sources you might have to find out more about windmills and their traditional and modern uses. Then, make a model of a windmill to display with the results of your research.

2. Draw a design of a boat that skims trash off the surface of a river, lake, or ocean. Label the parts and give your invention a catchy name.

* What kind of vessel could do the job?

* What parts would it have?

* How would it move?

* How could it tell the difference between trash and other objects, such as animals and seaweed?

* How would it store and dump the trash?

* Could your machine double as a beach sweeper, sifting trash from sand?

To Dream the Impossible Dream

Don Quixote might be seen as not simply crazy in his refusal to see things as they really are but more like a person who wants to accomplish a greater good and so refuses to compromise his ideals. Examples of such people include Nelson Mandela, Mahatma Gandhi, and Martin Luther King Jr.

Discuss (with examples and other evidence) whether or not they think Quixote deserves to be put in the company of real-world idealists or is merely delusional. 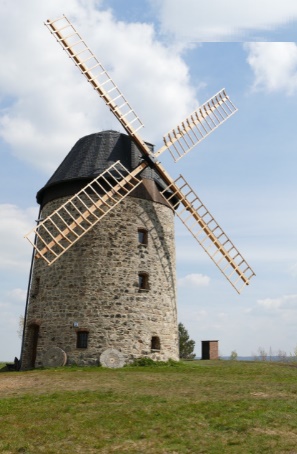 Holland is a land of windmills. These windmills make use of the power of wind. They have been used to pump water from low-lying areas and to grind corn. About a hundred and fifty years ago, there were thousands of windmills across the Netherlands. Many were used to drain water from low-lying land. Very few remain today. Windmills have sails which turn a shaft. This is connected by gear wheels and another shaft to a pump, a stone for grinding corn. Windmills are still used in many parts of the world for pumping water from wells and drainage ditches.