In nature, microorganisms usually exist as complex multispecies community. A single species has to be characterized in order to know the morphology, pathogenicity and molecular genomic pattern of the organism. For characterizing a species we have to isolate the organisms in pure form. Pure culture or axenic culture is a culture containing only one type of organism. The descendents of a single organism in pure culture is called a strain. A strain forms a single colony. Colony is a cluster of microorganisms in which all the characters of the family remain same. With the advent of the pure culture techniques many microorganisms are being identified.

Methods Employed in the Isolation of Microorganisms

Though there are many methods designed for isolation of microorganisms, pour plate method, spread plate method and streak plate method are widely used in the field of Microbiology.

·        It is the used for the isolation and counting of colony forming bacteria in the specified sample.

·        In this technique a sample is diluted several times to reduce the density of the microbial population.

·        The mixture is poured into the sterile petridish (In 1887, Juluis Richard Petri, a worker in Koch’s laboratory, designed the Petriplate.) in an aseptic condition and plates are incubated at a specific temperature for a given period of time.

·        After incubation, the colonies are formed in a discrete pattern both on the surface of agar and also embedded within the medium.

i)  Loss  of  viability  of  heat  sensitive organisms  coming  into  contact  with hot agar.

ii) Reduced growth of obligate aerobes in the depth of agar.

iii) Colonies embedded within the agar are much smaller than that of surface and may be confluent or invisible.

·        Spread plate method is an easy and direct method of isolating a pure culture.

·        In this technique a specified amount of diluted inoculum (0.1ml or less) of microbial culture is seeded on agar plate.

·        After inoculation of the sample on the agar medium, the inoculum is evenly spread on the surface with the help of a sterile glass L rod (a bent glass rod)

·        Microorganisms are evenly distributed in the entire surface of agar.

·        In this method, the plates are incubated at a specified temperature for a given period of time.

·        After incubation the plates are observed for the growth of discrete colonies.

·        The number of colonies are equal to the number of viable organism. This method can be used to count the microbial population (Figure 5.11).

·        The streak plate technique is one of the most commonly used methods for isolating pure culture of bacteria.

·        In  this  method,  a loopful of inoculum from a sample is taken and it is streaked across the surface of the sterile solid medium.

·        Different streaking patterns can be used to separate individual bacterial cell on the agar surface.

·        Similar process is followed for streaking the further areas in the sectors.

·        Since the inoculum is serially diluted during streaking patterns the dilution gradient is established across the surface of the medium.

·        After streaking, plates are incubated at a specific temperature for a given period of time.

·        After incubation, plates are observed for growth of colonies (based on the streaking pattern and density of culture growth of microbes are abundant in the first sector in comparison with the formation of separated discrete colonies in the fourth sector of the agar medium).

·        Each isolated colony is assumed to be grown from a single bacteria and thus represent a clone of pure culture. 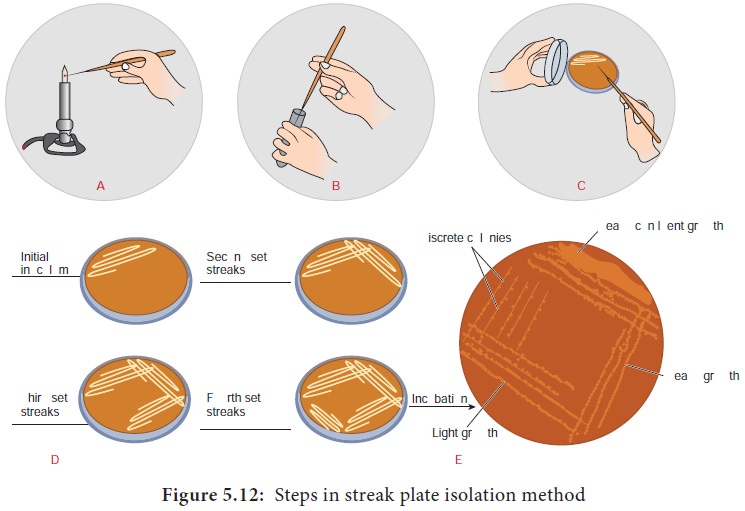