Bacteriological Media and its Types

Bacteriological Media and its Types

Generally microorganisms occur as mixed culture in nature. Human beings, animal bodies and other natural resources harbour microbes in mixed population. By using appropriate media, microorganisms can be grown separately in pure form and can be studied. For successful cultivation of a given microorganism, it is necessary to understand the nutritional requirements of that microorganism and then supply the essential nutrients in proper form and proportions in culture medium. Flowchart 5.1 describes the types of media. A common bacteriological medium has Carbon and Nitrogen sources along with buffering agents. Most of the media are prepared using dehydrated components. The basic components are peptone, beef extract, meat extract, yeast extract and agar (Table 5.1). 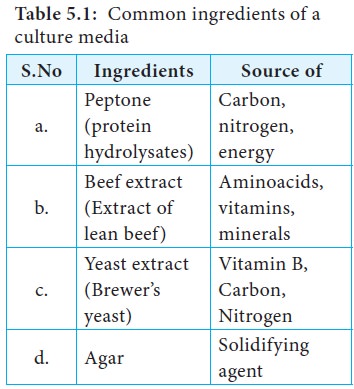 ·        It is one of the principle ingredients in the preparation of solid or semisolid media.

·        It is extracted from certain seaweeds belonging to genera of red algae like Gelidium and Gracilaria (Figure 5.1). 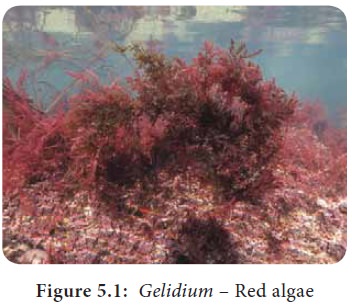 ·        It is a sulphated polymer mainly consisting of D-galactose.

·        Agar is a highly preferred solidifying agent because it does not affect the growth of microorganisms. Agar is also used in the food and pharmaceutical industries.

·        The purified form of the agar is called Agarose. It is prepared by removing the pectin from the Agar. It is used in Molecular Biology laboratory for the separation of DNA molecules by gel electrophoresis. 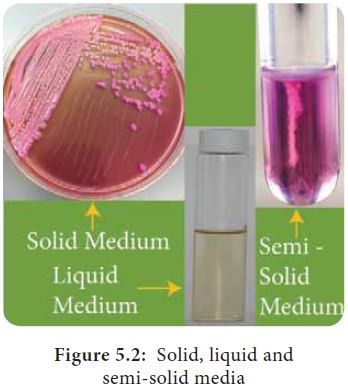 Chemically defined synthetic Medium is used for various experiments. This medium is prepared exclusively from pure substances with known chemical composition and concentrations. This is widely used in research to find the type of compound metabolized by the experimental organism.

The medium in which the exact chemical composition and the concentration of each ingredient is not certainly known is called non-synthetic medium. In this medium, crude materials such as meat extract, yeast extract, various sugars, molasses and corn steep broth are used. This supports the growth of a variety of microorganisms. It is otherwise called as complex medium.

This medium promotes the growth of many types of microorganisms which do not require any special nutrient supplement. It is a routine laboratory medium with Carbon and Nitrogen sources along with some minerals. Example: Nutrient Agar or Nutrient Broth. It is also called general purpose medium. It is used for subculturing the pathogens. It is a non-selective medium, which is designed to support the growth of a wide spectrum of heterotrophic organisms. (Figure 5.3) 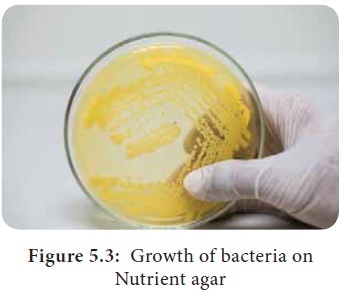 In enriched medium, substances like blood, egg or serum are added along with the basal medium. It is used to grow fastidious organisms that are very particular in their nutritional needs. Fastidious organisms have elaborate requirements of specific nutrients like vitamins and growth promoting subtances and or not easily pleased or satisfied by ordinary nutrients available in nature. Example: Blood agar is used to identify haemolytic bacteria (Figure 5.4) and Chocolate agar used to identify Neisseria gonorrhoeae. 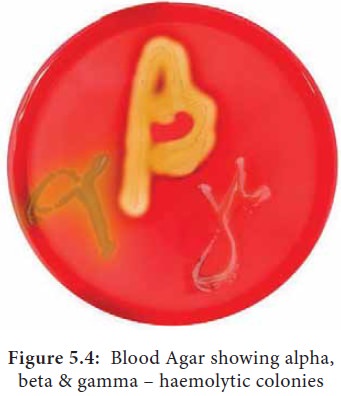 Selective medium contains one or more agents (selective components) that inhibit unwanted organisms but allow the desired organisms to grow. Growth of unwanted microbes is suppressed by adding bile salts, antibiotics and dyes. Example: Mannitol salt agar is selective for Staphylococci. This medium contains 7% Sodium chloride that inhibits the growth of other bacterial population but allows the growth of Staphylococci (Figure 5.5). Moreover it has Phenol red dye to indicate acid production. Staphylococcus utilizes Mannitol and produces acid which changes the colour of the Phenol red indicator to yellow. Salmonella-Shigella (SS) agar is selective for Salmonella (Figure 5.6). 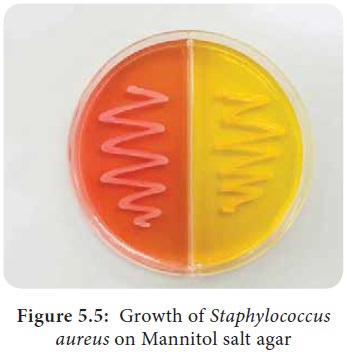 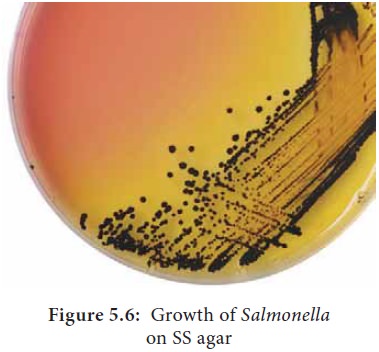 Differential medium distinguishes between different groups of bacteria and permit tentative identification of microorganisms based on their biological charaterstictics as they cause a visible change in the medium. We can differentiate haemolytic and non-haemolytic patterns of bacteria using blood agar. Differential medium is otherwise called indicator medium as it distinguishes one organism from another growing on the same plate by the formation of pigments due to its biochemical and physiological nature. Example: MacConkey agar medium has neutral red dye. Lactose fermentors form pink coloured colonies and non fermentors form colourless translucent colonies on it (Figure 5.7). 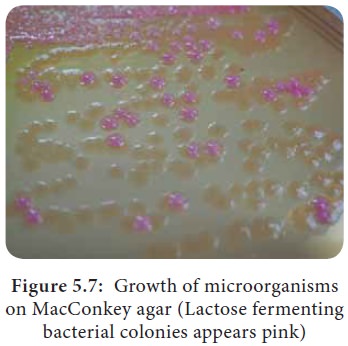 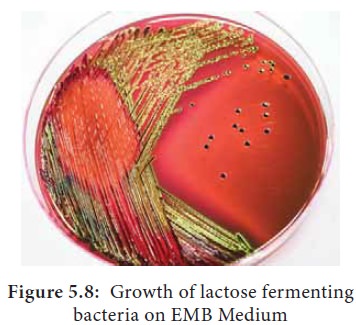 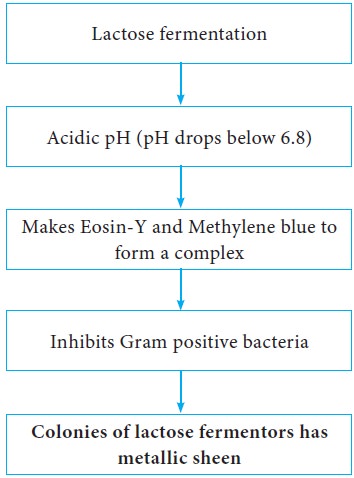 Enrichment medium is a liquid medium. It is used to grow a particular microorganism that is present in much smaller number along with others present in sufficiently large numbers. An enrichment medium provides nutrients and environmental conditions that favour the growth of a desired microorganisms. It is used to culture microorganisms present in soil or faecal samples that are very small in number. Example: Selenite F Broth is used to isolate Salmonella typhi present in low density in faecal sample. It is cultured in an enrichment medium containing Selenium. Selenium supports the growth of the desired organism and increase it to detectable levels compared to intestinal flora. Sodium selenite inhibits many species of Gram positive and Gram negative bacteria including Enterococci and coliforms.

Antibiotic sensitivity medium is a microbiological growth medium that is commonly used for antibiotic sensitivity testing. Example: Muller- Hinton agar medium. It is a non-selective and non-differential medium. It allows the growth of most type of microorganisms. It contains starch which absorbs toxins released from bacteria. Hence toxins do not interfere with antibiotics. Agar concentration of 1.7% is used in this media which allows better diffusion of antibiotics (Figure 5.9). 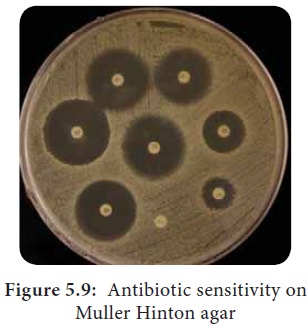 Anaerobic medium is a medium used for the cultivation of anaerobes, Example: i) Robertson cooked meat medium: This is used for the isolation of Clostridium ii) Thioglycolate broth: In this medium Sodium thioglycollate is used as a reducing agent which maintain a low Oxygen tension by removing the molecular Oxygen from the environment.

Transport medium is used for the temporary storage of specimens that are being transported to the laboratory for cultivation. It maintains the viability of all organisms in the specimen without altering their concentration. It mainly contains buffers and salts. Example: Stuart’s transport medium that lacks Carbon, Nitrogen and organic growth factors. Other examples of transport media are Cary Blair and Amies.

Exceptions in cultivation of microbes in artifical medium

Some bacteria like Mycobacterium leprae and Treponema pallidum cannot be cultivated in artificial medium. 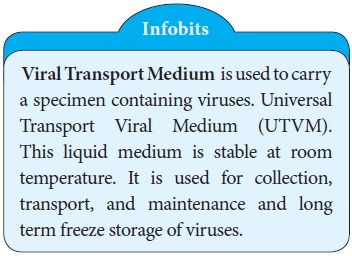