Pteridophyta, ferns and allies, have approximately 12,000 species and six classes.

Pteridophyta, ferns and allies, have approximately 12,000 species and six classes(Fig.6.5). They have a sporic life cycle with sporophyte predominance whereas their gametophytes are often reduced to prothallium, small hornwort-like plant. Another frequent variant is the underground, mycoparasitic gametophyte. Pteri-dophyta (with one exception) have true roots. Most of them have vascular tis-sues and are homoiohydric. This is why seed plants together with ferns have a name vascular plants. Pteridophyta sporophytes always start their life from an embryo located on the gametophyte. While Pteridophyta have true xylem and phloem, they do not have developed secondary thickening.

Most ancient pteridophytes appeared in Silurian period, they were rhyniophytes. Rhyniophyles had well-developed aboveground gametophytes and relatively short, dichotomously branched leafless sporophytes. The next important steps were formation of leaves and further reduction of gametophytes. 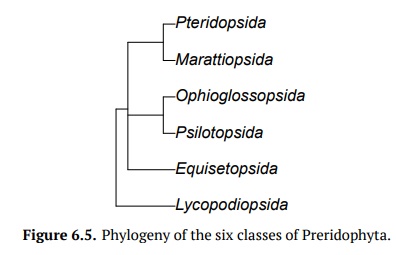 Lycopodiopsida, or lycophytes have at least four genera and more than 1,200species. Lycophytes belong to microphyllous lineage of pteridohytes. This means that their leaves originated from the emergences of the stem surface, and therefore are more similar to moss leaves than any other leaves of pteridophytes and seed plants. Lycophyte sporangia are associated with leaves and often form strobilus which is a condensation of sporangia-bearing leaves (sporophylls when they are leaf-like orsporangiophores when they are divergent). Their spermatozoon usually has 2 flagella (like mosses) but are sometimes also mul-tiflagellate (like spermatozoa of other ferns). Lycophytes used to be the domi-nant plants of Carboniferous tropical swamp forests and their remains became coal. Contemporary lycophytes are much smaller but still thrive in wet and warm places. More basal lycophytes (clubmosses Huperzia and Lycopodium) have equal spores and underground gametophytes, whereas more advanced Selaginella (spike-moss) and Isoëtes (quillwort) are both heterosporous (see below) with reduced aboveground gametophytes. Quillwort is a direct descendant of giant Carbonif-erous lycophyte trees, and despite being an underwater hydrophyte, it still re-tains the unusual secondary thickening of stem. Many spike mosses are poikilo-hydric (another similarity with mosses).

Psilotopsida (whisk ferns) is a small tropical group which consists of only twogenera, Psilotum and Tmesipteris, with only seven different species. They are herbaceous plants that grow as epiphytes. Whisk ferns are homosporous, and their sporangia are fused into synangia. Psilotopsida have protostele like the some lycophytes, and long-lived underground gametophytes; they also have multiflagellate spermatozoa similar to all other ferns. Both Psilotum and Tmesipteris lack roots; in addition, Psilotum also lacks leaves.

Ophioglossopsida (tongue ferns) is a small group that consists of approximately75 species, and are closest relatives to whisk ferns. Unlike true ferns, their young leaves are not coiled. Ophioglossopsida have an underground rhizome (some-times with traces of secondary thickening) with aboveground bisected leaves: one half of each leaf is the leaf blade while the other half becomes the sporophyll. The gametophytes also grow underground. Ophioglossum vulgatum, known also as the adder’s tongue fern, has chromosome number 2n = 1, 360, which is the largest chromosome number ever!

Equisetopsida (horsetails) is a small group with one genus,Equisetum, and hasabout 30 different herbaceous species that typically live in moist habitats. The leaves of these plants are reduced into scales, and the stems are segmented and also photosynthetic; there is also an underground rhizome. The stem epider-mis contains silica which makes it have an abrasive surface, and because of this, American pioneers would use this plant to scour pots and pans. This is how it received the nickname “scouring rush.” The stem has multiple canals, this is somehow similar to stems of grasses. The sporangia are associated with hexan-gular stalked sporangiophores; there are also elaters which are not separate cells but parts of the spore wall. Gametophytes are typically minute and dioecious, but the plants themselves are homosporous: smaller suppressed gametophytes develop only antheridia while larger gametophytes develop only archegonia.

Marattiopsida (giant ferns) are tropical plants, with several genera and about100 species. These are similar to true ferns and have compound leaves that are coiled when young. They are also the biggest ferns, as one leaf can be six meters in length. They have short stems, and leaves with stipules. Their sporangia are located on the bottom surface of leaves (like in true ferns). Unlike true ferns, sporangia are fused into synangia. Gametophytes are relatively large (1–2 cm), photosynthetic, and typically live for a long time. These ferns were also impor-tant in the Carboniferous swamp forests.

Pteridopsida (true ferns) have more than 10,000 species and make up the major-ity of living monilophytes (all classes of Pteridophyta except lycophytes). Their leaves are called fronds because of apical growth; young leaves are coiled into fiddleheads (Fig.6.6). True ferns are megaphyllous: their leaves originatedfrom flattened branches. True ferns have unique sporangia: leptosporangia. Leptosporangia originate from a single cell in a leaf, they have long, thin stalks, and the wall of one cell layer; they also open actively: when sporangium ripens (dries), the row of cells with thickened walls (annulus) will shrink slower than surrounding cells and finally would break and release all spores at once. Lep-tosporangia are also grouped in clusters called sori which are often covered with umbrella- or pocket-like indusia. Gametophytes of Pteridopsida are minute and grow aboveground. Some genera of true ferns (like mosquito fern Azolla, water shamrock Marsilea and several others) are heterosporous. 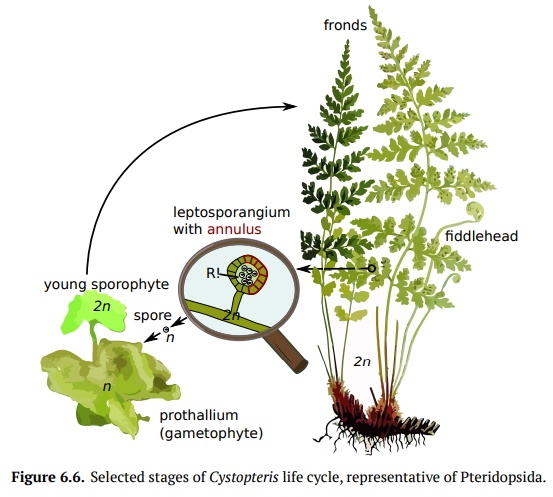 True ferns are highly competitive even to angiosperms. Despite their “primi-tive” life cycle, they have multiple advantages: abilities to photosynthesize in deep shade (they are not obliged to grow fast), to survive high humidity, and to make billions of reproductive units (spores). Ferns do not need to spend their resources on flowers and fruits, and are also less vulnerable to vertebrate herbi-vores and insect pests, probably because they do not employ them as pollinators and, therefore, can poison tissues against all animals.

Vertebrate animals became fully terrestrial (amphibians became first reptiles) only when their fertilization became completely independent from water. Plants started to perform the similar “evolutionary efforts” even earlier, but while rep-tiles actively approach the sexual partner, plants cannot do the same because their tissues and organs evolved for completely different purposes. Instead of the active sex, plants use “carpet bombing” with spores; this was invented to in-crease the chance that two spores land nearby and the distance between sperm and egg cell will be minimal.

However, since simple increase in the number of spores is a great waste of re-sources, plants minimized spore size; this will also allow for the longer distance of dispersal. On the other hand, some spores must remain large because em-bryo (if fertilization occurs) will need the support from the feeding gameto-phyte. Consequently, plants ended up with division of labor: numerous, mi-nuscule male spores which grow into male gametophytes with antheridia only, and few large female spores which make female gametophytes producing only archegonia. Altogether, this heterosporic (Fig. 6.7) cycle makes fertilization less dependent on water and more dependent on spore distribution and game-tophyte features. 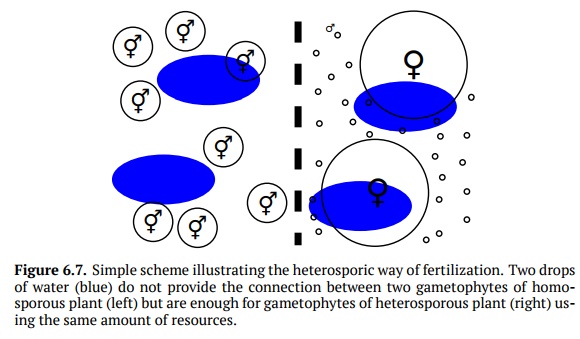 This division of labor allows resources to be used more efficiently and also re-stricts self-fertilization. In the plant evolution, there was a high need for het-erospory because it independently arose in several groups of pteridophytes and even among mosses. In the extreme cases of heterospory (Fig. 6.8), a female spore does not leave the mother plant and germinate there, “waiting” for the fertilization from the male gametophyte developed nearby; in fact, this is incip-ient pollination, the step towards the seed. 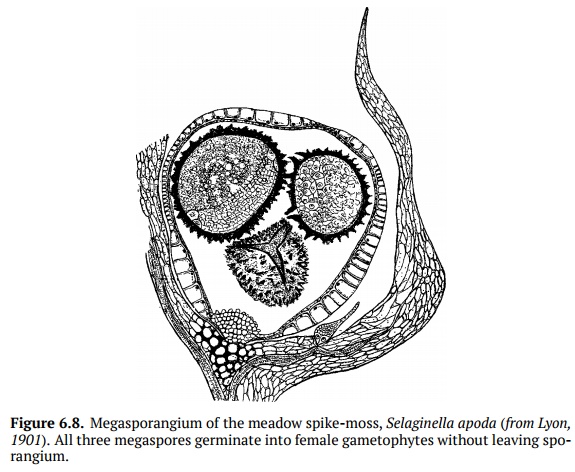 Heterosporous plants produce one female spore, megaspore, which is rich in nutrients; megaspores are not widely dispersed, but the female gametophyte that comes of it provides nutrition and protection for the zygote, embryo, and young sporophyte. Heterosporic life cycle (Fig. 6.9) starts with a male game-tophyte and a female gametophyte, both of which produce gametes. Once fer-tilization occurs, a zygote develops into sporophyte. The sporophyte will then produce two different sporangia types: female megasporangia and male mi-crosporgangia. Meiosis in megasporangium will frequently result inonefemalespore, megaspore (similar to the meiosis in the ovaries of vertebrate animals), whereas in the microsporangium, meiosis and subsequent mitoses will make nu-merous microspores; both the megaspore and microspores will develop into gametophytes and the cycle will repeat. 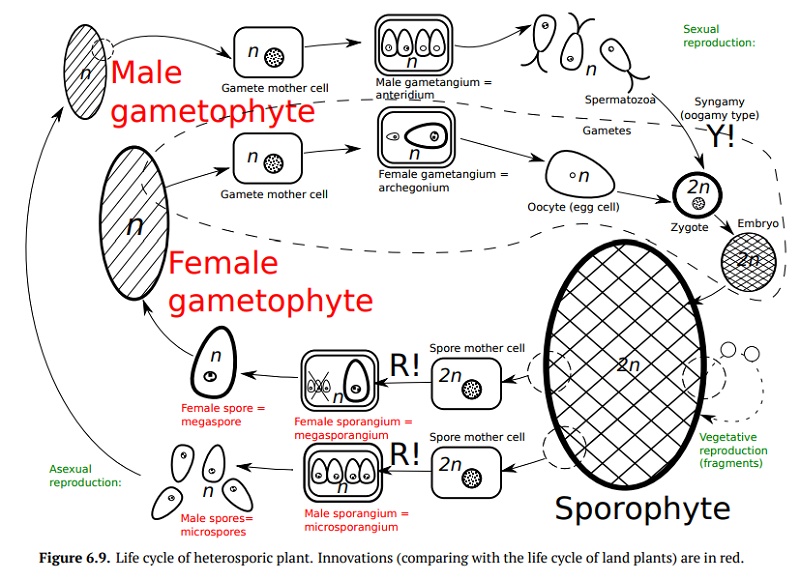