Bryophyta has approximately 20,000 species. They do not have roots, but have long dead cells capable of water absorbency via apoplastic transport, these cells are called rhizoid cells. Their sporophyte is reduced to sporogon, which is simply a spo-rangium with seta (stalk), and is usually parasitic. Gametophyte of bryophytes starts its development from a protonema, thread of cells. Bryophyta are poik-ilohydric; they go through dehydration or extremely low water concentration without any serious physiological damage to the plant.

Bryophyta Life cycle of mosses is similar to the general life cycle of land plants described above. They begin with a gametophyte with an archegonia and antheridia. The antheridium produces biflagellate spermatozoa which fertilizes the egg and pro-duces diploid zygote; zygote grows into a sporogon and its cells (mother cells of spores) go through meiosis which produces haploid spores. Spores will be dis-tributed with the wind, land on the substrate and germinate into protonema stage which then develops into a green, well-developed gametophyte. Most of moss gametophytes have a shoot body that consists of a stem and leaves (but no roots) while others have a thallus body, which is a flat, leaf-like, and undifferen-tiated structure.

Hepaticae are phylogenetically closest to green algae. Their thallus typicallyhas dorsal and ventral parts, and the sporogon is bag-like. Inside the sporangium, there is no central column (columella) but elaters are present, which are cells that loosen spores. One of the most widespread liverwort is Marchantia, it is commonly found in wet shady places. It became a frequent weed in greenhouses. 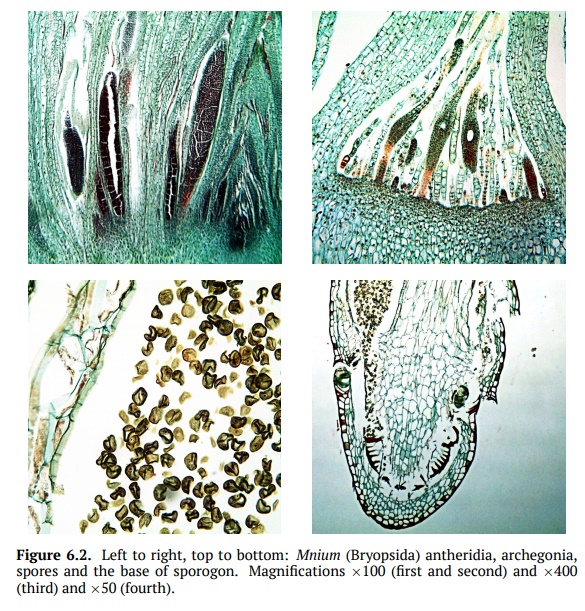 Bryophytina consists of multiple classes, the most important are Sphagnop-sida—peat mosses, Polytrichopsida—hair cap mosses, and Bryopsida—greenmosses (Fig. 6.2). Bryophytina have a radially structured shoot-like body with a stem and thin leaves. Their sporogon is long and has columella, but does not have elaters. Sporogons of true mosses are usually supplied with peristome, structure which helps in spore distribution. Some advanced true mosses (hair cap moss, Polytrichum) have tall gametophyte with proto-vascular tissues, while others (stinkmoss, Splachnum) employ insects for the distribution of spores. Peat moss (Sphagnum) is probably the most economically important genus of Bryophyta. 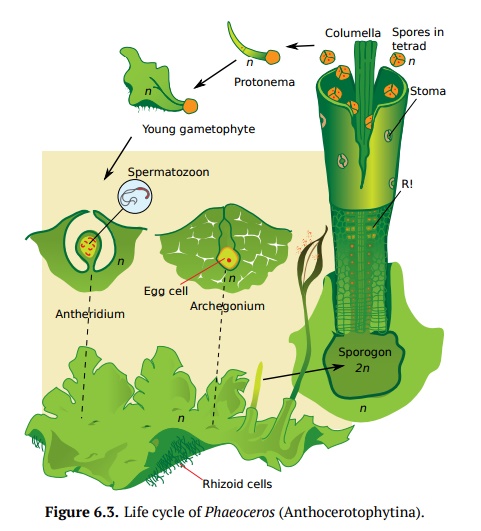 Anthocerotophytina (Fig.6.3)evolutionary are closests to the next phylum,Pteridophyta (ferns and allies). Hornworts have a flattened thallus body, their long photosynthetic sporogon has columella and elaters. The presence of stom-ata on sporogons and the ability of some hornwort sporogons to branch and sometimes even live independently from the gametophyte provide a support for the advanced position of this group. Hornworts are rare and quite small (first millimeters in size), and like liverworts, they prefer shady and wet places.

Mosses have become known as the “evolutionary dead end” because their poik-ilohydric gametophyte requires water for fertilization and does not have a root system; this restricts the size and requires dense growing. However, if the sex-ual organs are near the soil surface, then the parasitic sporogon would not grow tall enough, and consequently would not be able to effectively distribute spores with the wind. The only way to fix the situation properly would be to make the sporophyte taller and reduce dominance of the gametophyte. This is done in ferns (Fig. 6.4). 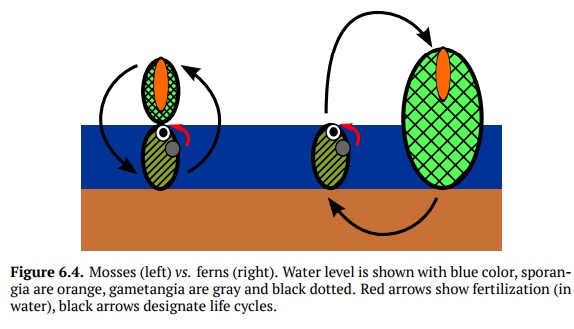