Two groups of stimulants are currently approved by the FDA for treatment of ADHD in children, and are available in both brand and generic.

Two groups of stimulants are currently approved by the FDA for treatment of ADHD in children, and are available in both brand and generic. These include: the amphetamines (Adderall, Dextrostat, Dexedrine) and the methylphenidates (Concerta, Metadate-ER, Metadate-CD, methylphenidate, Methylin, Ritalin, Ritalin-SR, Ritalin-LA and Focalin). Characteristics of these stimulants can be found in Table 82.1. Dextroamphetamine (DEX) andmethylphenidate (MPH) are structurally related to the catecholamines (DA and NE) (McCracken 1991). Signs of CNS stimulation, including blood pressure and heart rate increases, are more pronounced in adults. The term psychostimulant used for these compounds refers to their ability to increase CNS activity in some but not all brain regions. Stimulants ameliorate disruptive ADHD behaviors cross-situationally (classroom, lunchroom, playground and home) when repeatedly administered throughout the day. 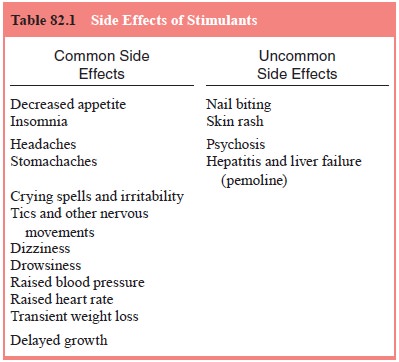 The term psychostimulant refers to the ability of these compounds to increase CNS activity in some but not all brain regions. For example, while increasing the activity of striatum and connections between orbitofrontal and limbic regions, stimulants seem to have an inhibitory effect on the neocortex. The CNS psychostimulant effects of DEX and MPH may result in part from their lack of benzene ring substituents. Prominent central effects include activation of the medullary respiratory center and a lessening of central depression from barbiturates.

Psychostimulants have been described as noncatecholamine sympathomimetics. Sympathomimetics show potent agonist effects at alpha- and beta-adrenergic receptors. Presynaptically, they cause a stoichiometric displacement of norepinephrine and dopamine from storage sites in the presynaptic terminal. Stimulants also block the reuptake of dopamine by the dopamine transporter (DAT). Postsynaptically, they function as direct agonists at the adrenergic receptor. They also block the action of a degradative enzyme, catechol-o-methyltransferase (COMT).

The putative action of psychostimulants in ADHD has been attributed to the release of DA and their ability to block its reuptake by the DAT at the presynaptic nerve terminal. Radioli-gand binding studies have demonstrated the direct action of psy-chostimulants, particularly MPH, on striatal DAT. The dopamine action of psychostimulants also explains the appearance of be-havioral stereotypies, seen at high doses. Tritiated MPH binding in rat brain is highest in striatum and is highly dependent on so-dium concentration, suggesting that MPH binding is associated with a neurotransmitter transport system.

Yet, no single theory explains the psychostimulant mecha-nism of action on the CNS which ameliorates ADHD symptoms.

Most hypotheses regarding the neurochemical basis of ADHD have focused on the catecholamines norepinephrine and dopamine. These hypotheses, which posit a dysregulation in the norepinephrine or dopamine neurotransmitter systems, or both, are based primarily on the success of these dopaminergic medications in treating ADHD. All stimulant medications used for treating ADHD have their primary effects on these two neurotransmitter systems. Furthermore, the more selective norepinephrine-acting tricyclic medications, such as desipramine and imipramine, as well as the alpha-2-adrenergic agonist clonidine, have all been found to reduce symptoms of ADHD in children. Similarly, although much less commonly used, dopamine-blocking antipsychotic medications also have been found to be effective for treating children with ADHD (Zametkin and Rapoport, 1987).

Psychostimulants are rapidly absorbed from the gut and thus act quickly, often within the first 30 minutes after ingestion. Food enhances absorption. Due, in part, to MPH’s low plasma binding rate (15%), it is highly available to cross the blood–brain barrier. Effects on behavior appear during absorption, beginning 30 minutes after ingestion and lasting 3 to 4 hours. Half-lives range between 3 hours for MPH and 6 to 9 hours for d-amphetamine. The concentration-enhancing and activity-reducing effects of MPH can disappear well before the medication leaves the plasma, a phenomenon termed clockwise hysteresis.

MPH’s metabolism is rapid and complete because it is not highly bound to plasma protein and does not disappear into fat stores. MPH peaks in plasma in 2 to 2.5 hours and falls to half the peak (half-life) after 3 hours.

Because MPH’s short half-life prevents it from reaching steady state in the plasma, the standard tablet must be given several times a day to maintain behavioral improvement through-out the school day. Although the Physicians’ Desk Reference (PDR) suggests giving MPH before meals, standard administra-tion times are after breakfast (8:00 AM), after lunch (noon), and before homework (about 3:30 pm). See Table 82.2 for review of some of the pharmacokinetics of the psychostimulants used to treat children with ADHD.

Studies in adults taking d-amphetamine have shown a prolonga-tion of performance at repetitive tasks before the onset of fatigue, a decreased sense of fatigue, mood elevation, euphoria, and increased speech rate and initiative (Rapoport et al., 1980). The psychostimulants increase CNS alertness, as shown on tasks re-quiring vigilance, both in laboratory tasks, such as the CPT, and on the job, such as maintaining the ability to notice new events on a radar screen for periods of hours. These changes have been described as the drug’s ability to “increase capacity”, although this phrase has been misinterpreted to mean an increase over the person’s innate ability.

Psychostimulants have been abused by adults, but the risk for addiction by children with ADHD is low. Klein (1980) found that the psychostimulants differ in their ability to induce euphoria, with “dextroamphetamine the most euphorigenic, methylphenidate, less so, and magnesium pemoline, hardly at all.” Adolescents and young adults with ADHD do not list the psychostimulants among medications used recreationally, whether or not they had received treatment with psychostimu-lants. Adolescents previously diagnosed as having ADHD during their school-age years are at greater risk for substance abuse than control subjects, but those who do abuse medications tend not to pick stimulants.

Even though the evidence from the literature suggests that the abuse potential of psychostimulants by children with ADHD is low, DEX and MPH have been classified by the US Food and Drug Administration as potentially drugs of abuse (schedule II) and have warnings concerning abuse in the PDR. MPH was re-classified as a schedule II medication in 1971 because of a con-cern that the order by the Bureau of Narcotics and Dangerous Drugs to schedule methamphetamine and DEX would direct po-tential drug abusers to MPH. As a schedule II medication, the annual amount of stimulant medication manufactured must be approved or allocated.