There are two main indications for the use of MPH: narcolepsy and ADHD. Other stimulants differ somewhat, with the indica-tions for methamphetamine (Desoxyn Gradumets) including ADHD and obesity.

What Is Being Treated

There are two main indications for the use of MPH: narcolepsy and ADHD. Other stimulants differ somewhat, with the indica-tions for methamphetamine (Desoxyn Gradumets) including ADHD and obesity.

Diagnosis of the Stimulant-treatable Disorders

ADHD is a heterogeneous behavioral disorder of unknown etiol-ogy. As its name suggests, ADHD is characterized by inattention, impulsivity and hyperactivity of varying severity. The disorder, which typically begins in early childhood and lasts into adult-hood in a substantial minority, if not a majority, of cases, fre-quently leads to profound social and academic impairments. For a complete discussion of the ADHD diagnosis, see Chapter 28.

Narcolepsy is a chronic neurological disorder that presents with excessive daytime sleepiness and various problems of rapid eye movement physiology, such as cataplexy (unexpected decreases in muscle tone), sleep paralysis and hypnagogic hallucinations, which are intense dream-like imagery before falling asleep (Dahl, 1992). For a more complete discussion of narcolepsy. The prevalence is estimated to be 90 in 100 000. Treatment can include a regular schedule of naps; counseling of family, school and patient; and use of medications, including stimulants and rapid eye move-ment-suppressant drugs such as protriptyline. Dahl recommended beginning with standard, short-acting stimulants, such as MPH, 5 mg b.i.d., and increasing the dose up to 30 mg b.i.d. if need be.

Selection of a Stimulant Medication as a Treatment Modality

Deciding to Use Medication

The decision to use stimulant medication in the treatment of ADHD employs different criteria for each developmental stage. The criteria for use of stimulants in school-age children and adolescents are well described in the DSM-IV-TR. More difficulty arises when deciding whether to use these medications in preschool children, adult patients, patients with mental retardation, or children with ADHD and comorbid disorders.

Use of Psychostimulants in Children Younger than 6 Years

Unfortunately, there are only a handful of published treatment studies on preschoolers. No dose-ranging pharmacokinetic stud-ies have been done in this age group to determine if younger chil-dren, with their larger liver-to-body size ratio, might show more accelerated metabolism of psychostimulants than seen in older children. Therefore, the optimal doses for this age group are not known. To date there are no studies that would validate or refute clinicians’ concerns that preschoolers suffer more pronounced stimulant withdrawal effects.

The prevalence of ADHD in adults, its severity and indications for treatment are issues that are not known. Although it had been assumed that children with ADHD outgrow their problems, prospective follow-up studies have shown that ADHD signs and symptoms continue into adult life for as many as 60% of children with ADHD (American Psychiatric Association, 1980). However, only a small percent of adults impaired by residual ADHD symptoms actually meet the full DSM-IV childhood criteria for ADHD (Hill and Schoener, 1996). Adults with concentration problems, impulsivity, poor anger control, job instability and marital difficulties sometimes seek help for problems they believe to be the manifestation of ADHD in adult life. Parents may decide that they themselves are impaired by the same attentional and impulse control problems found during an evaluation of their ADHD children.

A variety of medications have been used to treat adults with ADHD. Physicians should be cautious in the use of these agents until proof of efficacy is available. Of particular concern is the danger of using psychostimulants in adults with comorbid substance abuse disorder. It would be wise to use MPH because of its relatively low abuse potential, and because it has been shown in controlled studies to significantly reduce the symptoms of ADHD in adults (see Table 82.3.) 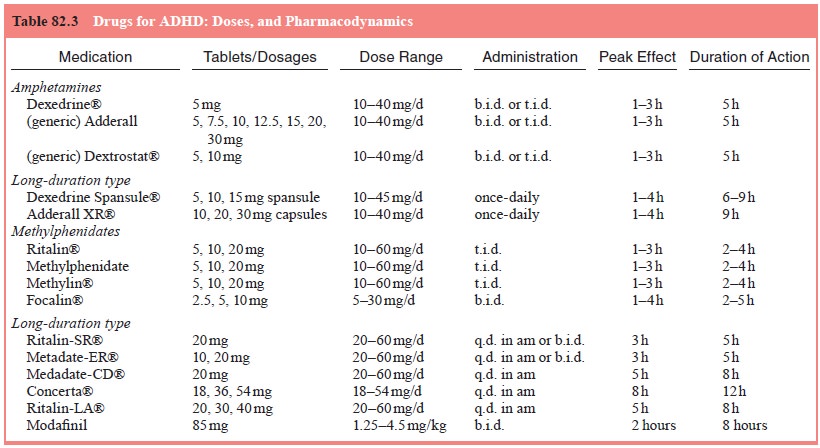 Standard package instructions for using MPH warns against its use in patients with tics or in patients with a family history of tics. Patients with Tourette’s syndrome often have comorbid ADHD. If the two conditions co-occur, concern arises that stimulant treat-ment – because of its dopamine agonist actions – might unmask, trigger, accelerate, or precipitate more severe tics.

Tics are unacceptably worsened for a minority of comorbid children, although reversibly, and the majority of such comorbid children can be treated cautiously with low-to-moderate doses of stimulants, particularly MPH (Comings and Comings, 1987).

Many stimulant treatment studies for school-age children with ADHD exclude children with full-scale IQs below 70, who are considered to have mental retardation (MR). This is unfortunate, for the signs of ADHD are far more prevalent in children with IQs in the MR range (Aman et al., 1991). Pharmacotherapy reviews involving patients with MR have reported that institutionalized subjects with severe or profound MR respond poorly to stimulants. However, studies involving community samples of children with MR, have shown that these children do respond to MPH. It appears that children with ADHD who have mild or moderate MR may be more vulnerable to certain stimulant-related adverse side effects.

Does Comorbidity Affect the Indications for the Use of Stimulant Medication?

ADHD children that are referred from other physicians may have other Axis I psychiatric disorders. Extensive literature reviews report that ADHD co-occurs with conduct and oppositional defi-ant disorder in 30 to 50% of cases, with mood disorders in 15 to 75% of cases, with anxiety disorders in 25% of cases and with learning disabilities in 15 to 30% of cases. Clinicians should be aware that co-morbid ADHD/anxiety disorders may result in lesser response to treatment more side effects.