The care was primarily custodial and focused on nutrition, hygiene, and activity.

In 1873, Linda Richards graduated from the New England Hospital for Women and Children in Boston. She went on to improve nursing care in psychiatric hospitals and orga-nized educational programs in state mental hospitals in Illi-nois. Richards is called the first American psychiatric nurse; she believed that “the mentally sick should be at least as well cared for as the physically sick” (Doona, 1984).

The first training of nurses to work with persons with mental illness was in 1882 at McLean Hospital in Belmont, Massachusetts. The care was primarily custodial and focused on nutrition, hygiene, and activity. Nurses adapted medical– surgical principles to the care of clients with psychiatric dis-orders and treated them with tolerance and kindness. The role of psychiatric nurses expanded as somatic therapies for the treatment of mental disorders were developed. Treat-ments, such as insulin shock therapy (1935), psychosurgery (1936), and electroconvulsive therapy (1937), required nurses to use their medical–surgical skills more extensively.

Two early nursing theorists shaped psychiatric nursing practice: Hildegard Peplau and June Mellow. Peplau pub-lished Interpersonal Relations in Nursing in 1952 and Inter-personal Techniques: The Crux of Psychiatric Nursing in 1962. She described the therapeutic nurse–client relationship with its phases and tasks and wrote extensively about anxiety . The interpersonal dimension that was crucial to her beliefs forms the foundations of practice today.

Mellow’s 1968 work, Nursing Therapy, described her approach of focusing on clients’ psychosocial needs and strengths. Mellow contended that the nurse as therapist is particularly suited to working with those with severe mental illness in the context of daily activities, focusing on the here and now to meet each person’s psychosocial needs (1986). Both Peplau and Mellow substantially con-tributed to the practice of psychiatric nursing.

In 1973, the division of psychiatric and mental health practice of the American Nurses Association (ANA) devel-oped standards of care, which it revised in 1982, 1994, 2000, and 2007. Standards of care are authoritative state-ments by professional organizations that describe the responsibilities for which nurses are accountable. They are not legally binding unless they are incorporated into the state nurse practice act or state board rules and regula-tions. When legal problems or lawsuits arise, these profes-sional standards are used to determine safe and acceptable practice and to assess the quality of care. 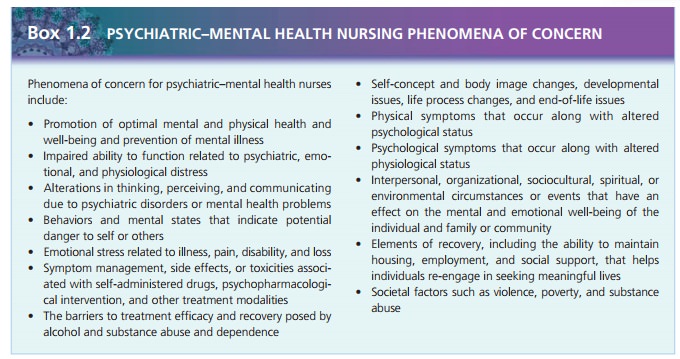 This document also outlines the areas of practice and phenomena of concern for today’s psychiatric–mental health nurse. The phenomena of concern describe the 13 areas of concern that mental health nurses focus on when caring for clients. The standards of care incorporate the phases of the nursing process, including specific types of interventions, for nurses in psychiatric settings and outline standards for professional performance: quality of care, per-formance appraisal, education, collegiality, ethics, collabo-ration, research, and resource utilization. 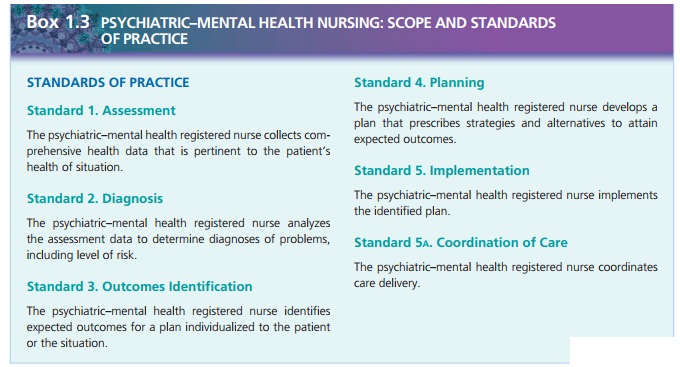 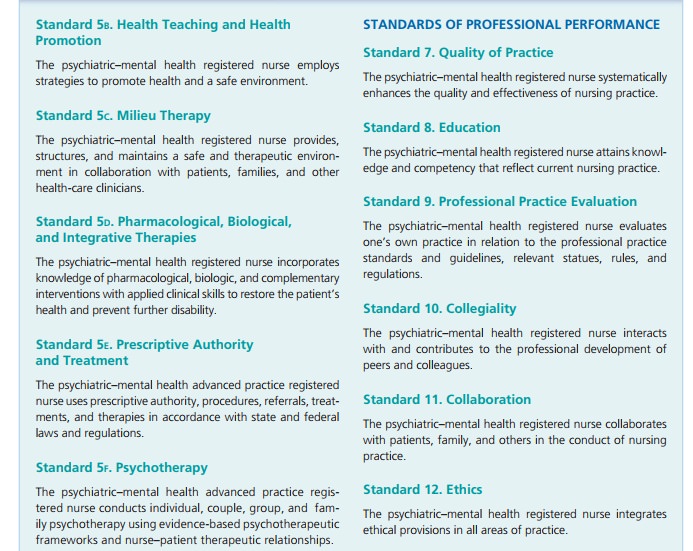