Figure 7.3 illustrates the two methods. In each case, the seed consists of two parts: the encryption key value and a value V that will be updated after each block of pseudorandom numbers is generated. Thus, for AES-128, the seed consists of a 128-bit key and a 128-bit V value. In the CTR case, the value of V is incremented by 1 after each encryption. In the case of OFB, the value of V is updated to equal the value of the preceding PRNG block. In both cases, pseudorandom bits are produced one block at a time (e.g., for AES, PRNG bits are generated 128 bits at a time). 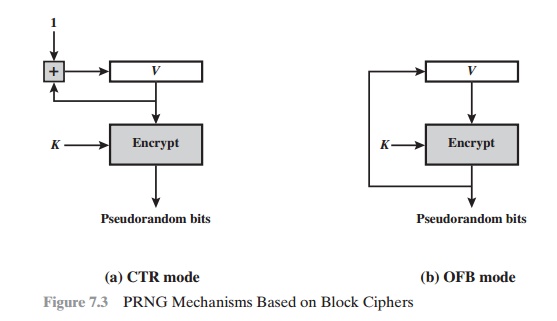 The CTR algorithm for PRNG can be summarized as follows.

while (len (temp) < requested_number_of_bits) do

The OFB algorithm can be summarized as follows.

while (len (temp) < requested_number_of_bits) do

To get some idea of the performance of these two PRNGs, consider the fol- lowing short experiment. A random bit sequence of 256 bits was obtained from random.org, which uses three radios tuned between stations to pick up atmospheric noise. These 256 bits form the seed, allocated as

For the OFB PRNG, Table 7.2 shows the first eight output blocks (1024 bits) with two rough measures of security. The second column shows the fraction of one bits in each 128-bit block. This corresponds to one of the NIST tests. The results indi- cate that the output is split roughly equally between zero and one bits. The third column shows the fraction of bits that match between adjacent blocks. If this num- ber differs substantially from 0.5, that suggests a correlation between blocks, which could be a security weakness. The results suggest no correlation.

Again, the results are favorable.

One of the strongest (cryptographically speaking) PRNGs is specified in ANSI X9.17. A number of applications employ this technique, including financial security applications and PGP (the latter described in Chapter 18).

Figure 7.4 illustrates the algorithm, which makes use of triple DES for encryption. The ingredients are as follows. 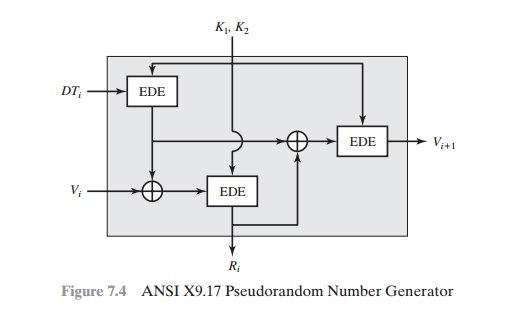 Let us define the following quantities.

Several factors contribute to the cryptographic strength of this method. The technique involves a 112-bit key and three EDE encryptions for a total of nine DES encryptions. The scheme is driven by two pseudorandom inputs, the date and time value, and a seed produced by the generator that is distinct from the pseudorandom number produced by the generator. Thus, the amount of material that must be com- promised by an opponent is overwhelming. Even if a pseudorandom number Ri were compromised, it would be impossible to deduce the Vi + 1 from the Ri, because an additional EDE operation is used to produce the Vi + 1.