Now, read this amusing story about the frustrations of a globetrotter and find out how he faces chaos in his everyday life.

Of all the things I am not very good at, living in the real world is perhaps the most outstanding. I am constantly filled with wonder at the number of things that other people do without any evident difficulty that are pretty much beyond me. I cannot tell you the number of times that I have gone looking for the lavatory in a cinema, for instance, and ended up standing in an alley on the wrong side of a self-locking door. My particular specialty now is returning to hotel desks two or three times a day and asking what my room number is. I am, in short, easily confused. 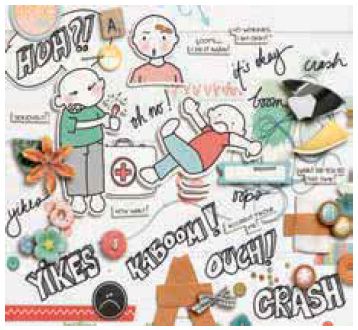 I was thinking about this the last time we went en famille on a big trip. It was at Easter, and we were flying to England for a week. When we arrived at Logan Airport in Boston and were checking in, I suddenly remembered that I had recently joined British Airways’ frequent flyer programme. I also remembered that I had put the card in the carry-on bag that was hanging around my neck. And here’s where the trouble started.

The zip on the bag was jammed. So I pulled on it and yanked at it, with grunts and frowns and increasing consternation. I kept this up for some minutes but it wouldn’t budge, so I pulled harder and harder, with more grunts. Well, you can guess what happened. Abruptly the zip gave way. The side of the bag flew open and everything within — newspaper cuttings and other loose papers, a 14- ounce tin of pipe tobacco, magazines, passport, English money, film — was extravagantly ejected over an area about the size of a tennis court. 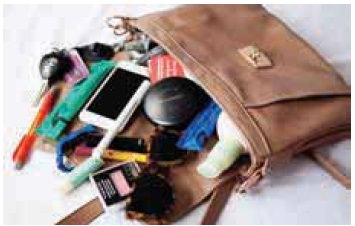 I watched dumbstruck as a hundred carefully sorted documents came raining down in a fluttery cascade, coins bounced to a variety of noisy oblivions and the now-lidless tin of tobacco rolled crazily across the concourse disgorging its contents as it went.

“My tobacco!” I cried in horror, thinking what I would have to pay for that much tobacco in England now that another Budget had come and gone, and then changed the cry to “My finger! My finger!” as I discovered that I had gashed my finger on the zip and was shedding blood in a lavish manner. (I am not very good around flowing blood generally, but when it’s my own — well, I think hysterics are fully justified.) Confused and unable to help, my hair went into panic mode.

It was at this point that my wife looked at me with an expression of wonder — not anger or exasperation, but just simple wonder — and said, “I can’t believe you do this for a living.”

But I’m afraid it’s so. I always have catastrophes when I travel. Once on an aeroplane, I leaned over to tie a shoelace just at the moment someone in the seat ahead of me threw his seat back into full recline, and found myself pinned helplessly in the crash position. It was only by clawing the leg of the man sitting next to me that I managed to get myself freed. 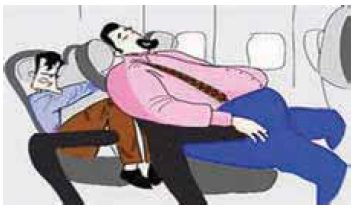 This, however, was not my worst experience on a plane flight. My worst experience was when I was writing important thoughts in a notebook (‘buy socks’, ‘clutch drinks carefully’, etc.), sucking thoughtfully on the end of my pen as you do, and fell into conversation with an attractive young lady in the next seat. I amused her for perhaps 20 minutes with a scattering of urbane bons mots, then retired to the lavatory where I discovered that the pen had leaked and that my mouth, chin, tongue, teeth and gums were now a striking, scrub-resistant navy blue, and would remain so for several days.

So you will understand, I trust, when I tell you how much I ache to be suave. I would love, just once in my life, to rise from a dinner table without looking as if I have just experienced an extremely localised seismic event, get in a car and close the door without leaving 14 inches of coat outside, wear light-coloured trousers without discovering at the end of the day that I have at various times sat on chewing gum, ice cream, cough syrup and motor oil. But it is not to be.

Now on planes when the food is delivered, my wife says: “Take the lids off the food for Daddy” or “Put your hoods up, children. Daddy’s about to cut his meat.” Of course, this is only when I am flying with my family. When I am on my own, I don’t eat, drink or lean over to tie my shoelaces, and never put a pen anywhere near my mouth. I just sit very, very quietly, sometimes on my hands to keep them from flying out unexpectedly and causing liquid mischief. It’s not much fun, but it does at least cut down on the laundry bills.

I never did get my frequent flyer miles, by the way. I never do. I couldn’t find the card in time. This has become a real frustration for me. Everyone I know — everyone — is for ever flying off to Bali first class with their air miles. I never get to collect anything. I must fly 100,000 miles a year, yet I have accumulated only about 212 air miles divided between twenty-three airlines. 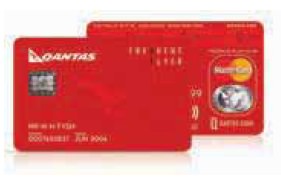 This is because either I forget to ask for the air miles when I check in, or I remember to ask for them but the airline then manages not to record them, or the check-in clerk informs me that I am not entitled to them. In January, on a flight to Australia — a flight for which I was going to get about a zillion air miles — the clerk shook her head when I presented my card and told me I was not entitled to any.

I explained to her the close and venerable relationship between *Bill and William, but she wouldn’t have it.

So I didn’t get my air miles, and I won’t be flying to Bali first class just yet. Perhaps just as well, really. I could never go that long without eating.

Often on formal occasions, we admire friends and strangers who appear elegant, who are pleasant to converse with and who conduct themselves gracefully. At times, we also see people who are awkward, nervous and doubtful about their next move.

Recall a few examples of awkward actions that can cause discomfort or disturbance to others like spilling a cup of hot drink on someone nearby.