A. Foreign words and phrases

You have come across the French phrases ‘en famille’  _ and ‘bons mots’ _ in the lesson. Now look at the following phrases and their meanings.

B. Refer to the dictionary and find out the meanings of the following foreign words / phrases. Use them in sentences of your own:

1.         Bon voyage: an expression of good wishes when someone leaves on a journey

Sentence: I wished bon voyage to my friend for his successful trip.

Sentence: My proposal was accepted by the management in toto.

3.         liaison: A person who acts as a link to assist communication between groups of people..

He is our liaison with a number of interested parties

The sum was paid ex gratia.

The government took the decision on an ad hoc basis.

Watching TV during eating is a faux pas in our family.

He praised her as the teacher par excellence

As the accused was only 14 years old, the trial was held in camera.

12.     magnum opus: the most important piece of work done by a writer or artist

‘The Jungle Book’ is considered to be a magnum opus of Rudyard Kipling’s.

13.     in cognito: in disguise or by changing your name or appearance

14.     deja vu: a feeling of having already experienced the present situation.

I entered the room and immediately felt a sense of deja vu.

15.     a-la-carte: practice of ordering separate dishes from a menu

You get more choices if you order from an a-la-carte menu.

16.     Via media: A middle way / compromise between extremes

He acts as a via media between theists and atheists.

17.     Per capita: used to refer the amount for each person

The sharp fall in per capita income was one of the signs of the financial crisis.

They two had a useful tete-a-tete yesterday.

19) Carte blanche: Complete freedom to act as one wishes or thinks best.

We gave the decorator carte blanche to furnish the house.

Here is a list of some words borrowed from Indian languages and have been included in the Dictionary of English. Add more words to the table. 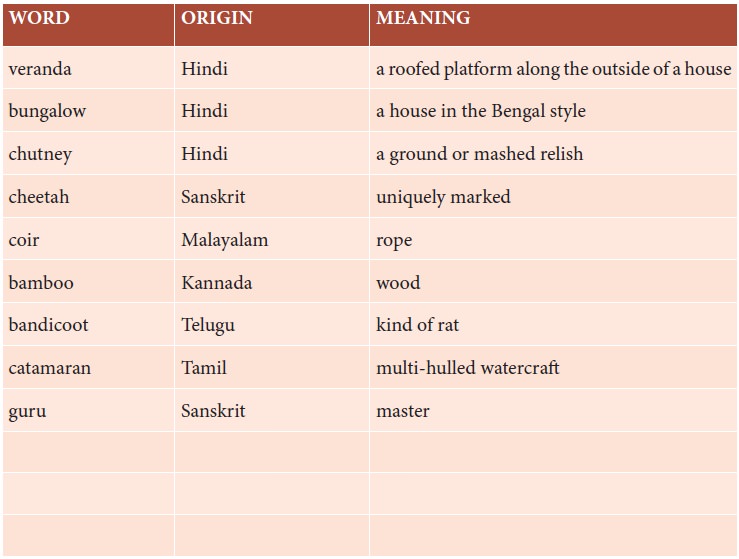 Look at the list of idioms given below. Find their meanings from a dictionary. Read the sentences that follow and replace the words in italics with the appropriate idioms, making suitable changes wherever necessary.

a.        The old man drove up the wall got irritated at the loud noise outside.

b.   We were driving, when it started raining heavily. After stopping for an hour, we hit the road began the journey again.

c.         Ramesh gave false excuses for not attending the meeting and too A me for a ride deceived me.

d.   At the interview when questions were fired at me rapidly, I in panic mode forgot everything and grew irritated.

e.         I love thrillers and this book is right up my alley appeals to me strongly.

b.         We were driving, when it started raining heavily. After stopping for an hour, we hit the road (began the journey again)

c.          Ramesh gave false excuses for not attending the meeting and too A me for a ride (deceived me)

d.         At the interview when questions were fired at me rapidly, I was in panic mode(forgot everything and grew irritated)