The Singing Lesson: Questions and Answers

Write an essay of about 200 words by developing the following hints:

Theme : Two different moods of a woman affected everyone.

Miss Meadows was the teacher of music in a school. She got a letter from her fiance, Basil. Basil stated that the marriage between himself and Meadows would be a mistake. So he had no intention of marrying her. She was very much upset and dejected.

On her way to class

At the music class

Miss Meadows started her music class in a gloomy and depressed mood. She taxed the students by making them sing a sad song, ‘A Lament’. The words were “Fast fade the roses of pleasure”, “Music’s gay measure passes away.” The girls, sense the change in her behaviour and in her stony tone voice. They sang the song in a sorrowful mood.

Suddenly she was called by Miss. Wyatt, the headmistress. She gave Miss Meadows a telegram from Basil. In the telegram Basil stated- “Forget the letter, I was in a mad mood”. It meant that he would marry her. This gave her greatest happiness. Miss Meadows felt happy and returned to the class with vigour and cheer and she announced a song of happiness.

With Baskets of Fruit and Ribbons to boot, To-oo Congratulate...

Thus there were two different moods of Miss Meadows and the changes in her mood affected everyone in the music class. The story brings out the two moods clearly and effectively.

A. Based on your understanding of the story, answer the following questions in about 30 – 50 words each.

Baton was the knife carried by Miss.Meadows. Baton is a. thin, light stick used by the conductor of an orchestra. Here the Baton is referred to as the knife, a symbol of her mood.

2.        What kind of relationship existed between Miss Meadows and the Science Mistress?

The fiance of Miss Meadows had sent a letter to her stating that the marriage between himself and Meadows would be a mistake. So Miss Meadows was upset and dejected.

4.        How would Miss Meadows usually treat Mary? How did her behaviour towards the girl change that day?

Usually Mary would hand over to Miss Meadows a beautiful yellow Chrysanthemum. Miss. Meadows would take it and tuck it into her belt. But that morning, Miss Meadows did not take it, and simply said “Thank you, Mary” Then she announced, “Turn to page-32”

Basil, the fiance of Miss Meadows had sent a letter breaking his marriage. So, Miss Meadows was heart-broken and therefore she selected “A Lament”

6.        What brought agony to the girls during the music lessons?

Miss. Meadows Chose “A Lament” for singing. It was a sad song. Every note was a sigh, a sob, a groan of great sorrow. The words were “Fast fade the roses of pleasure”, “Music’s gay measure passes away.” Therefore the song brought agony to the girls.

Basil wrote to Miss, Meadows. “I feel more and more strongly that our marriage would be a mistake” Then he wrote “I am not a marrying man”

9.        How did Miss Meadows express her joy, when she returned to the music class?

Miss Meadows expressed her joy by choosing a happy song. “We come here today with flowers overladen” to congratulate.

10.   Briefly explain the cause of Miss Meadows' joy at the end.

Miss Meadows received a telegram from Basil, her fiance. The telegram said, “Pay no attention to letter, ... must have been mad”. It meant that he would marry her. That was the cause of Miss Meadow’s joy.

Note the following words from the story. They all refer to different ways of walking. Find out their meanings and use each of them in meaningful sentences of your own. Refer a thesaurus and add a few more to the list.

Few people had trod this way before. He was treading quietly.

b. fluttered - flutter - to more lightly this way and that.

The leaves of the tree fluttered in the breeze.

When the bell rang, the students hurried to the classrooms.

The children skipped over the pebbles, while walking on the road.

The giraffe strode across the grassland.

The bullet train sped past many small stations.

B. Complete the mind map given below and write a brief summary of the story in your own words. 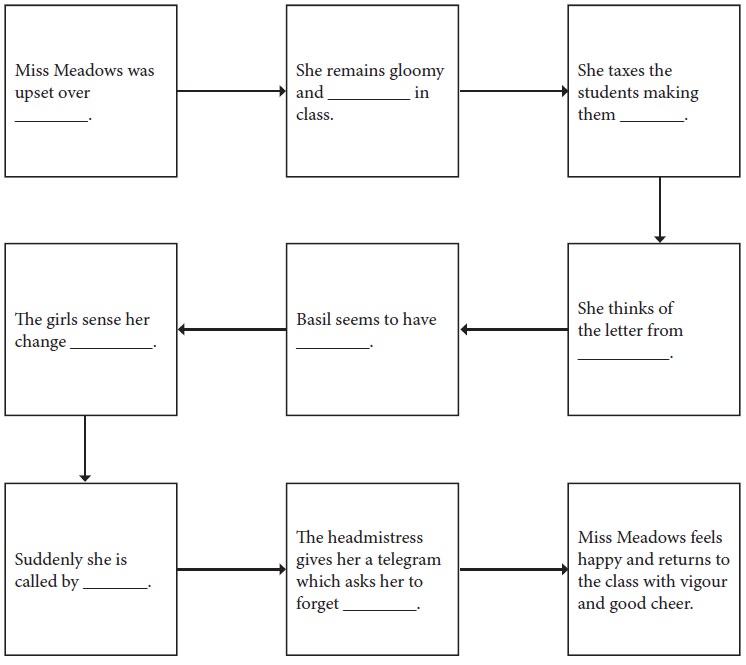 5.         Basil seems to have cancelled his marriage proposal with Miss Meadows.

8.         The headmistress gives her a telegram which asks her to forget about the contents of the letter

9.         Miss Meadows feels happy and returns to the class with vigour and cheer.

C. Answer the following questions in a paragraph of about 150 words each.

1. Describe Miss Meadows’ mood before and after receiving the telegram. How did it affect her class?

Miss Meadows started the music class in the morning. She was in a sad mood. Because the fiance of Miss Meadows, Basil had sent a letter to her stating that the marriage between himself and Meadows would be a mistake.Therefore she announced the song “A Lament”. It was a sad song. Every note was a sigh, a sob, a groan of great sorrow. The words were “Fast fade the roses of pleasure”, “Music’s gay measure passes away.” Therefore the song brought agony to the girls. They sang the song in a sorrowful mood. Later the HM of the school called Miss Meadows and gave her a telegram from Basil. In the telegram Basil - “Forget the letter, I was in a mad mood” This gave her greatest happiness. So when she returned, to the music class she announced a song of happiness.

We come here with flowers.

Baskets of fruit and ribbons to congratulations.

Thus there were two different moods of Miss Meadows.

2. 'The only difference between a good day and a bad day is your attitude.' Relate this to a real life experience you have had. Share your thoughts in class.

My birthday celebration was to be on the 13th March. My parents were busy inviting friends and relatives. On 12"’ morning my mother said, “Rahul, your uncle is not joining us tomorrow, he is very busy with office work”. I was very much upset and depressed, because usually my uncle gives me some costly, useful gift on every Birthday. The whole day I was in a sad mood. My father and mother advised me to cheer up, but it was to no use. 13lh morning, I was receiving my friends at the doorway. What a surprise! My uncle got off an auto! I ran to him and embraced him. I was most happy. Later he presented me a wrist watch.

3. You are busy getting ready for school. You receive a Whats App message from your best friend, saying that he/she is very upset over the fight you had yesterday and doesn’t want to talk to you anymore. This distresses you as she sounds very firm. However, today is a big day at school with two tests lined up. What will be your state of mind? How will you handle this situation?

I am getting ready to go to school at 8 in the morning. Just then I receive a message from friend about the quarrel we had with each other yesterday. He says he will not talk to me. I am a little upset. But I console myself. We have two tests in two subjects today - English and Maths. Let me concentrate on the tests. After the tests are over I will meet my friend and apologize to him for my harsh words of abuse. I am sure he will forget our quarrel. We will be friends again. The quarrel is a simple, passing affair. Our friendship is strong and steady.