Properties of the Prions - Slow Diseases Caused by Prions

Properties of the Prions

Prions are small protein-containing infectious particles with no detectable nucleic acid. They were suspected to be viruses but otherwise do not conform to the standard definition of viruses. They differ from the viruses in their many properties (Table 69-2). The prions show following characteristics:

b)       They apparently lack any virion structure or genome.

c)        Unlike viruses, they are unusually resistant to inactivation by heat, disinfectants, and radiation.

d)       They do not elicit any specific immune response in the infected host. 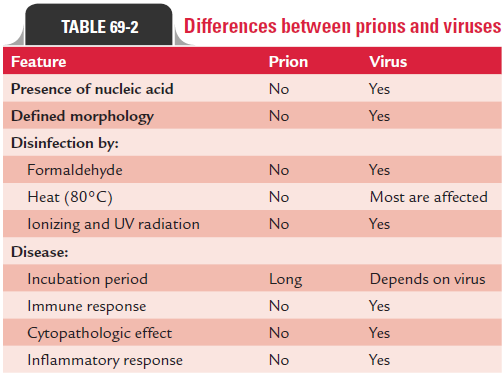 Different hypotheses have been suggested for the makeup of prions. Initially many research workers considered prions to be (a) nucleic acid only, (b) protein only, (c) lacking both protein and nucleic acid, and (d) polysaccharide. Currently, the most widely accepted hypothesis is the “protein only hypothesis” first suggested by Griffith (1965) and re-established subsequently by Prusiner to indicate that scrapie is related to a proteinaceous infectious particle (PrP). Prions show following features:

·           It contains an aggregate of hydrophobic glycoprotein, resistant to protease.

In experimental animal studies carried out in chimpanzees, Prusiner demonstrated conclusively that the prion, an aberrant protein, could cause disease, for which he was awarded Nobel Prize in 1997.

These abnormal proteins are resistant not only to protease degradation but also to radiation, heat, and other agents that destroy proteins. These aggregate into filaments that disrupt neuron functions and cause death of cells. Both the normal alpha-helical form and the abnormal beta-pleated sheet form have the same amino acid sequence but differ in their configuration.

Prions, unlike viruses, are unusually resistant to heat at 80°C, ultraviolet radiation, and disinfectants, such as formaldehyde. They are, however, inactivated by phenol, ether, sodium hydroxide, and hypochlorite.

Prions cannot be cultivated in any tissue culture or isolated in any experimental animal models.