There are many types of programmable logic device, distinguishable from one another in terms of architecture, logic capacity, programmability and certain other specific features. In this section, we will briefly discuss commonly used PLDs and their salient features. A detailed description of each of them will follow in subsequent sections.

PROM (Programmable Read Only Memory) and EPROM (Erasable Programmable Read Only Memory) can be considered to be predecessors to PLDs. The architecture of a programmable ROM allows the user to hardware-implement an arbitrary combinational function of a given number of inputs. When used as a memory device, n inputs of the ROM (called address lines in this case) and m outputs (called data lines) can be used to store 2n m-bit words.

The AND array produces all possible minterms of a given number of input variables, and the programmable OR array allows only the desired minterms to appear at their inputs. Figure shows the internal architecture of a PROM having four input lines, a hard-wired array of 16 AND gates and a programmable array of four OR gates.

A cross (×) indicates an intact (or unprogrammed) fusible link or interconnection, and a dot (•) indicates a hard-wired interconnection. PROMs, EPROMs and EEPROMs (Electrically Erasable Programmable Read Only Memory) can be programmed using standard PROM programmers. One of the major disadvantages of PROMs is their inefficient use of logic capacity. It is not economical to use PROMs for all those applications where only a few minterms are needed.

Other disadvantages include relatively higher power consumption and an inability to provide safe covers for asynchronous logic transitions. They are usually much slower than the dedicated logic circuits. Also, they cannot be used to implement sequential logic owing to the absence of flip-flops. 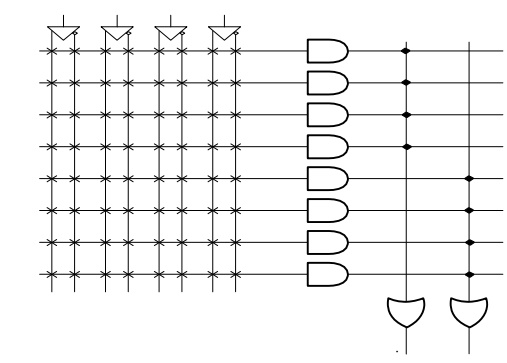 GAL device can be erased and reprogrammed. Also, it has reprogrammable output logic. This feature makes it particularly attractive at the device prototyping stage, as any bugs in the logic can be corrected by reprogramming. A similar device called PEEL (Programmable Electrically Erasable Logic) was introduced by the International CMOS Technology (ICT) Corporation.

While the complexity of a typical PAL device may be of the order of a few hundred logic gates, a CPLD may have a complexity equivalent to tens of thousands of logic gates. When compared with FPGAs, CPLDs offer predictable timing characteristics owing to their less flexible internal architecture and are thus ideal for critical control applications and other applications where a high performance level is required. Also, because of their relatively much lower power consumption and lower cost, CPLDs are an ideal solution for battery-operated portable applications such as mobile phones, digital assistants and so on.

A CPLD can be programmed either by using a PAL programmer or by feeding it with a serial data stream from a PC after soldering it on the PC board. A circuit on the CPLD decodes the data stream and configures it to perform the intended logic function.

FPGAs offer a much higher logic density and much larger performance features compared with CPLDs. Some of the contemporary FPGA devices offer a logic complexity equivalent to that of eight million system gates. Also, these devices offer features such as built-in hard-wired processors, 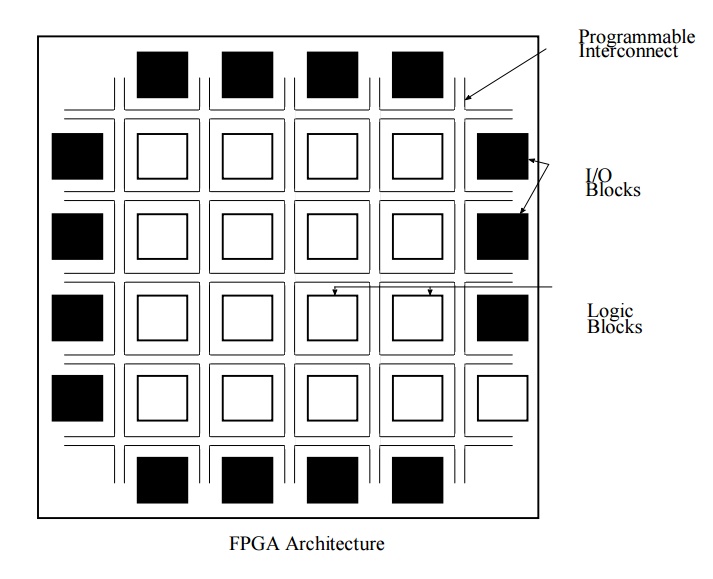 large memory, clock management systems and support for many of the contemporary device-to- device signalling technologies. FPGAs find extensive use in a variety of applications, which include data processing and storage, digital signal processing, instrumentation and telecommunications