A programmable logic device offers to the user a wide range of logic capacity in terms of digital building blocks, which can be configured by the user to perform the intended function or set of functions. This configuration can be modified or altered any number of times by the user by reprogramming the device. Figure shows a simple logic circuit comprising four three-input AND gates and a four-input OR gate. This circuit produces an output that is the sum output of a full adder. Here, A and B are the two bits to be added, and C is the carry-in bit. It is a fixed logic device as the circuit is unalterable from outside owing to fixed interconnections between the various building blocks. Figure shows the logic diagram of a simple programmable device.

The device has an array of four six-input AND gates at the input and a four- input OR gate at the output. Each AND gate can handle three variables and thus can produce a product term of three variables.

The three variables (A, B and C in this case) or their complements can be programmed to appear at the inputs of any of the four AND gates through fusible links called antifuses. This means that each AND gate can produce the desired three- variable product term. It may be mentioned here that an antifuse performs a function that is opposite to that performed by a conventional electrical fuse.

A fuse has a low initial resistance and permanently breaks an electrically conducting path when current through it exceeds a certain limiting value. In the case of an antifuse, the initial resistance is very high and it is designed to create a low- resistance electrically conducting path when voltage across it exceeds a certain level. As a result, this circuit can be programmed to generate any three- variable sum-of-products Boolean function having four minterms by activating the desired fusible links. For example, the circuit could be programmed to produce the sum output resulting from the addition of three bits (the sum output in the case of a full adder) or to produce difference outputs resulting from subtraction of two bits with a borrow-in (the difference output in the case of a full subtractor). 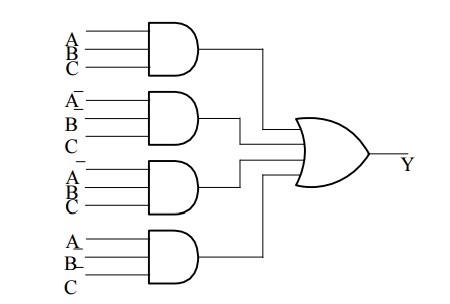 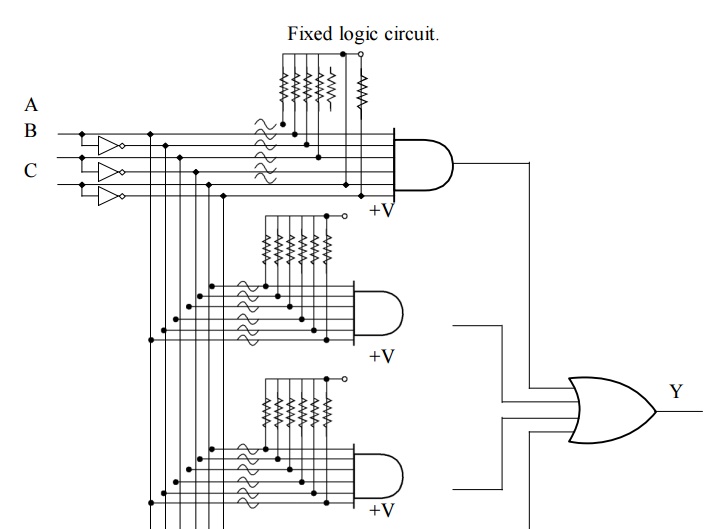 1.           If we want to build a fixed logic device to perform a certain specific function, the time required from design to the final stage when the manufactured device is actually available for use could easily be several months to a year or so. PLD-based design requires much less time from design cycle to production run.

2.           In the case of fixed logic devices, the process of design validation followed by incorporation of changes, if any, involves substantial nonrecurring engineering (NRE) costs, which leads to an enhanced cost of the initial prototype device. In the case of PLDs, inexpensive software tools can be used for quick validation of designs. The programmable feature of these devices allows quick incorporation of changes and also a quick testing of the device in an actual application environment.

In this case, the device used for prototyping is the same as the one that would qualify for use in the end equipment.

3. In the case of programmable logic devices, users can change the circuit as often as they want to until the design operates to their satisfaction. PLDs offer to the users much more flexibility during the design cycle. Design iterations are nothing but changes to the programming file.

4. Fixed logic devices have an edge for large-volume applications as they can be mass produced more economically. They are also the preferred choice in applications requiring the highest performance level.