Chapter: Aquaculture Principles and Practices: History of Aquaculture and its Present State

To evaluate the present state of aquaculture it is essential to assess the state of capture fisheries and the current consumption needs of increasing world populations.

To evaluate the present state of aquaculture it is essential to assess the state of capture fisheries and the current consumption needs of increasing world populations. Traditionally small-scale fish farming was practised to produce food for rural communities, particularly the poorer sections of society. Analysis of capture fisheries statistics shows that only part of the production was available for human consumption, the rest being used for industrial purposes, including the processing of animal feed. For example, of the 94.8 million tons produced by capture fisheries in the year 2000, only 70 million tons can be expected to become available for human consumption at the current rate of utilization. Even if this amount can be increased by improving utilization by value-added products, the maximum total catch used for human consumption can be expected to be only about 80 million tons of the edible fishery products required towards meeting the demands of the projected world population at the present consumption rate, which thus would need maintenance of the capture fishery production at an improved level and enlargement of aquaculture operations.

Available fishery statistics for the year 2000 seem to justify some of the optimistic estimates made earlier. The capture fisheries landing amounts to 94848000 tons and aquaculture harvests are estimated to be 35585000 tons, which together yield 130333000 tons of edible fisheries products. Even though capture fisheries show greater seasonal fluctuations, aquaculture harvests made through human endeavour seem to stabilise at an average rate of increase of at least 10% per year. Aquaculture production of fish, crustaceans and molluscs amounts to about 35585000 tons, valued at US $50859000 in the year 2000. Aquatic plant production, mainly in the Asian region, amounts to 10130448 tons, valued at US $5607835. Asia, which is the major continent that produces aquatic plants (mainly seaweeds) through aquaculture, produced 10073581 tons.Available figures seem to more than justify the estimated total of aquaculture production of over 26 million tons by the turn of the last century (Pillay, 1996). The overall production of all aquatic organisms is reported to amount to 45715550 tons valued at US $56466782 in 2000. Global production for future supplies is estimated to be 47 million tons for the year 2010 (Pedini and Shehadeh, 1997).

Analysis of the composition of production figures for the year 2000 shows that major increases are due to finfish and crustacean culture, in response to widespread consumer demand. Seaweed culture is mainly to meet the demand for it in many parts of Asia as food and, to some extent, to provide raw materials for pharmaceutical industries.

Depending on local conditions extensive, semi-intensive or intensive systems of production are employed. Environmental sustainability would often require the adoption of semi-intensive culture systems, while commercial production would often adopt intensive systems when available space has to be fully utilized for production purposes. Greater human control of environmental conditions has to be employed in such systems in order to prevent undue loss due to disease outbreaks and to make the operation sustainable on a long-term basis.

Aquaculture production increased from 7.4 millions tons in 1980 and 16.8 millions tons in 1990 to more than 42 million tons in 1999 (valued at over US $53 billion). The sector production is growing by more than 10% per year, as compared with a growth of about 3% for terrestrial livestock meat production and 1.5% for capture fisheries production. The contribution of aquaculture to world fish landings has more than doubled since 1984. In 1997, over 30% of food fish consumed by humans, from a total average per capita fish supply of 16.1kg, was provided by aquaculture. Global projections of future supplies from aquaculture include, for example, 47 million tons for the year 2010. (Realised production for 2000 is already 45 million tons, as indicated above.)

If the hoped-for 100 million tons catch is obtained (FAO, 2001, estimates 1999 production as 94 million tons), about 70 million tons can be expected to become available for human food at the current rate of utilization. Even if this can be increased, the maximum total catch used for human consumption cannot be expected to surpass 80 million tons. On the other hand, it is estimated that about 100 to 140 million tons of edible fishery products will be required to meet the demand of the projected world population by the year 2000.There is thus a deficit of approximately 20 to 60 million tons to be made up, and the only major means presently known for this is an accelerated development of aquaculture.

Aquaculture has historically been a small-scale activity. Some spectacular successes have been achieved in large-scale commercial farming, and aquaculture production has more than trebled, from about 15% of capture fisheries production to almost 50% in 1999. In certain areas and sectors the volume of production and economic significance are much greater. Several culture technologies have been developed but most are far from perfect, and research efforts to improve and develop sustainable technologies have to be intensified. It has also been demonstrated that aquaculture programmes have a relatively long gestation period in comparison with fishing or other forms of food production. Even when tested technologies are adopted, the construction of physical facilities (particularly pond farms), solution of site-specific problems, the building up of the productivity of the system and, above all, attainment of skills by workers take considerable time. Lack of allowance for such time-lags has often resulted in the premature termination of many enterprises.

As it is a new and emerging industry, mistakes have been made in certain commercially more profitable aquaculture ventures such as shrimp farming, and possibly also in marine cage culture, for conceptual, technological or managerial reasons. There was also the unpreparedness of aquaculture health management for facing the onslaught of diseases, such as the white spot virus syndrome in shrimp, which struck the weakened animals and caused devastations mostly in the wake of a degraded environment and contiguous natural water bodies.

It is difficult to determine the accuracy of the estimates, as different types of computations have been used in certain countries, such as total production based on average yield per unit area, conversion of processed products to wet weight of harvests, isolation of harvests of cultivated species from total landings in large water bodies containing resident species, etc. It is also likely that the productions from many small-scale farming operations have been over-looked, as government institutions may have had no records of them and their harvests may not reach major markets. The possibility of some of the increases in estimates being due to better coverage also cannot be ruled out. Nev-ertheless, the available figures clearly show the main trends in production and demonstrate convincingly that aquaculture is strikingly the fastest growing industry in the food sector, as some of the optimistic forecasts indicate. The 1999 annual world production of 42.8 million tons (Table 2.1) has surpassed by a great leap the earlier projection of 26 million tons by the turn of the century. As already pointed out, the crisis lately developed owing to the unbridled development of certain lucrative production systems and environmental and social conflicts has come to the fore. This points out the need for the development of environmentally responsible and socially acceptable methodologies for sustainable systems.

The regional distribution and composition of world aquaculture production for 1983, 1987, 1990 and 1999 are given in Tables 2.1 and 2.2 respectively.Asia is the largest aquaculture producer, followed by Europe.The rates of increase in production in North America and in Africa are remarkably higher, although their overall contributions still remain rather small.Available 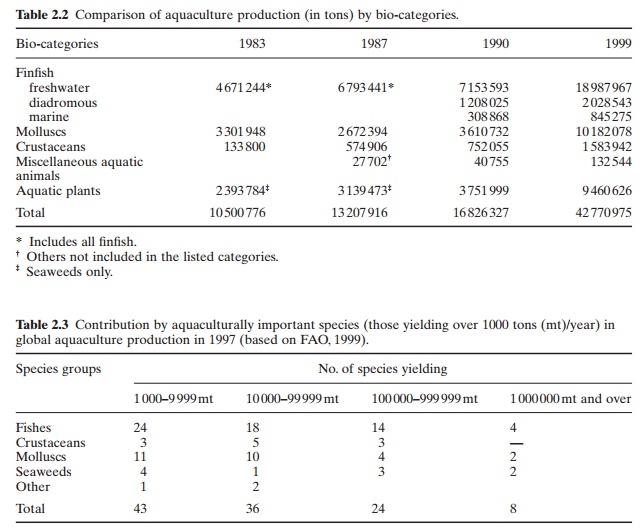 data for South America and Oceania suggest production increases by the end of the century, although data prior to 1990 are not available for Oceania. Composition of production figures shows that major increases are due to expansion of finfish and crustacean culture, for which there is more widespread consumer demand. The increase in crustacean production is slower in the last decade, probably owing to the negative impacts of shrimp farming (referred to above) which caused a slump in shrimp production in the mid-nineties.Hopefully,with the adoption of improved management practices and methods for the resolution of environmental and social conflicts – the need for which is increasingly recognised by all the stakeholders in aquaculture – sustainable aquaculture will prevail.

Even though there are over 300 species, which are being cultivated at different levels of intensity, the present aquaculture production is dominated by just a few species (Table 2.3). According to FAO production statistics for 1997, only eight species account for the production of over a million tons each.