Chapter: Aquaculture Principles and Practices: History of Aquaculture and its Present State

Origins and growth of aquaculture

Most publications on aquaculture refer to the long history of fish culture in Asia, ancient Egypt and central Europe.

History of Aquaculture and its Present State

Despite the clear rationale for the adoption of farming as a natural evolution from hunting and gathering, the technological advances needed to achieve such a complete transformation of fishing to farming are enormous. Even though the contribution of culture to total fishery production has increased steadily, and in certain cases has exceeded production from hunting, it is unlikely to reach the levels of human control comparable with crop and animal farming on the land in the foreseeable future. However, what can be expected is an integrated or harmonized development of the two sectors, as in the enhancement and management of forest resources.

Origins and growth of aquaculture

Most publications on aquaculture refer to the long history of fish culture in Asia, ancient Egypt and central Europe. The Classic of FishCulture, believed to have been written around500 BC by Fan Lei, a Chinese politician-turned-fish-culturist, is considered proof that commercial fish culture existed in China in his time, as he cited his fish ponds as the source of his wealth (Ling, 1977)! Later writings of Chow Mit of the Sung Dynasty (Kwei Sin Chak Shik in 1243 AD) and of Heu (A Complete Book ofAgriculture in 1639 AD) describe in some detailthe collection of carp fry from rivers and, in the latter publication, methods of rearing them in ponds. Even though stews or storage ponds for eels and other fish existed in Roman times and later in monastic houses in the Middle Ages, and a 2500 BC bas-relief of fish in Egypt is believed to be of tilapia raised in a pond, the earliest form of fish culture appears to be of the common carp (Cyprinus carpio), a native of China. It was introduced into several countries of Asia and the Far East by Chinese immigrants, and to Europe during the Middle Ages for culture in monastic ponds. From there it spread to many countries. From the 6th century AD the common carp lost its preeminence in China. This is said to have been due to the identity with the name of the Tang Dynasty Emperor ‘Lee’, which is also the name of the common carp in Chinese (Ling, 1977). Since the name of Emperor Lee was considered sacred, it was inconceivable that lee could be cultured and caught for eating. So they looked for other species of carp and that is how the culture of the so-called Chinese carps (grass, silver, bighead and mud carp) came into being. Irrespective of whether it is fact or fiction, this and probably also the practical problems of sepa-rating larvae of different species of carp caught from rivers gave rise to the celebrated system of polyculture. Until very recent times, carp culture in ponds remained the mainstay of aquaculture in China, but for the introduction of tilapia (Tilapia mossambica) from Vietnam and the development of simple methods of oyster cultivation in certain foreshore areas of the coast. However, a number of other fish have been added to the species combinations, with the expectation of increasing productivity in polyculture ponds. 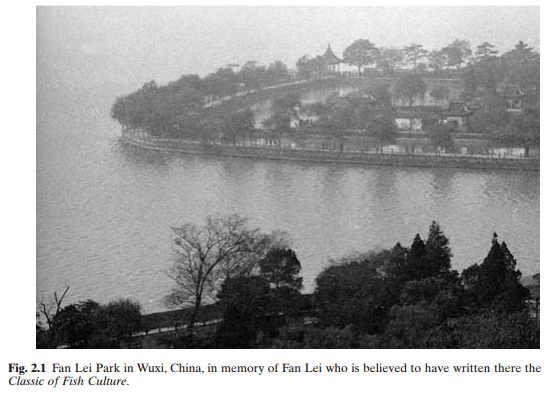 While the Chinese immigrants were the focal points for most of the developments of fish farming in Southeast Asia, indigenous systems of Indian carp culture seem to have existed in eastern parts of the Indian subcontinent in the 11th century AD. Fish culture was practised in Indo-China for many centuries and the early systems of pen and cage culture of catfish appear to have indeed originated in Cambodia, present-day Kampuchea. Probably starting as a means of holding fish alive before marketing, flow-through culture from fry to market size with artificial feeding developed in the course of time. Variations of this system came to be practised in Indonesia for carps and in Thailand for the catfish Pangasius.

The earliest brackish-water farming in Southeast Asia appears to have originated in Indonesia in the island of Java during the 15th century AD. It is believed that the culture of the milkfish (Chanos chanos) and other brackish-water species in embanked coastal areas (tambaks) originated under the influence of the Hindu rule, and by the 18th century there were over 80000 acres (32389ha) of ponds. The early tambaks are reported to have been constructed by convicts who were sent to the coastal areas to work on salt marshes and to guard the coastal fires.

As mentioned earlier, the history of aquaculture in Europe starts from the Middle Ages with the introduction of common carp culture in monastic ponds. Common carp attained a social and religious significance as the chosen food to be eaten on special occasions, for example Christmas, in certain areas. However, there was also a certain amount of prejudice against it in some Western countries, particularly because of the lack of acceptance of its culinary properties, and it was considered a pest because its feeding habits gave rise to soil erosion and muddying of water, particularly water used for game fishing. Despite this, carp culture continued and flourished in almost all East European countries and from there it was introduced into present-day Israel. In recent times, the polyculture of Chinese carp has also been adopted in many of these countries.

The propagation of trout, which has a fairly long history, originated in France and the monk Don Pinchot, who lived in the 14th century, is credited with the discovery of the method of artificial impregnation of trout eggs (Davis, 1956). Being a sport fish and more widely accepted for its culinary properties, trout culture spread to almost all continents in the course of time. Even though early efforts were focused on repopulating natural water bodies for improving sport fishing, pond culture and other forms of intensive culture gradually developed to produce fish for the market. Commercial trout culture in fresh water on a fairly large scale developed in countries such as France, Denmark and Japan, and later in Italy and Norway. During this period, the culture of the Atlantic salmon also became a commercial success and with the development of cage farming of salmon and trout in Norwegian fjords, salmonid culture achieved a remarkable boost in production and public attention.

The British introduced trout in their colonies in Asia and Africa, mainly to develop sport fisheries. The early development of fish culture in North America was centred on the propagation of salmon and trout, and to a lesser extent on the black bass. Starting in the 18th century, trout hatcheries were established in government stations mainly for release of fry into open waters, but in the course of time the private sector started commercial production of consumption fish. Slowly the practice of trout propagation for release in open waters or, more recently, for farming spread to the temperate and semi-temperate areas of Central and South America.

When tracing the history of fish culture, one has to take into account the rather ancient practice of breeding and rearing ornamental fish, such as goldfish and Koi carp, by the Japanese and Chinese. The spread of tilapia, a native of the African continent, to several countries in all parts of the world is a remarkable phenomenon. Even though there was resistance to its introduction in many countries and it was considered a pest by some, its culture spread far and wide, especially in developing tropical countries. Tilapia culture was considered by many an easy means of producing cheap proteins for the masses. Research and experimentation have in recent years found solutions to some of the problems of culturing tilapia, and commercial-level farming has developed in certain areas.

The oldest form of coastal aquaculture is probably oyster farming, and the Romans, Greeks and Japanese are believed to have been the earliest oyster farmers. Oyster culture in intertidal stretches is said to have been practised in Japan around 2000 years ago. Aristotle mentions the cultivation of oysters in Greece and Pliny gives details of Roman oyster farming in 100 BC. The culture of other molluscs like mussels and clams, which follow methods similar to oyster farming, appears to have developed much later.

From a historical point of view, the only other culture system that needs mentioning is the large-scale farming of seaweeds, which is of relatively recent origin. The earliest text book on seaweed culture appears to have been published in Japan in 1952. After the Second World War, culture of edible seaweeds expanded and intensified considerably and spread to other countries such as Korea, Taiwan and mainland China.