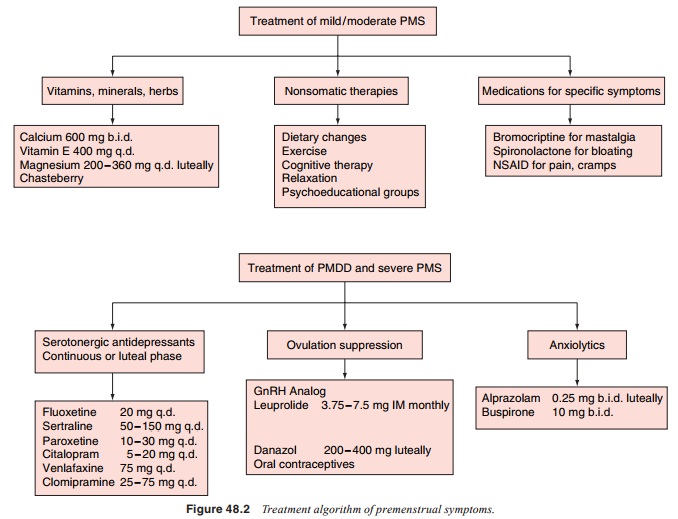 A large RCT has reported that fluoxetine 20 mg/day dur-ing the luteal phase only was superior to placebo in reducing premenstrual emotional and physical symptoms in 252 women with PMDD.

The treatment studies of SSRIs and venlafaxine in PMDD have suggested a similar efficacy rate to treatment studies of SSRIs in major depressive disorder, with 60 to 70% of women respond-ing to SSRIs compared with approximately 30% of women re-sponding to placebo. In general, the effective doses for all SSRIs are similar to the doses recommended for the treatment of major depressive disorder (Figure 48.2) The efficacy of the continuous versus intermittent dosing is equivalent. 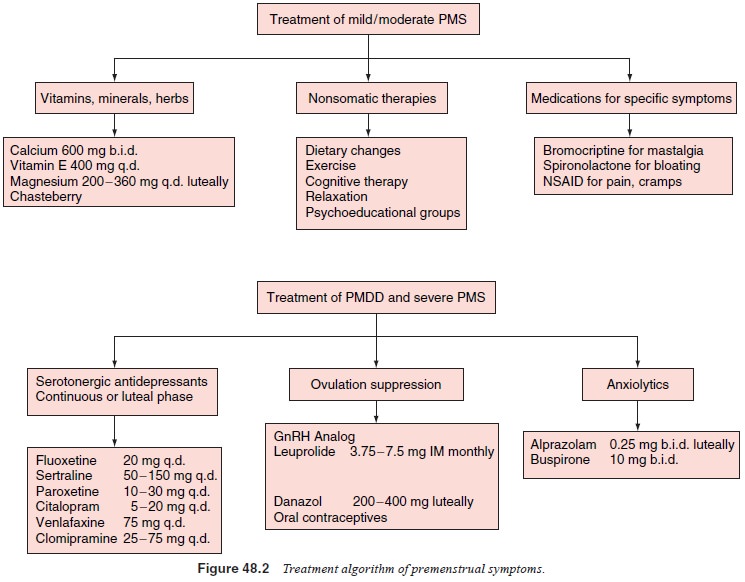 A large RCT has reported that fluoxetine 20 mg/day dur-ing the luteal phase only was superior to placebo in reducing premenstrual emotional and physical symptoms in 252 women with PMDD (Cohen et al., 2002). There have not been reports of discontinuation symptoms from these doses of SSRIs when abruptly stopped from the first day of menses. There are no pub-lished studies to date of the efficacy of “symptom onset” dosing of SSRIs, that is, administering SSRIs the postovulatory day that premenstrual symptoms appear until menses. The efficacy of intermittent dosing, as well as the findings from most SSRI tri-als that efficacy is achieved by the first treatment cycle, has sug-gested a more rapid and different mechanism of action of SSRIs in PMDD compared with its effect in major depressive disorder, which typically takes 2 to 6 weeks. As discussed above, it has been hypothesized that the rapid improvement of premenstrual symptoms by SSRIs may be due to an increase in allopregna-nolone levels. The selective superiority of serotonergic antide-pressants for PMDD is compatible with the postulated serotonin dysfunction in PMDD.

Most SSRI trials have been 6 months or less in duration, so efficacy-based long-term treatment recommendations do not ex-ist. Clinically, many women note the recurrence of premenstrual symptoms after SSRI discontinuation and many clinicians treat women over a long period of time. As reviewed, a few open stud-ies report maintenance of SSRI efficacy over a couple of years (Yonkers, 1997). Studies are needed to identify whether or not some women develop tolerance to the SSRI and need a higher dose over time and whether or not some women stay in remission for a period of time following SSRI discontinuation.

Gonadotropin releasing hormone (GnRH) agonists suppress ovulation by downregulating GnRH receptors in the hypothalamus, leading to decreased follicle-stimulating hormone and luteinizing hormone release from the pituitary, resulting in decreased estrogen and progesterone levels. GnRH agonists are administered parenterally (e.g., subcutaneous monthly injections of goserelin, intramuscular monthly injections of leuprolide, daily intranasal buserelin) (see Figure 48.2). GnRH agonists lead to improvement in most emotional and physical premenstrual symptoms, with possible decreased efficacy for premenstrual dysphoria and severe premenstrual symptoms or for the exacerbation of chronic depression. After relief of PMS is achieved with a GnRH agonist, “add-back” hormone strategies have been investigated due to the undesirable medical consequences of the hypoestrogenic state resulting from prolonged anovulation. The addition of estrogen and progesterone to goserelin and leuprolide led to the reappearance of mood and anxiety symptoms. Since women with severe PMS and PMDD have an abnormal response to normal hormonal fluctuations, it is not surprising that women had the induction of mood and anxiety symptoms from the addition of gonadal steroids, reducing the benefit of the replacement strategy

Even though oral contraceptives (OCs) are a commonly pre-scribed treatment for PMS, there is minimal literature endorsing its efficacy. Anecdotally, women report that oral contraceptives may benefit, worsen, or not affect their premenstrual symptoms. The induction of dysphoria may be related to the type and dose of the progestin component, the androgenic properties of the pro-gesterone, or to the estrogen/progestin ratio (Kahn and Halbreich, 2001). A more recent RCT compared an oral contraceptive to pla-cebo in 82 women with PMDD (Freeman et al., 2001). Even though the OC containing ethinyl estradiol 30 µg and drospirenone 3 mg improved most premenstrual symptoms, due in large part to a placebo response rate of 40%, the OC was significantly more effi-cacious than placebo only in decreasing food cravings, increased appetite and acne. Oral contraceptives have been reported not to alter the response to SSRIs in women with PMDD.

The early assumption that PMS was due to a progesterone deficiency, which has never been substantiated, led to luteal phase progesterone being one of the earliest treatments of PMS in the literature. A recent systematic review of published double-blind placebo-controlled randomized studies of luteal phase progesterone (given as vaginal suppositories or oral micronized tablets) and progestogens reported that there was no clinically meaningful difference between all progesterone forms and placebo, although there was a small statistically significant superiority of progesterone over placebo (Wyatt et al., 2001).

Alprazolam (administered during the luteal phase) has been re-ported to be superior to placebo in most studies, and although it has a lower efficacy rate than SSRIs, it is effective for premen-strual emotional symptoms. Alprazolam should be tapered over the first few days of menses each cycle. Buspirone at 25 mg/day during the luteal weeks has some efficacy. Spironolactone has been reported to decrease premenstrual emotional and physical symptoms. Bromocriptine has been reported to decrease premen-strual breast.

Many lifestyle modifications and psychosocial treatments have been suggested for PMS. Lifestyle modifications are often sug-gested through self-help materials or in an individual or group psychoeducation format. A recent study reported that a weekly peer support and professional guidance group for four sessions was superior to waitlist control in terms of reducing premen-strual symptoms. The treatment consisted of diet and exercise regimens, self-monitoring and other cognitive techniques and environment modification (Taylor, 1999). Studies have not been conducted on individual lifestyle or psychosocial treatments to identify which components are most efficacious.

Dietary recommendations include decreased caffeine, fre-quent snacks or meals, reduction of refined sugar and artificial sweeteners, and increase in complex carbohydrates. Premen-strual increased appetite and carbohydrate craving increases the availability of tryptophan in the brain, leading to increased serot-onin synthesis. There is little data at this time supporting dietary interventions.

Exercise is likewise a frequently recommended treatment for PMS that has yet to be tested in a sample of women with prospectively-confirmed PMS or PMDD. As reviewed, negative effect and other premenstrual symptoms improve with regular exercise in women in general. Cognitive therapy (CT) is reported to be a promising treatment for PMS. There are limited studies in the use of light therapy, massage therapy, reflexology, chiropractic manipulation, acupuncture and biofeedback.