Premenstrual syndrome (PMS) is a combination of emotional, be-havioral and physical symptoms that occur in the premenstrual or luteal phase of the menstrual cycle.

The diagnostic criteria for PMDD are listed in the ap-pendix of DSM-IV (American Psychiatric Association, 1994). A clinician can indicate that a woman has symptoms that meet the diagnostic criteria for PMDD by using the DSM-IV diagno-sis 311, depressive disorder not otherwise specified. To meet the PMDD criteria, at least five out of 11 possible symptoms must be present in the premenstrual phase; these symptoms should be absent shortly following the onset of menses; and at least one of the five symptoms must be depressed mood, anxiety, lability, or irritability. The PMDD criteria require that role functioning be impaired as a result of the premenstrual symptoms. The func-tional impairment reported by women with PMDD is similar in severity to the impairment reported in major depressive disorder and dysthymic disorder (Pearlstein et al., 2000). Unlike the func-tional impairment reported in depressive disorders, women with severe PMS and PMDD report more disruption in their relation-ships and parenting roles than in their work roles.

The PMDD criteria require that a woman prospectively rate her emotional, behavioral and physical symptoms over two men-strual cycles to confirm the diagnosis. Charting two menstrual cycles is advantageous, since some women have variability of symptom severity from cycle to cycle due to factors such as sea-sonal worsening, or a woman might have the unusual presence of follicular phase psychological symptoms due to a transient stres-sor. Recent studies tend to utilize visual analog scales, or Likert scale daily rating forms such as the Daily Record of Severity of Problems (Endicott and Harrison, 1990), with a scoring method that compares the average of symptom scores during the premen-strual days to the average of symptom scores postmenses.

A woman presenting with PMS should ideally bring to her clinician two cycles of an established daily rating form, oralternatively ratings of her most problematic symptoms, rated with anchor points ranging from “not present” to “severe”. The clinician should review the daily ratings to confirm that the symptoms are in fact confined largely to the premenstrual phase, with the relative absence of symptoms in the follicular phase, and the clinician should also assess premenstrual functional impairment (Figure 48.1). Ratings that demonstrate follicular symptoms with increased symptom severity in the premenstrual phase suggest “premenstrual exacerbation” of an underlying disorder rather than PMDD. The DSM-IV-TR PMDD criteria state 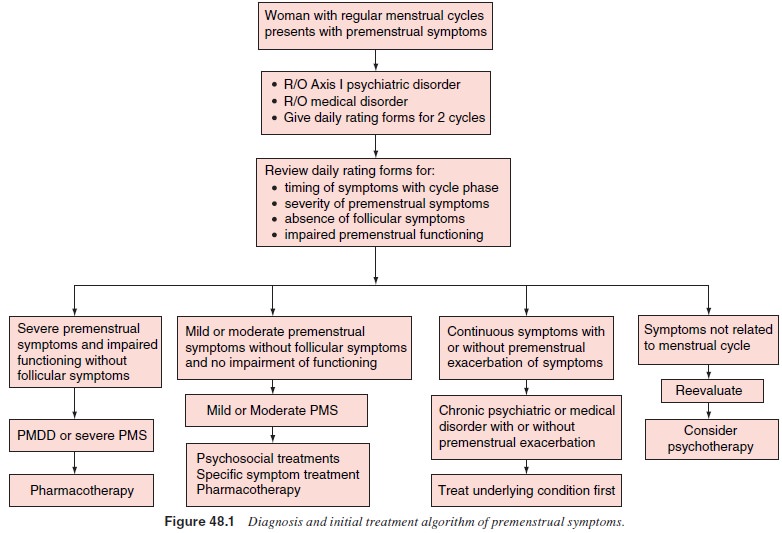 that the premenstrual symptoms should not be an exacerbation of an underlying disorder, but that PMDD could be superimposed on another disorder, like panic disorder. No formal guidelines exist for how to apply this criterion clinically.