The term Polymer is derived from the Greek word ‘polumeres’ meaning “having many parts”. The constitution of a polymer is described in terms of its structural units called monomers. Polymers consists of large number of monomer units derived from simple molecules. For example: PVC(Poly Vinyl Chloride). is a polymer which is obtained from the monomer vinyl chloride. Polymers can be classified based on the source of availability, structure, molecular forces and the mode of synthesis. The following chart explain different classification of polymers. 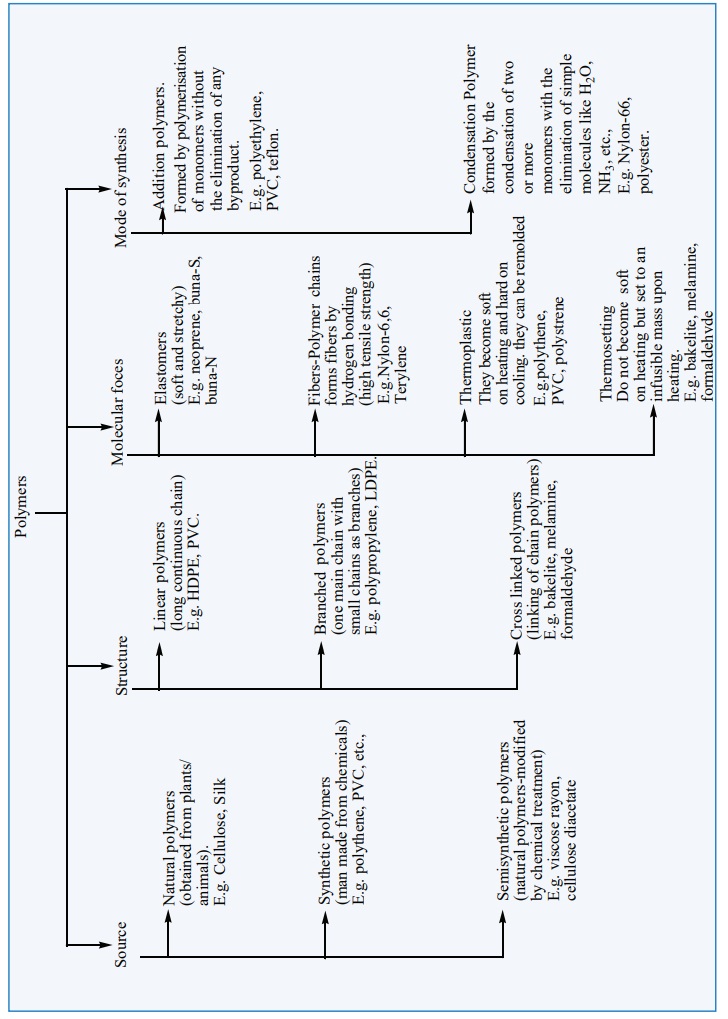 When alkenes are heated with free radical initiator such as benzyl peroxide, they undergo polymerisation reaction. For example styrene polymerises to polystyrene when it is heated to ionic with a peroxide initiator. The mechanism involves the following steps.

Chain growth will continue with the successive addition of several thousands of monomer units.

The above chain reaction can be stopped by stopping the supply of monomer or by coupling of two chains or reaction with an impurity such as oxygen.

3. Preparation of some important addition polymers

It is an addition polymer of ethene. There are two types of polyethylene i) HDPE (High Density Polyethylene) ii) LDPE (Low Density polyethylene).

It is formed by heating ethene at 200o to 300 C under oxygen as a catalyst. The reaction follows free radical mechanism. The peroxides formed from oxygen acts as a free radical initiator.

It is used as insulation for cables, making toys etc…

The polymerization of ethylene is carried out at 373K and 6to7 atm pressure using Zeiglar - Natta catalyst [TiCl4 +(C2H5 )3Al] HDPE has high density and melting point and it is used to make bottles, pipe etc..,

The monomer is tetrafluroethylene. When the monomer is heated with oxygen (or) ammonium persulphate under high pressure, Teflon is obtained.

It is used for coating articles and preparing non – stick utensils.

It is prepared by the addition polymerisation of vinylcyanide (acrylonitrile) using a peroxide initiator.

It is used as a substitute of wool for making blankets, sweaters etc…

Condensation polymers are formed by the reaction between functional groups an adjacent monomers with the elimination of simple molecules like H 2 O, NH3 etc…. Each monomer must undergo at least two substitution reactions to continue to grow the polymer chain i.e., the monomer must be at least bi functional. Examples : Nylon– 6,6, terylene….

Nylon – 6,6 can be prepared by mixing equimolar adipic acid and hexamethylene – diamine to form a nylon salt which on heating eliminate a water molecule to form amide bonds. 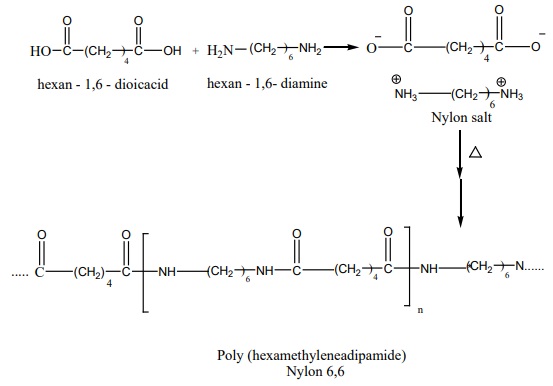 It is used in textiles, manufacture of cards etc…

It is used in the manufacture of tyrecards fabrics etc….

The monomers are ethylene glycol and terepathalic acid (or) dimethylterephthalate. When these monomers are mixed and heated at 500K in the presence of zinc acetate and antimony trioxide catalyst, terylene is formed. 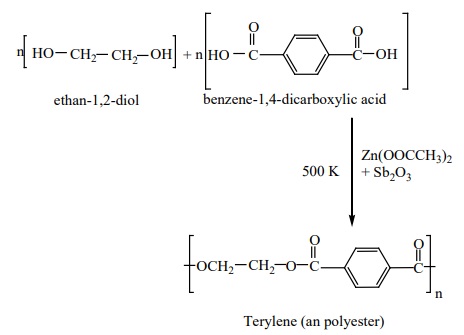 It is used in blending with cotton or wool fibres and as glass reinforcing materials in safety helmets.

The monomers are phenol and formaldehyde. The polymer is obtained by the condensation polymerization of these monomers in presence of either an acid or a base catalyst. 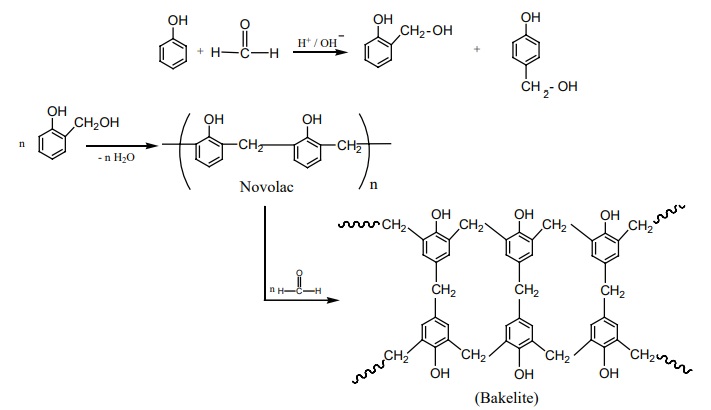 Uses: It is used for making unbreakable crockery

It is formed by the condensation polymerisation of the monomers urea and formaldehyde. 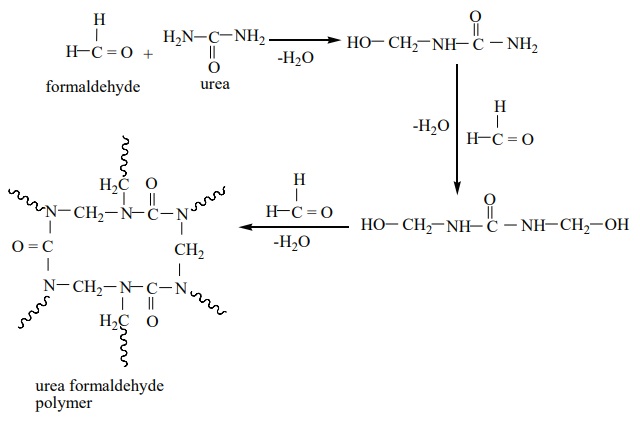 A polymer containing two or more different kinds of monomer units is called a co-polymer. For example, SBR rubber(Buna-S) contains styrene and butadiene monomer units. Co-polymers have properties quite different from the homopolymers.

Rubber is a naturally occurring polymer. It is obtained from the latex that excludes from cuts in the bark of rubber tree (Ficus elastic). The monomer unit of natural rubber is cis isoprene (2-methyl buta-1,3-diene). Thousands of isoprene units are linearly linked together in natural rubber. Natural rubber is not so strong or elastic. The properties of natural rubber can be modified by the process called vulcanization.

In the year 1839, Charles Good year accidently dropped a mixture of natural rubber and sulphur onto a hot stove. He was surprised to find that the rubber had become strong and elastic. This discovery led to the process that Good year called vulcanization.

Natural rubber is mixed with 3-5% sulphur and heated at 100-150˚C causes cross linking of the cis-1,4-polyisoprene chains through disulphide (-S-S-) bonds. The physical properties of rubber can be altered by controlling the amount of sulphur that is used for vulcanization. In sulphur rubber, made with about 1 to 3% sulphur is soft and stretchy. When 3 to 10% sulphur is used the resultant rubber is somewhat harder but flexible.

Polymerisation of certain organic compounds such as buta-1,3-diene or its derivatives gives rubber like polymer with desirable properties like stretching to a greater extent etc., such polymers are called synthetic rubbers.

It is superior to rubber and resistant to chemical action.

Uses: It is used in the manufacture of chemical containers, conveyer belts.

It is a co-polymer of acrylonitrile and buta-1,3-diene.

It is used in the manufacture of hoses and tanklinings.

It is a co-polymer. It is obtained by the polymerisation of buta-1,3-diene and styrene in the ratio 3:1 in the presence of sodium.

The materials that are readily decomposed by microorganisms in the environment are called biodegradable. Natural polymers degrade on their own after certain period of time but the synthetic polymers do not. It leads to serious environmental pollution. One of the solution to this problem is to produce biodegradable polymers which can be broken down by soil micro organism.

Biodegradable polymers are used in medical field such as surgical sutures, plasma substitute etc… these polymers are decomposed by enzyme action and are either metabolized or excreted from the body.

It is the co – polymer of the monomers 3 – hydroxybutanoic acid and 3-hydroxypentanoic acid. In PHBV, the monomer units are joined by ester linkages.

Uses : It is used in ortho paedic devices, and in controlled release of drugs.

It is a co – polymer which contains polyamide linkages. It is obtained by the condensation polymersiation of the monomers, glycine and É - amino caproic acid.