The word drug is derived from the French word “drogue” meaning “dry herb”. A drug is a substance that is used to modify or explore physiological systems or pathological states for the benefit of the recipient.

The word drug is derived from the French word “drogue” meaning “dry herb”. A drug is a substance that is used to modify or explore physiological systems or pathological states for the benefit of the recipient. It is used for the purpose of diagnosis, prevention, cure/relief of a disease.The drug which interacts with macromolecular targets such as proteins to produce a therapeutic and useful biological response is called medicine. The specific treatment of a disease using medicine is known as chemotherapy. An ideal drug is the one which is non-toxic, bio-compatible and bio-degradable, and it should not have any side effects. Generally, most of the drug molecules that are used now a days have the above properties at lower concentrations. However, at higher concentrations, they have side effects and become toxic. The medicinal value of a drug is measured in terms of its therapeutic index, which is defined as the ratio between the maximum tolerated dose of a drug (above which it become toxic) and the minimum curative dose (below which the drug is ineffective). Higher the value of therapeutic index, safer is the drug.

Drugs are classified based on their properties such as chemical structure, pharmacological effect, target system, site of action etc. We will discuss some general classifications here.

Classification based on the chemical structure:

In this classification, drugs with a common chemical skeleton are classified into a single group. For example, ampicillin, amoxicillin, methicillin etc.. all have similar structure and are classified into a single group called penicillin. Similarly, we have other group of drugs such as opiates, steroids, catecholamines etc. Compounds having similar chemical structure are expected to have similar chemical properties. However, their biological actions are not always similar. For example, all drugs belonging to penicillin group have same biological action, while groups such as barbiturates, steroids etc.. have different biological action.

Classification based on Pharmacological effect:

In this classification, the drugs are grouped based on their biological effect that they produce on the recipient. For example, the medicines that have the ability to kill the pathogenic bacteria are grouped as antibiotics. This kind of grouping will provide the full range of drugs that can be used for a particular condition (disease). The physician has to carefully choose a suitable medicine from the available drugs based on the clinical condition of the recipient.

Classification based on the target system (drug action):

In this classification, the drugs are grouped based on the biological system/process, that they target in the recipient. This classification is more specific than the pharmacological classification.For example, the antibiotics streptomycin and erythromycin inhibit the protein synthesis (target process) in bacteria and are classified in a same group. However, their mode of action is different. Streptomycin inhibits the initiation of protein synthesis, while erythromycin prevents the incorporation of new amino acids to the protein.

Classification based on the site of action (molecular target):

The drug molecule interacts with biomolecules such as enzymes, receptors etc,, which are referred as drug targets. We can classify the drug based on the drug target with which it binds. This classification is highly specific compared to the others. These compounds often have a common mechanism of action, as the target is the same.

The biochemical processes such as metabolism (which is responsible for breaking down the food molecules and harvest energy in the form of ATP and biosynthesis of necessary biomolecules from the available precursor molecules using many enzymes),cell-signaling (senses any change in the environment using the receptor molecules and send signals to various processes to elicit an appropriate response) etc… are essential for the normal functioning of our body. These routine processes may be disturbed by any external factors such as microorganism, chemicals etc.. or by a disorder in the system itself. Under such conditions we may have to take medicines to restore the normal functioning of the body.

These drug molecules interact with biomolecules such as proteins, lipids, etc..that are responsible for different functions of the body. For example, proteins which act as biological catalysts are called enzymes and those which are important for communication systems are called receptors. The drug interacts with these molecules and modify the normal biochemical reactions either by modifying the enzyme activity or by stimulating/suppressing certain receptors.

In all living systems, the biochemical reactions are catalysed by enzymes. Hence, these enzyme actions are highly essential for the normal functioning of the system. If their normal enzyme activity is inhibited, then the system will be affected. This principle is usually applied to kill many pathogens.

We have already learnt that in enzyme catalysed reactions, the substrate molecule binds to the active site of the enzyme by means of the weak interaction such as hydrogen bonding, van der Waals force etc… between the amino acids present in the active site and the substrate.

When a drug molecule that has a similar geometry (shape)as the substrate is administered, it can also bind to the enzyme and inhibit its activity.In other words, the drug acts as an inhibitor to the enzyme catalyst. These type of inhibitors are often called competitive inhibitors. For example the antibiotic sulphanilamide, which is structurally similar to p-aminobenzoic acid (PABA) inhibits the bacterial growth. Many bacteria need PABA in order to produce an important coenzyme, folic acid. When the antibiotic sulphanilamide is administered, it acts as a competitive inhibitor to the enzyme dihydropteroate synthase (DHPS) in the biosynthetic pathway of converting PABA into folic acid in the bacteria. It leads to the folic acid deficiency which retards the growth of the bacteria and can eventually kill them.

In certain enzymes, the inhibitor molecule binds to a different binding site, which is commonly referred to as allosteric site, and causes a change in its active site geometry (shape). As a result, the substrate cannot bind to the enzyme. This type of inhibitors are called allosteric inhibitors.

Many drugs exert their physiological effects by binding to a specific molecule called a receptor whose role is to trigger a response in a cell. Most of the receptors are integrated with the cell membranes in such a way that their active site is exposed to outside region of the cell membrane. The chemical messengers, the compounds that carry messages to cells, bind to the active site of these receptors. This brings about the transfer of message into the cell. These receptors show high selectivity for one chemical messenger over the others. If we want to block a message, a drug that binds to the receptor site should inhibit its natural function. Such drugs are called antagonists. In contrast, there are drugs which mimic the natural messenger by switching on the receptor. These type of drugs are called agonists and are used when there is lack of chemical messenger. 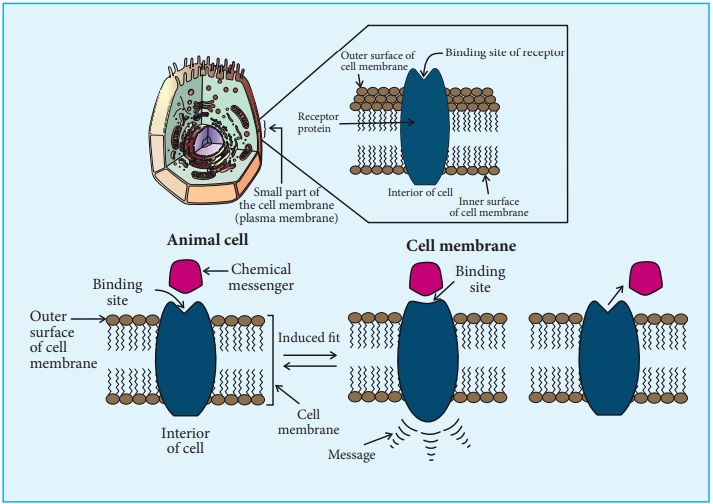 The agonist drug, morphine, which is used as a pain killer, binds to the opioid receptors and activates them. This supress the neuro transmitters that causes pain.

The developments in the field of biology allowed us to understand various biological process and their mechanism in detail. This enabled to develop new safer efficient drugs. For example, to treat acidity, we have been using weak bases such as aluminium and magnesium hydroxides. But these can make the stomach alkaline and trigger the production of much acid. Moreover, This treatment only relives the symptoms and does not control the cause. Detailed studies reveal that histamines stimulate the secretion of HCl by activating the receptor in the stomach wall. This findings lead to the design of new drugs such as cimetidine, ranitidine etc.. which binds the receptor and inactivate them. These drugs are structurally similar to histamine.In this section, we shall discuss the therapeutic action of a few important classes of drugs. 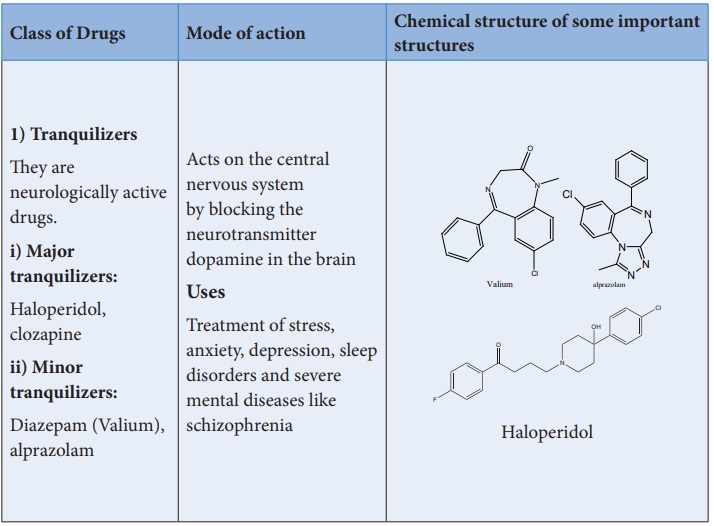 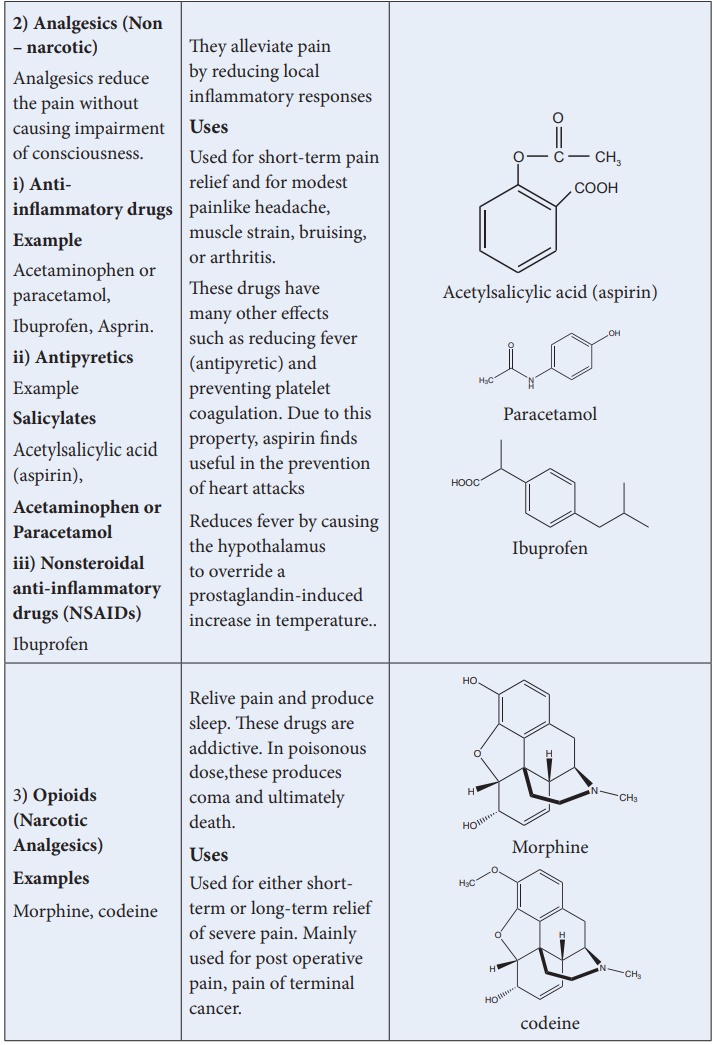 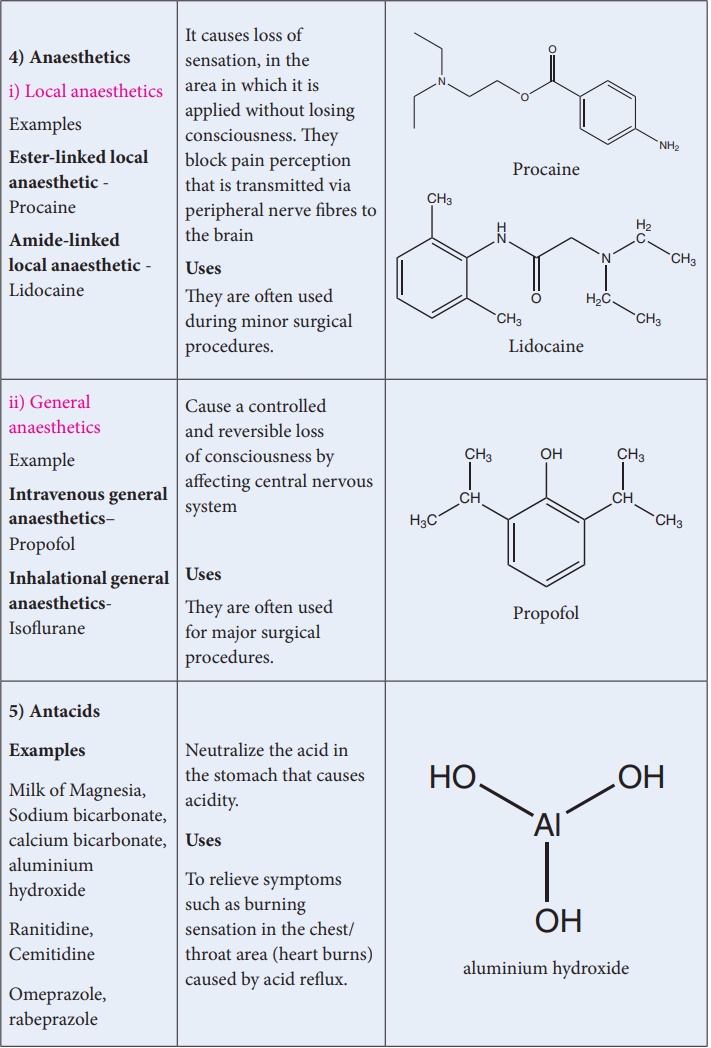 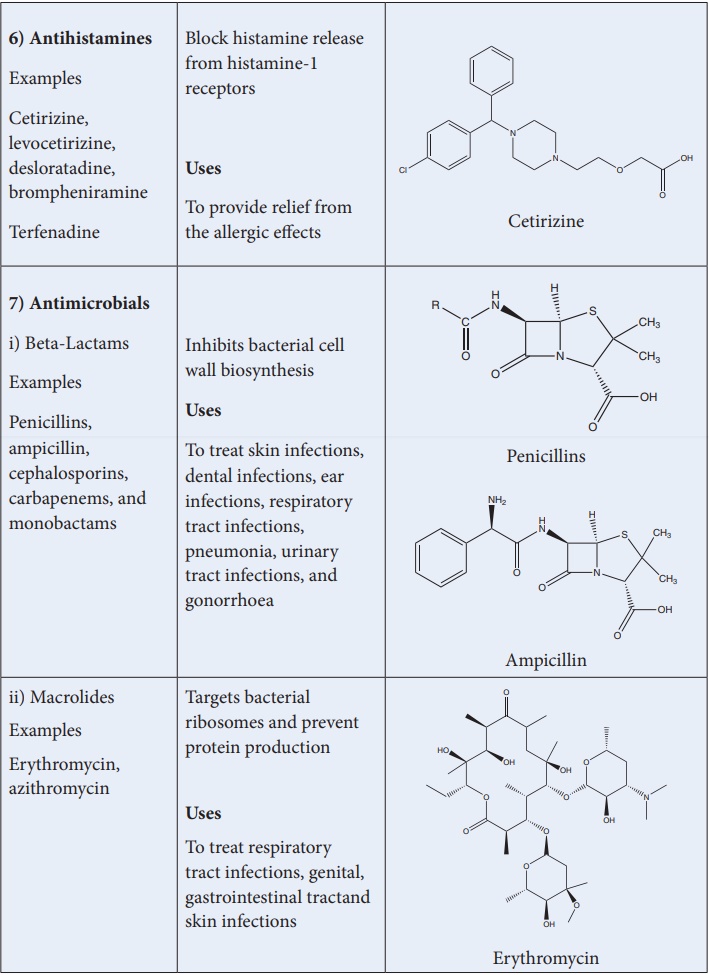 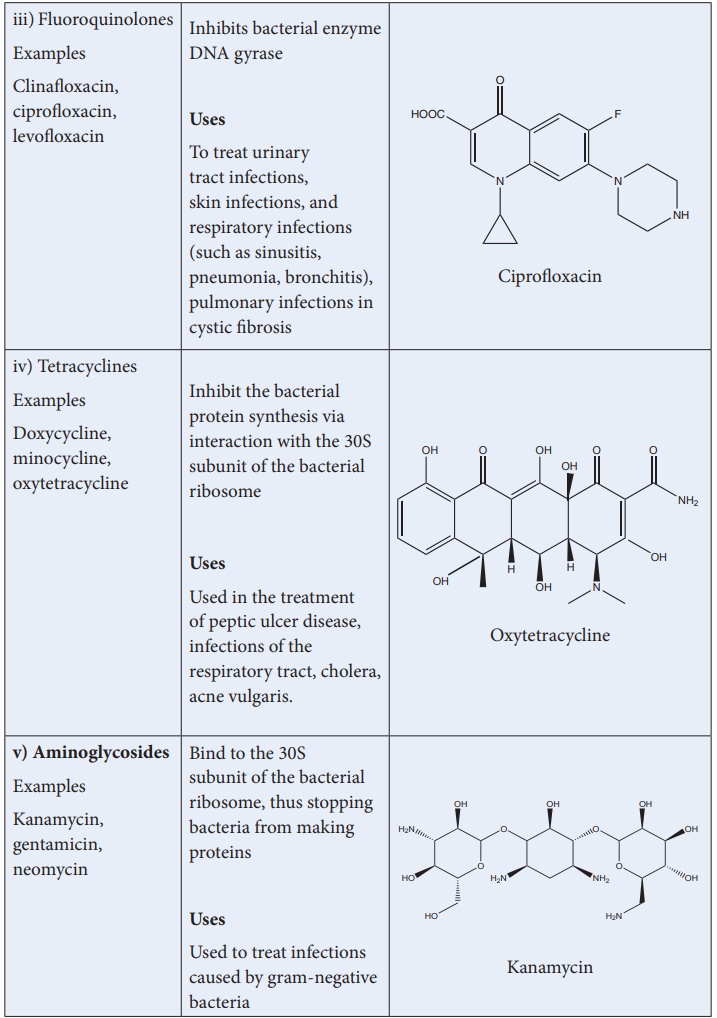 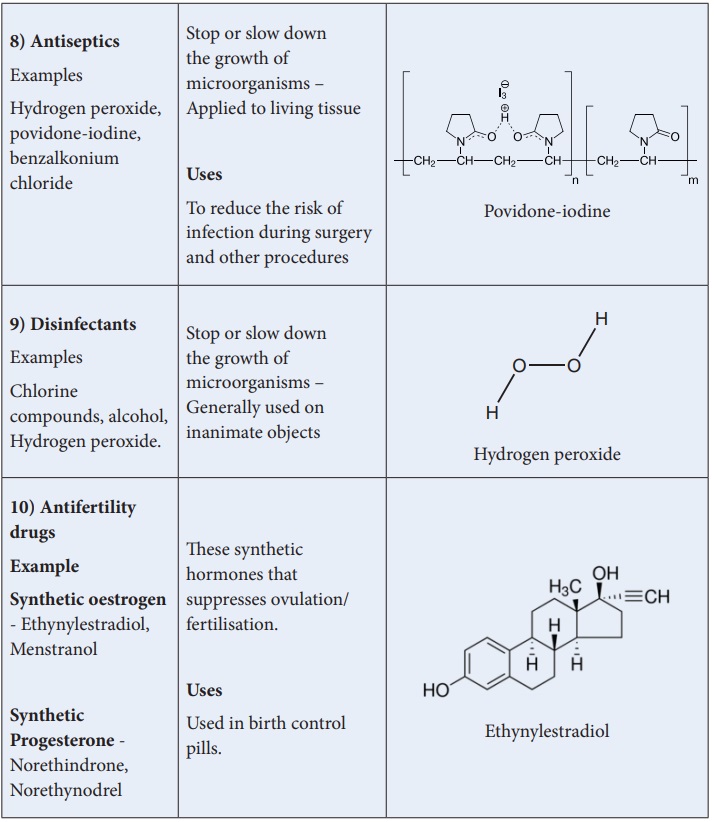