Most infections (perhaps 90%) are either completely subclinical or so mild that they do not come to attention.

Most infections (perhaps 90%) are either completely subclinical or so mild that they do not come to attention. When disease does result, the incubation period ranges from 4 to 35 days, but is usually between 7 and 14 days. Three types of disease can be observed. Abortive poliomyelitis is a nonspecific febrile illness of 2- to 3-day duration with no signs of CNS localization. Aseptic meningitis (nonparalytic poliomyelitis) is characterized by signs of meningeal irritation (stiff neck, pain, and stiffness in the back) in addition to the signs of abortive poliomyelitis; recovery is rapid and complete, usually within a few days. Paralytic poliomyelitis, occurs in less than 2% of infections. It is the major possible outcome of infection and is often preceded by a period of minor illness, sometimes with two or three symptom-free days intervening. There are signs of meningeal irritation, but the hallmark of paralytic poliomyelitis is asymmetric flaccid paralysis, with no significant sensory loss. The extent of involvement varies greatly from case to case; however, in its most serious forms, all four limbs may be completely paralyzed or the brainstem may be attacked, with paralysis of the cranial nerves and muscles of respiration (bulbar polio). The maximum extent of involvement is evident within a few days of first paralysis. Thereafter, as temporarily damaged neurons regain their function, recovery begins and may continue for as long as 6 months; paralysis persisting after this time is permanent.

Two types of poliovirus vaccines are currently licensed in the United States: inactivated

Inactivated polio vaccine (IPV) was introduced in 1955; its use was associated with a dramatic decline in paralytic cases (Fig 36–3). Vaccination is by subcutaneous injection. Primary vaccination with three doses of the present enhanced-potency IPV (two doses 6–8 weeks apart and the third 8–12 months later) produces antibody responses in more than 98% of recipients. 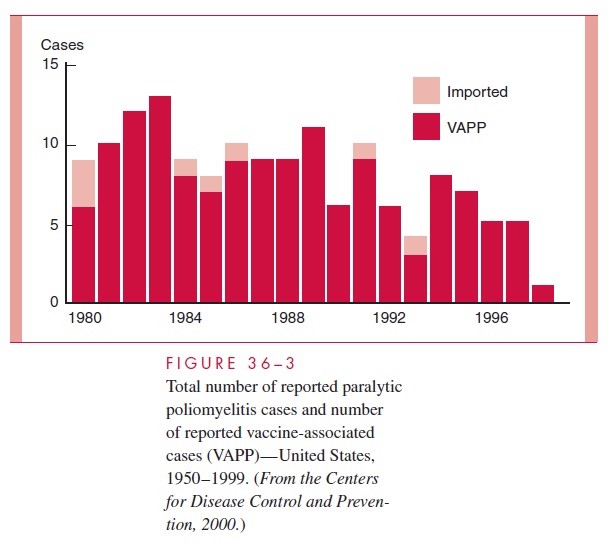 The current product is considered quite safe, with no significant deleterious side effects. Inactivated (Salk) vaccine is used in many countries

Oral polio vaccine (OPV) is composed of live, attenuated viruses that have undergone serial passage in cell cultures from humans and subhuman primates. It was first licensed in the United States in 1963. The vaccine is given orally as a primary series of three doses (the first two doses usually 6–8 weeks apart and the third 8–12 months later) and pro-duces antibodies to all three serotypes in more than 95% of recipients; these antibodies persist for several years. As with IPV, recall boosters are recommended to maintain ade-quate antibody levels. Like wild poliovirus, OPV viruses infect and replicate in the oropharynx and intestinal tract and can be spread to other persons.

One disadvantage of OPV is the remote risk of vaccine-associated paralytic disease in some recipients or their household contacts, including immunocompromised persons. The incidence of vaccine-associated paralytic poliomyelitis is estimated at approximately 1 per 2.4 million doses distributed. Since the end of 1999, exclusive use of IPV has been recommended for all routine immunizations in the United States. OPV is recommended only in special circumstances (eg, an unvaccinated child who will be traveling in less than 4 weeks to an endemic area).

No cases of paralytic poliomyelitis attributed to indigenously acquired wild po-liovirus have occurred in the United States since 1979, and the last case in the Western Hemisphere occurred in 1991. Nevertheless, it must be kept in mind that importation of these strains can readily occur from endemic areas in developing nations. Once intro-duced into a community, the virus can spread rapidly among susceptible individuals. Thus, continuing immunization programs are of utmost importance in preventing spread of this disease. In 1988, the World Health Organization resolved to eradicate polio from the world by the year 2000. Thus far, progress toward that goal has been hampered by political strife and severe poverty in many underdeveloped nations in Africa, Asia and the Middle East.