Enterovirus infections can produce a great diversity of clinical disease.

Enterovirus infections can produce a great diversity of clinical disease. Some cause paralytic disease that may persist permanently (a typical feature of polioviruses), acute inflammation of the meninges with or without involvement of cerebral or spinal tissues, or sepsis-like illnesses in newborn infants. Inflammatory effects at other sites, such as the lungs, pleura, heart, and skin, have been also observed, often without  concomitant  or  preceding  central  nervous  system  (CNS)  involvement. Occasionally, infections may result in chronic, active disease processes.

Humans are the major natural host for the polioviruses, coxsackieviruses, and echoviruses. There are enteroviruses of other animals with limited host ranges that do not appear to extend to humans. Conversely, viruses thought to be identical or related to human en-teroviruses have been isolated from dogs and cats. Whether these agents cause disease in such animals is debatable, and there is no evidence of spread from animals to humans.

The enteroviruses have a worldwide distribution, and asymptomatic infection is common. The proportion of infected individuals who develop illness varies from 2 to 100%, depending on the serotype or strain involved and the age of the patient. Secondary infections in households are common and range as high as 40 to 70%, depending on fac-tors such as family size, crowding, and sanitary conditions.

In some years, certain serotypes emerge as dominant epidemic strains; they then may wane, only to reappear in epidemic fashion years later. For example, echovirus 16 was a major cause of outbreaks in the eastern United States in 1951 and 1974. Coxsackievirus B1 was common in 1963; echovirus 9 in 1962, 1965, 1968, and 1969; and echovirus 30 in 1968 and 1969. The emergence of dominant serotypes is quite unpredictable from year to year. All enteroviruses show a seasonal predilection in temperate climates; epidemics are usually observed during the summer and fall months. In subtropical and tropical climates, the transmission may occur year-round.

Direct or indirect fecal–oral transmission is considered the most common mode of spread. After infection, the virus persists in the oropharynx for 1 to 4 weeks, and it can be shed in the feces for 1 to 18 weeks. Thus, sewage-contaminated water, fecally conta-minated foods, or passive transmission by insect vectors (flies, cockroaches) may occa-sionally be the source of infection. More commonly, however, spread is directly from person to person. This mode of transmission is suggested by the high infection rates seen among young children, whose hygienic practices tend to be less than optimal, and in crowded households. Approximately two thirds of all isolates are from children 9 years of age or younger.

Incubation periods vary, but relatively short intervals (2 to 10 days) are frequent. Of-ten, illness is seen concurrently in more than one family member, and the clinical features vary within the household.

Initial binding of an enterovirus to the cell surface is commonly between an attachment protein in a “canyon” configuration on the virion surface and cell receptors belonging to the immunoglobulin gene superfamily. These receptors map to chromosome 19. A differ-ent receptor, belonging to the integrin group of adhesion molecules, has been identified for at least one echovirus serotype. Following attachment, the virion is enveloped by the cell membrane, and its RNA is released into the cellular cytoplasm where it binds to ribo-somes and commences protein synthesis. Newly synthesized virions are released by lysis to spread to the other cells.

After primary replication in epithelial cells and lymphoid tissues in the upper respira-tory and gastrointestinal tracts, viremic spread to other sites can occur. Potential target or-gans vary according to the virus strain and its tropism, but may include the CNS, heart, vascular endothelium, liver, pancreas, lungs, gonads, skeletal muscles, synovial tissues, skin, and mucous membranes. Histopathologic findings include cell necrosis and mononuclear cell inflammatory infiltrates; in the CNS, the inflammatory cells are local-ized most prominently in perivascular sites. The initial tissue damage is thought to result from the lytic cycle of virus replication; secondary spread to other sites may ensue. Viremia is usually undetectable by the time symptoms appear, and termination of virus replication appears to correlate with the appearance of circulating neutralizing antibody, interferon, and mononuclear cell infiltration of infected tissue. The early dominant anti-body response is with immunoglobulin M (IgM), which usually wanes 6 to 12 weeks af-ter onset to be replaced progressively by increased IgG-specific antibodies. The important role of antibodies in termination of infection, demonstrated in mouse models of group B coxsackievirus infections, is supported by the observation of persistent echovirus and po-liovirus replication in patients with antibody deficiency diseases.

Although initial acute tissue damage may be caused by the lytic effects of the virus on the cell, the secondary sequelae may be immunologically mediated. Enterovirus-caused poliomyelitis, disseminated disease of the newborn, aseptic meningitis, encephalitis, and acute respiratory illnesses, thought to represent primary lytic infections, can usually be identified through routine methods of virus isolation and determination of specific antibody titer changes.

On the other hand, syndromes such as myopericarditis, nephritis, and myositis have been associated with enteroviruses primarily because of serologic and epidemiologic evidence. In many of these cases, viral isolation is the exception rather than the rule. The pathogenesis of these latter infections is not clear; however, observa-tions suggest that the acute infectious phase of the virus may be mild or subclinical and often subsides by the time clinical illness becomes evident. Illness may represent a host immunologic response to tissue injury by the virus or to viral or virus-induced antigens that persist in the affected tissues. In experimental group B coxsackievirus myocarditis, mononuclear inflammatory cells (monocytes, natural killer lymphocytes) seem to play a greater role than antibody in termination of infection, and the persistence of inflammation after disappearance of detectable infectious virus or viral antigen appears to be mediated by cytotoxic T lymphocytes. Experimental findings have led to another hypothesis regard-ing pathogenic mechanisms, called molecular mimicry. This is best conceptualized as a form of virus-induced autoimmune response. It is known that small peptide sequences on viral epitopes can sometimes be shared by host tissues. Thus, an immune response produced by the virus may also generate antibodies or cytotoxic cross-reactive effector lymphocytes that recognize shared determinants located on host cells. For example, a monoclonal antibody directed against a neutralizing site of a group B coxsackievirus has also been shown to react strongly with normal myocardial cells.

Infection by a specific serotype in an immunologically normal host is followed by a hu-moral antibody response, which can often be detected by neutralization methods for many years thereafter (Fig 36–1). There is relative immunity to reinfection by the same serotype; however, reinfection has been reported, usually resulting in subclinical infection or mild illness. 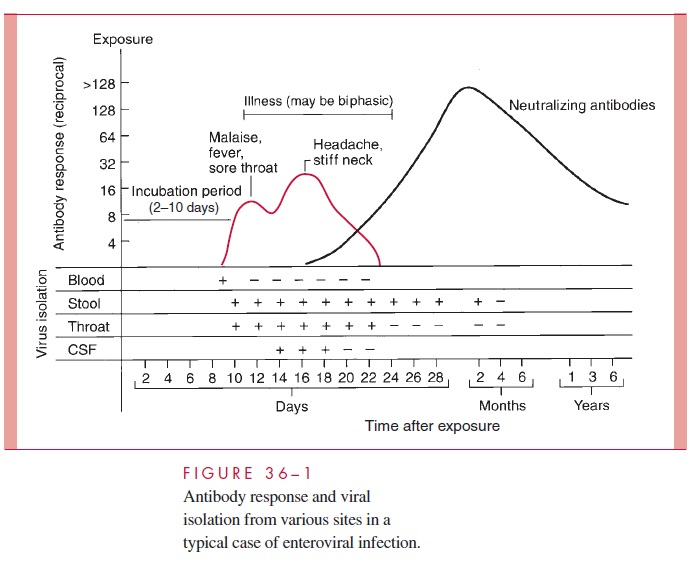