The coxsackieviruses and echoviruses are widespread throughout the world.

The coxsackieviruses and echoviruses are widespread throughout the world. Their epidemiology and pathogenesis are much the same as those of the polioviruses. Unlike polioviruses, they have a greater tendency to affect the meninges and occasionally the cerebrum, but only a few affect anterior horn cells.

The consequences of infection with these agents are highly variable and related only in part to virus subgroup and serotype. Up to 60% of infections are subclinical.

The main interest in these agents stems from their ability to cause more serious illness, which becomes most evident during epidemics of infection with a particular agent. Inapparent infection is common. Illness manifestations vary from mild to lethal. Table 36–2 lists the major syndromes and serotypes commonly associated with each. However, considerable overlap occurs, and one should not be surprised if an enteroviral serotype found in con- nection with a specific syndrome differs from that most often encountered. 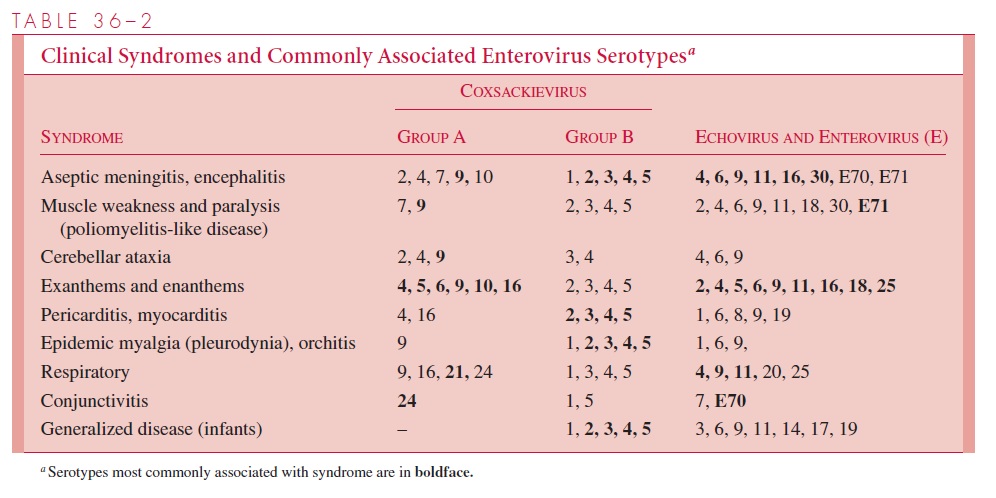 Aseptic meningitis is the most frequently recognized clinical illness associated with enterovirus infections. This syndrome can be mild and self-limiting, lasting 5 to 14 days;

however, it is sometimes accompanied by encephalitis, which can lead to permanent neurologic

Acute inflammation of the heart muscle (myocarditis), its covering membranes (pericarditis), or both can be caused by a variety of viral agents. Group B coxsackieviruses are the most commonly implicated enteroviruses. Such infections are usually self-limiting but may be fatal in the acute phase (arrhythmia or heart failure) or progress to chronic dilated myocardiopathy.

The exanthems are often not associated with CNS inflammation. They can resemble rubella, roseola infantum, or adenoviral macular or maculopapular exanthems but may also appear as vesicular or hemangioma-like lesions. One interesting syndrome is hand-foot-and-mouth disease, which usually affects children and is characterized by a vesicular eruption over the extremities and the oral cavity. Coxsackie virus A16 is most commonly implicated, but others, such as enterovirus 71, can cause a similar illness. Herpangina is an enanthematous (mucous membrane–affecting) febrile disease in which small vesicles or white papules (lymphonodules) surrounded by a red halo are seen over the posterior palate, pharynx, and tonsillar areas. This mild, self-limiting (1 to 2 week) illness has usually been associated with infection by several different group A coxsackievirus serotypes.

Epidemic myalgia (pleurodynia or Bornholm disease) is characterized by fever and sudden onset of intense upper abdominal or thoracic pain. The pain may be aggravated by movement, such as breathing or coughing, and can persist as long as 14 days. Group B coxsackieviruses are often implicated.

Generalized disease of the newborn is a disseminated, often lethal enteroviral infection characterized by pathologic changes in the heart, brain, liver, and other organs.

It is apparent from Table 36–2 that the spectrum of disease produced by these viruses is enormous and that many other illnesses may also result from infections by this sub-group. Epidemics of acute hemorrhagic keratoconjunctivitis associated with enterovirus 70 and localized outbreaks of disease resembling paralytic poliomyelitis caused by en-terovirus 71 infection have been described. In addition, there is evidence that certain en-teroviruses, particularly group B coxsackievirus serotypes, may sometimes participate in the pathogenesis of insulin-dependent diabetes mellitus, acute arthritis, polymyositis, and idiopathic acute nephritis. Further investigations are required to establish whether such associations are significant.