To date, it has not been possible to cultivate P. carinii. Our knowledge of its nature rests on morphologic observations and the study of organisms purified from infected lungs.

To date, it has not been possible to cultivate P. carinii. Our knowledge of its nature rests on morphologic observations and the study of organisms purified from infected lungs. Until recently, P. carinii was believed to be a protozoan, and its “life cycle” was deduced from static images seen in infected tissues. The observed stages include a delicate 5- to 8-μm cystic structure within which elliptical subunits grow and repeat the cycle on rup-ture of the cyst. In parasitic parlance, these were called trophozoites, precysts, and cysts. The corresponding mycologic terms based on the same observations are spore, sporocyte, and spore case (Fig 50–1). 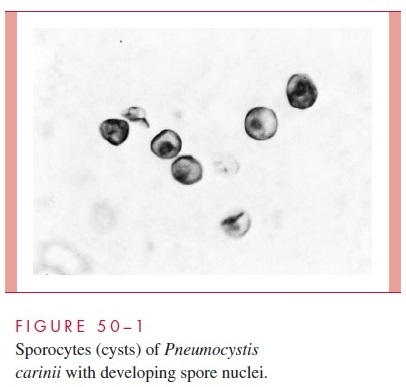 The spherical sporocyte (precyst) is bounded by a cell wall and cytoplasmic mem-brane that enclose a nucleus and several mitochondria. As the precyst matures, the nuclei divide to form the eight spores (trophozoites) within the original structure to form the spore case (cyst). The spores have an eccentric nucleus, a nucleolus, and a single mito-chondrion in the cytoplasm.

The confusion about the classification of Pneumocystis is understandable. The shape, nucleus, and reticular cytoplasm of the sporesresemble protozoa, as does their aggrega-tion into the cyst-like spore case. The cell wall lacks the rigidity typical of other fungi; however, biochemical elements of the fungal cell wall appear to be present. These include glucan and N-acetylglucosamine, the major subunit of chitin. The dominant sterol of the P. carinii cytoplasmic membrane is cholesterol, rather than the ergosterol characteristic offungi. Other biochemical analyses, however, support the fungal nature such as the pres-ence of elements of protein synthesis (elongation factor 3) that is unique to fungi. The fungal classification of P. carinii is most strongly supported by sequence analysis of the genes coding for ribosomal RNA, mitochondrial proteins, and major enzymes. These se-quences show the closest homology with fungi and molecular phylogenic analysis, which places Pneumocystis near the ascomycetes.