Plants improve their nutrition by symbiosis with fungi

Frequently plant growth is limited by the supply of nutrients other than nitrate, e.g., phosphate. Because of its low solubility, the extraction of phosphate by the roots from the soil requires very efficient uptake systems.

Plants improve their nutrition by symbiosis with fungi

Frequently plant growth is limited by the supply of nutrients other than nitrate, e.g., phosphate. Because of its low solubility, the extraction of phosphate by the roots from the soil requires very efficient uptake systems. For this reason, plant roots possess very high affinity transporters, with a half saturation of 1 to 5 µM phosphate, where the phosphate transport is driven by proton symport, similar to the transport of nitrate. In order to increase the uptake of phosphate, but also of other mineral nutrients (e.g., nitrate and potassium), most plants enter a symbiosis with fungi. Fungi are able to form a mycelium with hyphae that have a much lower diameter than root hairs and are therefore well suited to penetrate soil particles, thereby mobilizing the nutrients. The symbiotic fungi (microsymbionts) deliver these nutrients to the plant root (macrosymbiont) and are in turn supplied by the plant with carbon metabolites for maintaining their own metabolism.

The arbuscular mycorrhiza is widespread

The arbuscular mycorrhiza has been detected in more than 80% of all terrestrial plant species. In this symbiosis the fungus penetrates the cortex of plant roots by a plant controlled process and forms a network of hyphae, which protrude into cortical cells and form treelike invaginations, termed arbuscules (Fig. 11.9), or form hyphal coils. The boundary membranes of fungus and host remain intact. The arbuscules form a large surface, enabling an efficient exchange of compounds between the fungus and the host. The fungus delivers phosphate, nitrate, K+ ions, and water, and the host delivers carbohydrates. The arbus-cules have a lifetime of less than two weeks, but the subsequent degeneration does not damage the corresponding host cell. Therefore, the maintenance of symbiosis requires a constant formation of new arbuscules. The arbuscular mycorrhiza evolved at a very early stage of plant evolution about 450 million years ago. Whereas the number of plant species capable of forming an arbuscu-lar mycorrhiza is very large (about 80% of terrestrial plants), there are only six genera of fungi capable of forming microsymbionts, resulting in rather unspe-cific plant-fungus combinations. Since the supply of the symbiotic fungi by the roots demands a high amount of assimilates, in many plants the establishment of mycorrhiza depends on the phosphate availability in the soil. 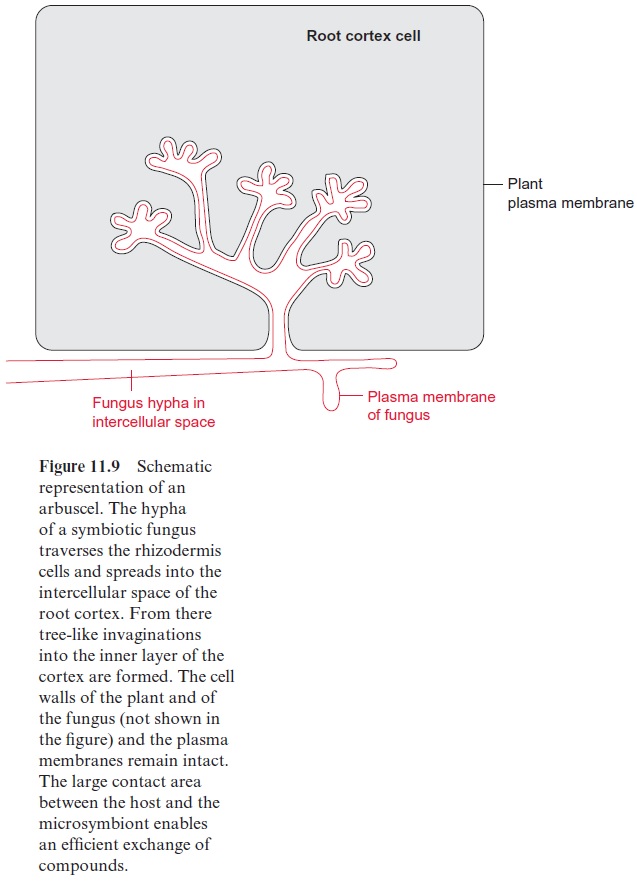 Many trees in temperate and cool climates form a symbiosis with fungi termed ectomycorrhiza. In this the hyphae of the fungi do not penetrate the cortex cells, but colonize only the surface and the intercellular space of the cortex with a network of hyphae, termed Hartig net, which is con-nected to a very extensive mycel in the soil. Microsymbionts are Asco- and Basiodiomycetae from more than 60 genera, including several mushrooms. The plant roots colonized by the fungi become thicker and do not form root hairs. The uptake of nutrients and water is delegated to the microsymbi-ont, which in turn is served by the plant with carbon metabolites to main-tain its metabolism. The exchange of compounds occurs, as in arbuscular mycorrhiza, via closely neighbored fungal and plant plasma membranes. The ectomycorrhiza also enables a transfer of assimilates between adjacent plants. Ectomycorrhiza are of great importance for the growth of trees, such as beech, oak, and pine, as it increases the uptake of phosphate by a factor of three to five. It has been observed that the formation of ectomycorrhiza is negatively affected when the nitrate content of the soil is high. This may explain the damaging effect of nitrogen input to forests by air pollution.

Other forms of mycorrhiza (e.g., the endomycorrhiza with orchids and Ericaceae) will not be discussed here.