N2 fixation can proceed only at very low oxygen concentrations

The dinitrogenase is extremely sensitive to oxygen. Therefore N2 fixation can proceed only at very low oxygen concentrations.

N2 fixation can proceed only at very low oxygen concentrations

The dinitrogenase is extremely sensitive to oxygen. Therefore N2 fixation can proceed only at very low oxygen concentrations. The nodules form an anaerobic compartment. Since N2 fixation depends on the uptake of nitro-gen from the air, the question arises how the enzyme is protected against the oxygen present in the air. The answer is that oxygen, which has diffused together with nitrogen into the nodules, is consumed by the respiratory chain present in the bacteroid membrane. Due to a very high affinity of the bacter-oid cytochrome-a/a3 complex, respiration is still possible with an oxygen concentration of only 10 -9 mol/L. As described previously, at least a total of 16 molecules of ATP are required for the fixation of one molecule of N2. Upon oxidation of one molecule of NADH, about 2.5 molecules of ATP are generated by the mitochondrial respiratory chain . In the bacte-rial respiratory chain, which normally has a lower degree of coupling than that of mitochondria, only about two molecules of ATP may be formed per molecule of NADH oxidized. Thus about four molecules of O2 have to be consumed to facilitate the formation of 16 molecules of ATP (Fig. 11.8). If the bacteroids additionally possess a hydrogenase, required for the oxida-tion of H2 that is released during N2 fixation, oxygen consumption is further increased by half an O2 molecule. Thus for each N2 molecule at least four O2 molecules are consumed by bacterial respiration (O2/N2>=4). In contrast, the O2/N2 ratio in air is about 0.25. This comparison shows that air required for N2fixation contains far too little oxygen in relation to nitrogen. 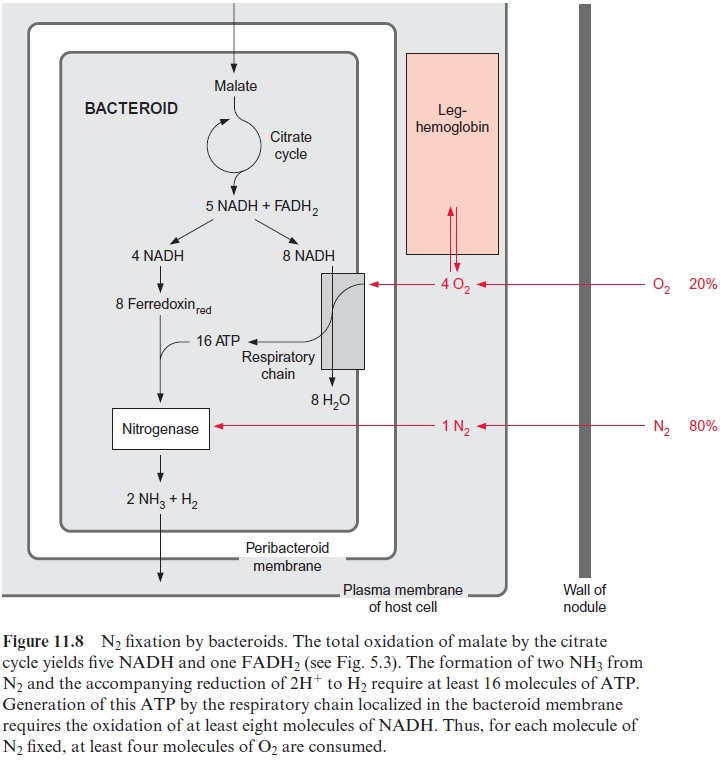 The outer layer of the nodules is a considerable diffusion barrier for the entry of air. The diffusive resistance is so high that bacteroid respiration is limited by the uptake of oxygen. This leads to the astonishing situation that N2 fixation is limited by influx of O2 which is needed for the formation of the ATP required. Experiments by Fraser Bergersen (Australia) verified this. He observed in soybean nodules that a doubling of the O2 content in air (with a corresponding decrease of the N2 content) resulted in a doubling of the rate of N2 fixation. Because of the O 2 sensitivity of the nitrogenase, however, a further increase in O2 resulted in a steep decline in N2fixation.

The cells infected by rhizobia accumulate leghemoglobin, which is very similar to the myoglobin of animals, but has a 10-fold higher affinity for oxy-gen. The oxygen concentration required for half saturation of leghemoglobin amounts to only 10–20×10 9 mol/L. Leghemoglobin is located in the cytosol of the host cell—outside the peribacteroid membrane—and present there in unusually high concentrations (3×10 -3 mol/L in soybeans). Leghemoglobin can amount to 25% of the total soluble protein of the nodules and gives them a pink color. It has been proposed that leghemoglobin plays a role in the trans-port of oxygen within the nodules. However, it is more likely that it serves as an oxygen buffer to ensure continuous electron transport in the bacteroids at the very low prevailing O2concentration in the nodules.