Physiology of the Monocyte/Macrophage

The two populations of phagocytic cells share many common characteristics, such as · Presence of Fcγ and C3b receptors on their membranes · Ability to engulf bacteria and particles · Metabolic and enzymatic killing mechanisms and pathways

PHYSIOLOGY OF THE MONOCYTE/MACROPHAGE

A. Comparison of PMN Leukocytes and Monocyte/Macrophages

The two populations of phagocytic cells share many common characteristics, such as

In contrast, other functions and metabolic pathways differ considerably between these two types of cells (see Table 13.1). One important distinguishing feature is the involvement of the monocyte/macrophage series of cells in the inductive stages of the immune response, due to their ability to process antigens and present antigen-derived peptides to the immune system. The monocyte/macrophage is also involved in immunoregulatory signals, provid-ing both activating signals (in the form of IL-1, IL-6, and IL-12) and downregulating sig-nals (in the form of PGE2) to T lymphocytes. 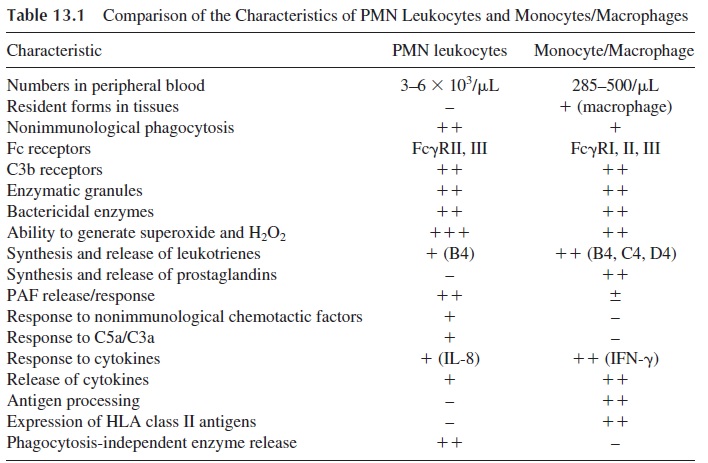 These two types of phagocytic cells have different preferences as far as phagocyto-sis is concerned. For example, PMN leukocytes are able to ingest inert particles such as la-tex but have very little ability to engulf antibody-coded homologous erythrocytes, while the reverse is true for the monocyte/macrophage. On the other hand, while neutrophils seem to be constitutively ready to ingest particulate matter, the circulating monocytes and the tis-sue-fixed (resident) macrophages are usually resting cells that need to be activated by sev-eral types of stimuli before they can fully express their phagocytic and killing properties. The activating factors include microorganisms or their products and cytokines. The main activating cytokine is interferon-γ , released by activated TH1 cells.

B. The Activated Macrophage

This cell type has unique morphological and functional characteristics. Morphologically, the activated macrophage is larger, and its cytoplasm tends to spread and attach to surfaces. The composition of the plasma membrane is changed, and the rates of pinocytosis and en-gulfment are increased (phagocytosis through C3b receptors is only seen after activation). Intracellularly, there is a marked increase in enzymatic contents, particularly of plasmino-gen activator, collagenase, and elastase, and the oxidative metabolism (leading to genera-tion of superoxide and H2O2) as well as the activity of iNOS are greatly enhanced.

As cells die, either by apopotosis or by necrosis, they express cell membrane markers that allow ingestion by macrophages, dendritic cells, and related cells. This results in the pre-sentation of peptides derived from the dead cells on MHC-I molecules, which in turn may be involved in the induction of autoimmune responses. In physiological conditions the in-gestion of dead cells by tissue macrophages is associated with the release of anti-inflamma-tory cytokines such as TGF-β and IL-10, and the immune system remains ignorant of the presented self peptides. However, upon presentation of peptides derived from ingested dead cells in association with MHC-I molecules by dendritic cells, a CD8+ immune response against those peptides is elicited. It can be theorized that if the dead cells are ingested in non-physiological conditions, e.g., as a consequence of the reaction against an infective agent, the likelihood for uptake and presentation in conditions favorable to the induction of an im-mune response increases. Such immune responses have been postulated to play a significant role in the emergence of autoimmune diseases.