Physical Characteristics of the Circulation

The circulation, shown in Figure 14–1, is divided into the systemic circulation and the pulmonary circulation.

Physical Characteristics of the Circulation 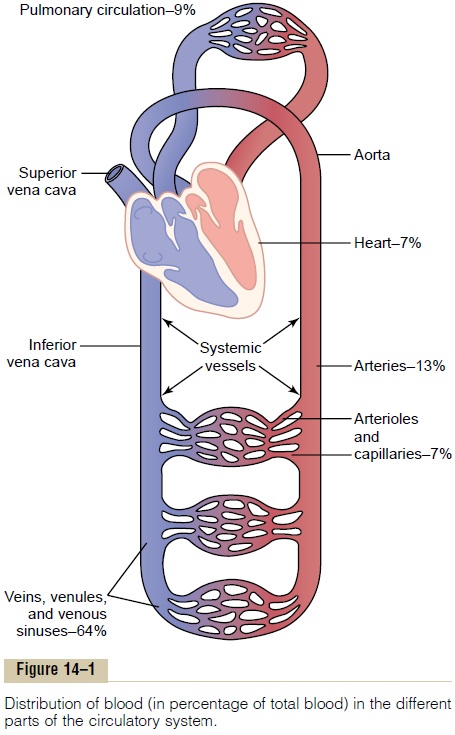 Functional Parts of the Circulation. Before discussing the details of circulatory func-tion, it is important to understand the role of each part of the circulation.

The function of the arteries is to transport blood under high pressure to the tissues. For this reason, the arteries have strong vascular walls, and blood flows at a high velocity in the arteries.

The arterioles are the last small branches of the arterial system; they act as control conduits through which blood is released into the capillaries. The arte-riole has a strong muscular wall that can close the arteriole completely or can, by relaxing, dilate it severalfold, thus having the capability of vastly altering blood flow in each tissue bed in response to the need of the tissue.

The function of the capillaries is to exchange fluid, nutrients, electrolytes, hormones, and other substances between the blood and the interstitial fluid. To serve this role, the capillary walls are very thin and have numerous minute capillary pores permeable to water and other small molecular substances.

The venules collect blood from the capillaries, and they gradually coalesce into progressively larger veins.

The veins function as conduits for transport of blood from the venules back to the heart; equally important, they serve as a major reservoir of extra blood. Because the pressure in the venous system is very low, the venous walls are thin. Even so, they are muscular enough to contract or expand and thereby act as a controllable reservoir for the extra blood, either a small or a large amount, depending on the needs of the circulation.

Most surprising is the low blood volume in the cap-illaries. It is here, however, that the most important function of the circulation occurs, diffusion of sub-stances back and forth between the blood and the tissues.

Cross-Sectional Areas and Velocities of Blood Flow. If all thesystemic vessels of each type were put side by side,their approximate total cross-sectional areas for the average human being would be as follows:

Note particularly the much larger cross-sectional areas of the veins than of the arteries, averaging about four times those of the corresponding arteries. This explains the large storage of blood in the venous system in comparison with the arterial system.

Because the same volume of blood must flow through each segment of the circulation each minute, the velocity of blood flow is inversely proportional to vascular cross-sectional area. Thus, under resting con-ditions, the velocity averages about 33 cm/sec in the aorta but only 1/1000 as rapidly in the capillaries, about 0.3 mm/sec. However, because the capillaries have a typical length of only 0.3 to 1 millimeter, the blood remains in the capillaries for only 1 to 3 seconds. This short time is surprising because all diffusion of nutrient food substances and electrolytes that occurs through the capillary walls must do so in this exceed-ingly short time.

Pressures in the Various Portions of the Circulation. Becausethe heart pumps blood continually into the aorta, the mean pressure in the aorta is high, averaging about 100 mm Hg. Also, because heart pumping is pulsatile, the arterial pressure alternates between a systolic pres-sure level of 120 mm Hg and a diastolic pressure level of 80 mm Hg, as shown on the left side of Figure 14–2. 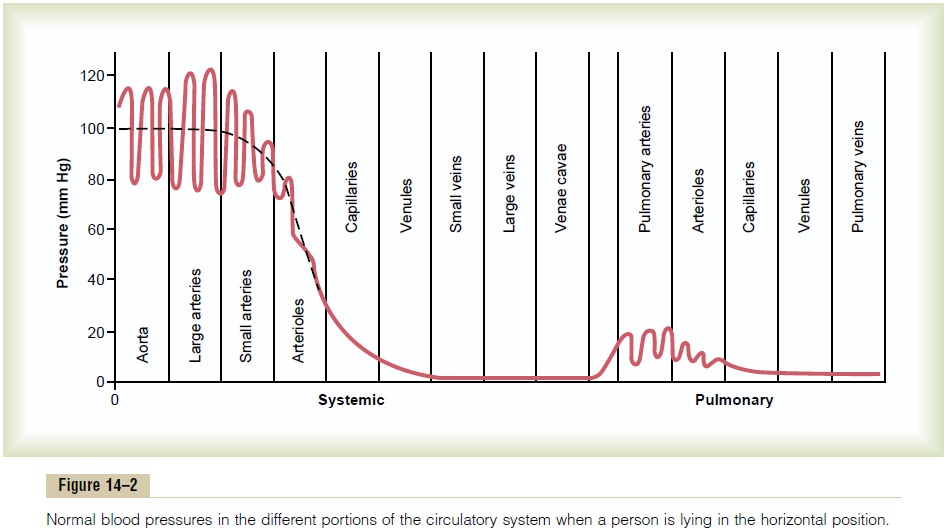 As the blood flows through the systemic circulation, its mean pressure falls progressively to about 0 mm Hg by the time it reaches the termination of the venae cavae where they empty into the right atrium of the heart.

The pressure in the systemic capillaries varies from as high as 35 mm Hg near the arteriolar ends to as low as 10 mm Hg near the venous ends, but their average “functional” pressure in most vascular beds is about 17 mm Hg, a pressure low enough that little of the plasma leaks through the minute pores of the capillary walls, even though nutrients can diffuse easily through these same pores to the outlying tissue cells.