Blood flow means simply the quantity of blood that passes a given point in the circulation in a given period of time.

Blood flow means simply the quantity of blood that passes a given point in the circulation in a given period of time.

The overall blood flow in the total circulation of an adult person at rest is about 5000 ml/min. This is called the cardiac outputbecause it is the amount of blood pumped into the aorta by the heart each minute.

Methods for Measuring Blood Flow. Many mechanical andmechanoelectrical devices can be inserted in series with a blood vessel or, in some instances, applied to the outside of the vessel to measure flow. They are called flowmeters.

Electromagnetic Flowmeter. One of the most importantdevices for measuring blood flow without opening the vessel is the electromagnetic flowmeter, the principles of which are illustrated in Figure 14–4. Figure 14–4A shows the generation of electromotive force (electrical voltage) in a wire that is moved rapidly in a cross-wise direction through a magnetic field. This is the well-known principle for production of electricity by the electric generator. Figure 14–4B shows that the same principle applies for generation of electromotive force in blood that is moving through a magnetic field. In this case, a blood vessel is placed between the poles of a strong magnet, and electrodes are placed on the two sides of the vessel perpendicular to the magnetic lines of force. When blood flows through the vessel, an electrical voltage proportional to the rate of blood flow is generated between the two electrodes, and this is recorded using an appropriate voltmeter or electronic recording apparatus. Figure 14–4C shows an actual “probe” that is placed on a large blood vessel to record its blood flow. The probe contains both the strong magnet and the electrodes. 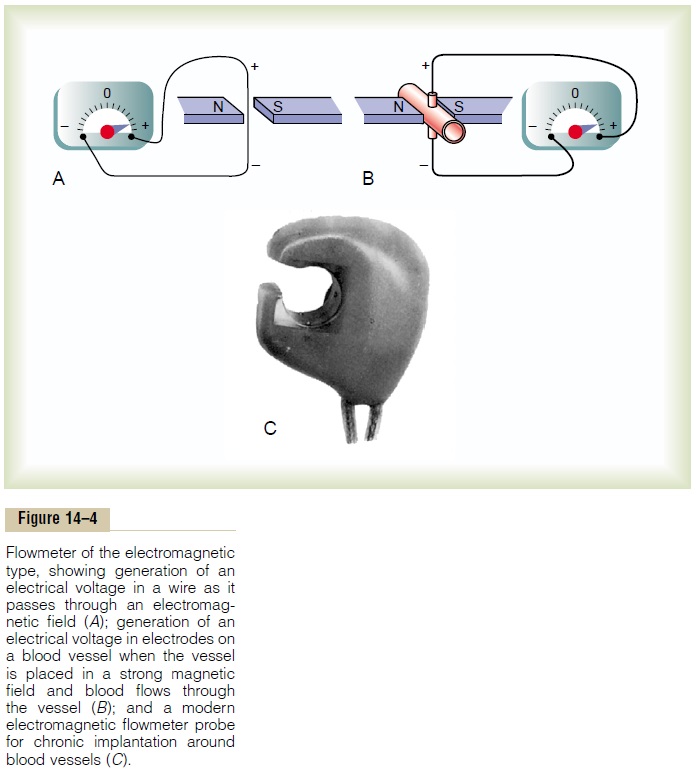 A special advantage of the electromagnetic flowme-ter is that it can record changes in flow in less than 1/100 of a second, allowing accurate recording of pulsatile changes in flow as well as steady flow.

Ultrasonic Doppler Flowmeter. Another type offlowmeterthat can be applied to the outside of the vessel and that has many of the same advantages as the electromagnetic flowmeter is the ultrasonic Doppler flowmeter, shown in Figure 14–5. A minute piezoelectric crystal is mounted at one end in the wall of the device. This crystal, when energized with an appropriate electronic apparatus, transmits ultrasound at a frequency of several hun-dred thousand cycles per second downstream along the flowing blood. A portion of the sound is reflected by the red blood cells in the flowing blood. The reflected ultra-sound waves then travel backward from the blood cells toward the crystal. These reflected waves have a lower frequency than the transmitted wave because the red cells are moving away from the transmitter crystal. This is called the Doppler effect. (It is the same effect that one experiences when a train approaches and passes by while blowing its whistle. Once the whistle has passed by the person, the pitch of the sound from the whistle suddenly becomes much lower than when the train is approaching.)

For the flowmeter shown in Figure 14–5, the high-frequency ultrasound wave is intermittently cut off, and the reflected wave is received back onto the crystal and amplified greatly by the electronic apparatus. Another portion of the electronic apparatus determines the frequency difference between the transmitted wave and the reflected wave, thus determining the velocity of blood flow. 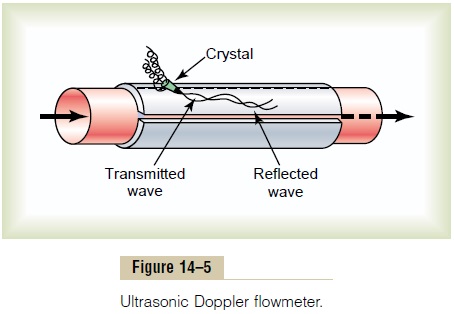 Like the electromagnetic flowmeter, the ultrasonic Doppler flowmeter is capable of recording rapid, pul-satile changes in flow as well as steady flow.

Laminar Flow of Blood in Vessels. When bloodflows at asteady rate through a long, smooth blood vessel, it flows in streamlines, with each layer of blood remaining the same distance from the vessel wall. Also, the central most portion of the blood stays in the center of the vessel. This type of flow is called laminar flow or stream-line flow, and it is the opposite of turbulent flow, whichis blood flowing in all directions in the vessel and continually mixing within the vessel, as discussed subsequently. 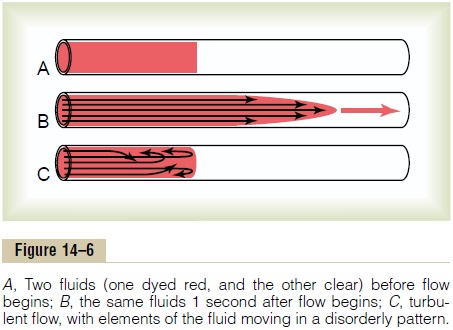 Parabolic Velocity Profile During Laminar Flow.  When laminar flow occurs, the velocity of flow in the center of the vessel is far greater than that toward the outer edges. This is demonstrated in Figure 14–6. In Figure 14–6A, a vessel contains two fluids, the one at the left colored by a dye and the one at the right a clear fluid, but there is no flow in the vessel. When the fluids are made to flow, a parabolic interface develops between them, as shown 1 second later in Figure 14–6B; the portion of fluid adja-cent to the vessel wall has hardly moved, the portion slightly away from the wall has moved a small distance, and the portion in the center of the vessel has moved a long distance. This effect is called the “parabolic profile for velocity of blood flow.”

The cause of the parabolic profile is the following:The fluid molecules touching the wall barely move because of adherence to the vessel wall. The next layer of mol-ecules slips over these, the third layer over the second, the fourth layer over the third, and so forth. Therefore, the fluid in the middle of the vessel can move rapidly because many layers of slipping molecules exist between the middle of the vessel and the vessel wall; thus, each layer toward the center flows progressively more rapidly than the outer layers.

Turbulent Flow of Blood Under Some Conditions. When the rateof blood flow becomes too great, when it passes by an obstruction in a vessel, when it makes a sharp turn, or when it passes over a rough surface, the flow may then become turbulent, or disorderly, rather than streamline (see Figure 14–6C). Turbulent flow means that the blood flows crosswise in the vessel as well as along the vessel, usually forming whorls in the blood called eddy cur-rents. These are similar to the whirlpools that onefrequently sees in a rapidly flowing river at a point of obstruction.

When eddy currents are present, the blood flows with much greater resistance than when the flow is stream-line because eddies add tremendously to the overall friction of flow in the vessel.

where Re is Reynolds’ number and is the measure of the tendency for turbulence to occur, n is the mean velocity of blood flow (in centimeters/second), d is the vessel diameter (in centimeters), ρ is density, and h is the vis-cosity (in poise). The viscosity of blood is normally about 1/30 poise, and the density is only slightly greater than 1. When Reynolds’ number rises above 200 to 400, turbulent flow will occur at some branches of vessels but will die out along the smooth portions of the vessels. However, when Reynolds’ number rises above approx-imately 2000, turbulence will usually occur even in a straight, smooth vessel.

Reynolds’ number for flow in the vascular system even normally rises to 200 to 400 in large arteries; as a result there is almost always some turbulence of flow at the branches of these vessels. In the proximal portions of the aorta and pulmonary artery, Reynolds’ number can rise to several thousand during the rapid phase of ejection by the ventricles; this causes considerable tur-bulence in the proximal aorta and pulmonary artery where many conditions are appropriate for turbulence:(1) high velocity of blood flow, (2) pulsatile nature of the flow, (3) sudden change in vessel diameter, and (4) large vessel diameter. However, in small vessels, Reynolds’ number is almost never high enough to cause turbulence.