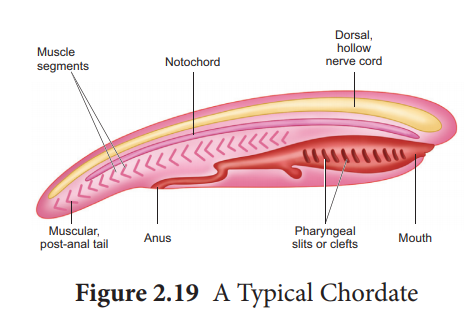 Chordata is the largest phylum with most familiar group of animals, such as fishes, amphibians, reptiles, birds and mammals and less known forms such as lancelets (Amphioxus) and tunicates (Ascidian). All chordates possess three fundamental distinct features at some stage of their life cycle (Figure 2.19), they are:

1.              Presence of elongated rod like notochord below the nerve cord and above the alimentary canal. It serves as a primitive internal skeleton. It may persist throughout life in lancelets and lampreys. In adult vertebrates, it may be partially or completely replaced by backbone or vertebral column.

2.              A dorsal hollow or tubular fluid filled nerve cord lies above the notochord and below the dorsal body wall. It serves to integrate and co-ordinate the body functions. In higher chordates, the anterior end of the nerve cord gets enlarged to form the brain and the posterior part becomes the spinal cord, protected inside the vertebral column.

3.              Presence of pharyngeal gill slits or clefts in all chordates at some stage of their lifecycle. It is a series of gill slits or clefts that perforates the walls of pharynx and appears during the development of every chordate. In aquatic forms, pharyngeal gill slits are vascular, lamellar and form the gills for respiration. In terrestrial chordates, traces of non-functional gill clefts appear during embryonic developmental stages and disappear later. Besides the above said features, chordates are bilaterally symmetrical, triploblastic, coelomates with organ system level of organisation; they possess post anal tail, closed circulatory system with a ventral myogenic heart except in Amphioxus. 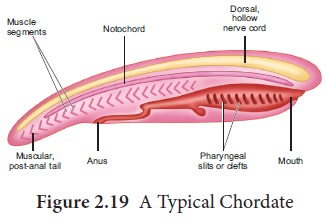 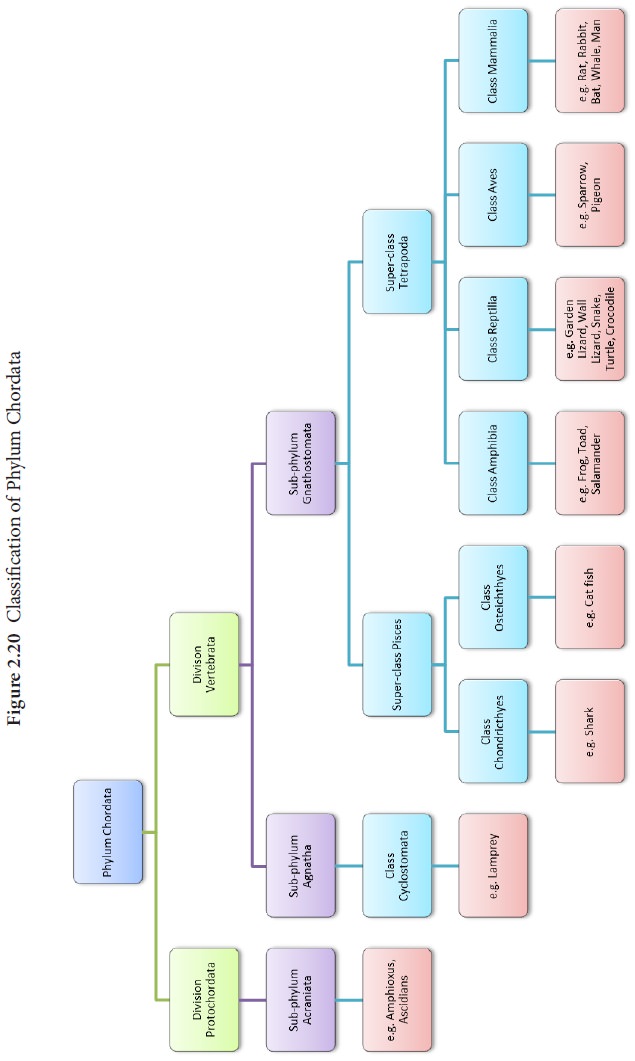 They are exclusively marine and are commonly called sea squirts. Mostly sessile, some pelagic or free swimming, exist as solitary and colonial forms. Body is unsegmented and covered by a test or tunic. Adult forms are sac like. Coelom is absent, but has an atrial cavity surrounding the pharynx. 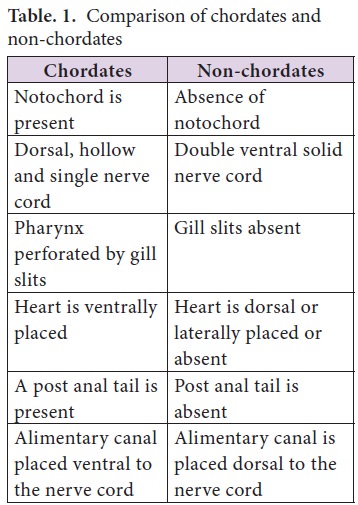 Notochord is present only in the tail region of the larval stage, hence named urochordata. Alimentary canal is complete and circulatory system is of open type. The heart is ventral and tubular. Respiration is through gill slits and clefts. Dorsal tubular nerve cord is present only in the larval stage and a single dorsal ganglion is present in the adults. Mostly hermaphrodites, development indirect and includes a free swimming tadpole larva with chordate characters Retrogressive metamorphosis is seen (Figure 2.21).

( L. Cephalo- ‘head’ ; G. chorda ‘cord’.)Cephalochordates are marine forms, found in shallow waters, leading a burrowing mode of life. They are small fish like coelomate forms with chordate characters such us notochord, dorsal tubular nerve cord and pharyngeal gill slits throughout their life. Closed type of circulatory system is seen without heart. Excretion is by protonephridia. Sexes are separate, Fertilization is external. Development is indirect and includes a free swimming larva (Figure 2.22).

Vertebrates are also called higher chordates and they possess notochord during embryonic stage only. The notochord is replaced by a cartilaginous or bony vertebral column in the adult. Hence all vertebrates are chordates but all chordates are not vertebrates. Vertebrates possess paired appendages such as fins or limbs. Skin is covered by protective skeleton comprising of scales, feathers, hairs, claws, nails, etc. Respiration is aerobic through gills, skin, buccopharyngeal cavity and lungs. Vertebrates have a ventral muscular heart with two, three or four chambers and kidneys for excretion and osmoregulation.

All members of cyclostomata are primitive, poikilothermic, jawless aquatic vertebrates and are ectoparasites on some fishes. Body is slender and eel-like bearing six to fifteen pair of gill slits for respiration. Mouth is circular without jaws and suctorial. Heart is two chambered and circulation is of closed type. No paired appendages. Cranium and vertebral column are cartilaginous. Cyclostomes are marine but migrate to fresh waters for spawning (anadromous migration). After spawning within a few days they die. The larvae (ammocoete) after metamorphosis returns to the ocean. Examples: Petromyzon (Lamprey) and Myxine (Hag fish) (Figure 2.23). 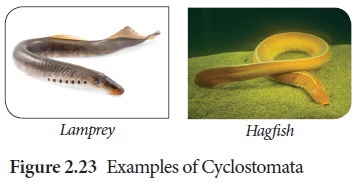 They are marine fishes with cartilaginous endoskeleton. Notochord is persistent throughout life. Skin is tough covered by dermal placoid scales and the caudal fin is heterocercal (asymmetrical both externally and internally). Mouth is located ventrally and teeth are modified placoid scales which are backwardly directed. Their jaws are very powerful and are predaceous animals. Respiration by lamelliform gills without operculum (gill cover). Excretory organs are mesonephric kidneys. Two chambered heart is present. Cartilaginous fishes are ureotelic and store urea in their blood to maintain osmotic concentration of body fluids. They are poikilothermic and viviparous. Sexes are separate. In males pelvic fins bear claspers to aid in internal fertilisation.

It includes both marine and freshwater fishes with bony endoskeleton and spindle shaped body. Skin is covered by ganoid, cycloid or ctenoid scales. Respiration is by four pairs of filamentous gills and is covered by an operculum on either side. Air bladder is present with or without a connection to the gut. It helps in gaseous exchange (lung fishes) and for maintaining buoyancy in most of the ray finned fishes.

They have a ventrally placed two chambered heart. Excretory organs are mesonephric kidneys and are ammonotelic. Presence of well developed lateral line sense organ. Sexes are separate, external fertilization is seen and most forms are oviparous (Figure 2.25). 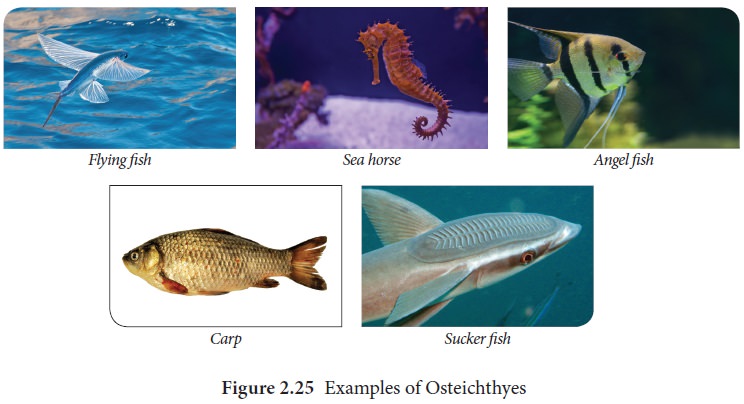 Amphibians are the first vertebrates and tetrapods to live both in aquatic as well as terrestrial habitats.They are poikilothermic. Their body is divisible into the head and trunk and most of them have two pairs of limbs; tail may or may not be present. Their skin is smooth or rough, moist, pigmented and glandular. Eyes have eyelids and the tympanum represents the ear. Respiration is by gills, lungs and through the skin. Heart is three chambered. Kidneys are mesonephric. Sexes are separate and fertilization is external. They are oviparous and development is indirect. They show hibernation and aestivation. 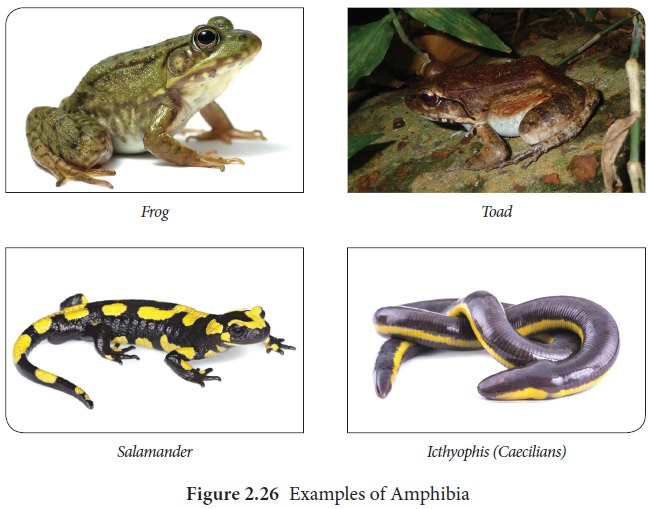 (L. repere or reptum – to creep or crawl)

They are mostly terrestrial animals and their body is covered by dry, and cornified skin with epidermal scales o scutes. Reptiles have three chambered heart but four chambered in crocodiles. All are cold blooded amniotes (poikilotherms). Most reptiles lay cleidoic eggs with extraembryonic membranes like amnion, allantois, chorion and yolk sac. Excretion by metanephric kidneys and are uricotelic. They are monoecious. Internal fertilization takes place and all are oviparous. 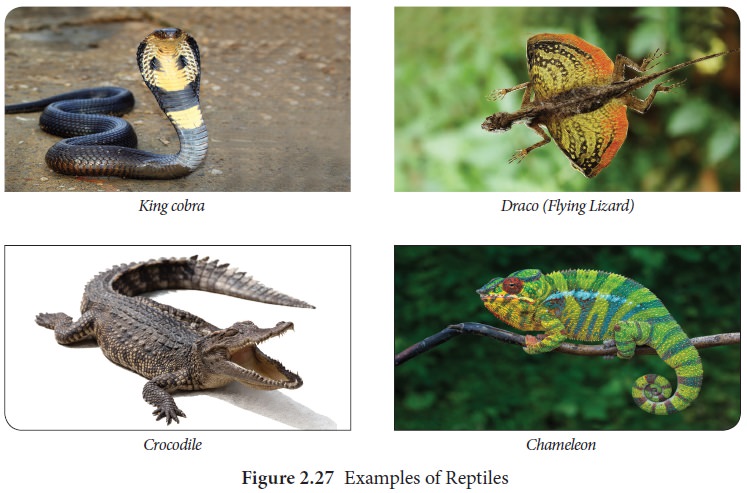 Aves are commonly known as birds. The characteristic feature of Aves is the presence of feathers and the ability to fly except for flightless birds (Eg. Ostrich, Kiwi, Penguin). The forelimbs are modified into wings, and the hind limbs are adapted for walking, running, swimming and perching. The skin is dry and devoid of glands except the oil gland or preen gland at the base of the tail. The exoskeleton consists of epidermal feathers, scales, claws on legs and the horny covering on the beak. The endoskeleton is fully ossified (bony) and the long bones are hollow with air cavities (pneumatic bones). The pectoral muscles of flight (pectoralis major and pectoralis minor) are well developed. Respirationisbycompact, elastic, spongy lungs that are continuous with air sacs to supplement respiration. The heart is four chambered. Aves are homeothermic. Migration and parental care is well marked. Urinary bladder is absent. Sexes are separate with well marked sexual dimorphism. In males, the testes are paired but in females, only the left ovary is well developed while the right ovary is atrophied. All birds are oviparous. Eggs are megalecithal and cleidoic. Fertilization is internal. 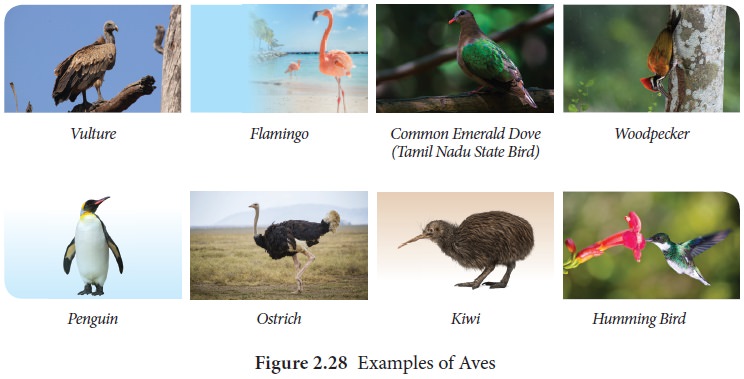 They are found in a variety of habitats. Their body is covered by hair, a unique feature of mammals. Some of them are adapted to fly or live in water. Presence of mammary glands is the most unique feature of mammals. They have two pairs of limbs adapted for walking, running, climbing, burrowing, swimming and flying. Their skin is glandular in nature, consisting of sweat glands, scent glands and sebaceous glands. Exoskeleton includes horny epidermal horns, spines, scales, claws, nails, hooves and bony dermal plates. Teeth are thecodont, heterodont and diphyodont. External ears or pinnae are present. The heart is four chambered and possess a left systematic arch. Mature RBCs are circular, biconcave and non nucleated. Mammals have a large brain when compared to other animals They show greatest intelligence among all animals. Their kidneys are metanephric and are ureotelic. All are homeothermic, sexes are separate and fertilization is internal.