Home | | Modern Pharmacology with Clinical Applications | Pharmacodynamic Actions of Norepinephrine, Epinephrine, and Isoproterenol
Posted On :  23.12.2017 04:23 am 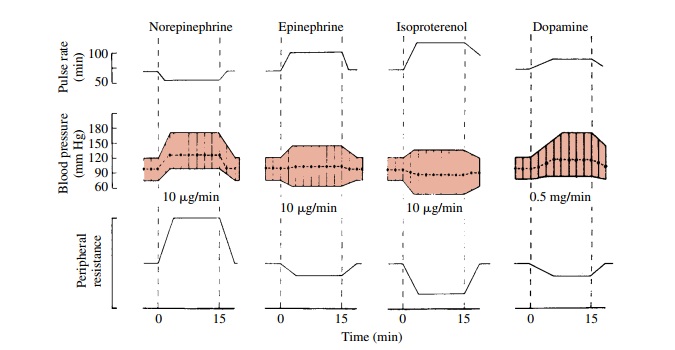 The cardiovascular effects of norepinephrine, epineph-rine, and isoproterenol .

The cardiovascular effects of norepinephrine, epineph-rine, and isoproterenol are shown in Table 10.1. Differences in the action of these three catecholamines on various vascular beds are due both to the different affinities possessed by the catecholamines for α- and β-adrenoceptors and to differences in the relative dis-tribution of the receptors in a particular vascular bed. The hemodynamic responses of the major vascular beds to these amines are shown in Table 10.2.

The blood vessels of the skin and mucous mem-branes predominantly contain α-adrenoceptors. Both epinephrine and norepinephrine produce a powerful constriction in these tissues, substantially reducing blood flow through them. Isoproterenol, which is almost a pure β -adrenoceptor agonist, has little effect on the vasculature of the skin and mucous membranes. The blood vessels in visceral organs, including the kidneys, contain predominantly α-adrenoceptors, although some β 2-adrenoceptors are also present. Consequently, epi-nephrine and norepinephrine cause vasoconstriction and reduced blood flow through the kidneys and other visceral organs. Isoproterenol produces either no effect or weak vasodilation.

Epinephrine has a more complex action on these blood vessels because of its high affinity for both α- and β 2-adrenoceptors. Whether epinephrine produces vasodilation or vasoconstriction in skeletal muscle depends on the dose administered. Low doses of epinephrine will dilate the blood vessels; larger doses will constrict them.

Although several factors can influence the flow of blood through the coronary vessels, the most important of these is the local production of vasodilator metabolites that results from stimulation-induced increased work by the heart. α-Adrenoreceptors and β -adrenoceptors in the coronary vascular beds do not play a major role in determining the vasodilator effects of the administra-tion of epinephrine or norepinephrine.

Effects on the Intact Cardiovascular System

An increase in sympathetic tone constricts blood vessels in most vascular beds and therefore causes a net increase in total peripheral resistance. Increased sympa-thetic tone increases neural release of norepinephrine and its interaction both with β-adrenoceptors on car-diac cells and with α-adrenoceptors on vascular smooth muscle cells. As a consequence, the systolic and diastolic blood pressures are elevated. It follows that the mean arterial blood pressure must also be increased.

Norepinephrine, administered to a normotensive adult either subcutaneously or by slow intravenous in-jection, constricts most blood vessels. Venules as well as arterioles are constricted. As a consequence, there is a net increase in the total peripheral resistance.

The net effect of norepinephrine administration on heart rate and ventricular contractile force therefore varies with the dose of norepinephrine, the physical ac-tivity of the subject, any prior cardiovascular and baro-receptor pathology, and the presence of other drugs that may alter reflexes.

The reflex nature of the bradycardia induced by parenterally administered norepinephrine can readily be demonstrated by administration of atropine, a choli-noreceptor antagonist. Atropine abolishes the com-pensatory vagal reflexes. Under conditions of vagal blockade, the direct cardiac stimulatory effects of nor-epinephrine are unmasked. There is marked tachycar-dia, an increase in stroke volume, and as a consequence, a marked increase in cardiac output (Fig. 10.4). 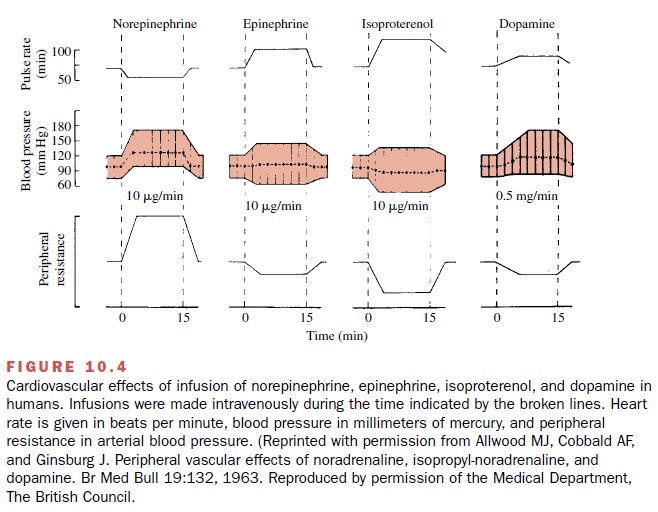 A small dose of epinephrine causes a fall in mean and diastolic pressure with little or no effect on systolic pressure. This is due to the net decrease in total periph-eral resistance that results from the predominance of vasodilation in the skeletal muscle vascular bed. The in-travenous infusion or subcutaneous administration of epinephrine in the range of doses used in humans gen-erally increases the systolic pressure, but the diastolic pressure is decreased. Therefore, the mean pressure may decrease, remain unchanged, or increase slightly, depending on the balance between the rise in systolic and fall in diastolic blood pressures (Fig. 10.4).

The cardiac effects of epinephrine are due to its ac-tion on β-adrenoceptors in the heart. The rate and con-tractile force of the heart are increased; consequently, cardiac output is markedly increased. Because total pe-ripheral resistance is decreased, the increase in cardiac output is largely responsible for the increase in systolic pressure. Since epinephrine causes little change in the mean arterial blood pressure, reflex slowing of the heart is usually not seen in humans.

Slow intravenous infusion of therapeutic doses of isoproterenol in humans produces a marked decrease in total peripheral resistance, owing to the predominance of vasodilation in skeletal muscle vascular beds. As a consequence, diastolic and mean blood pressures fall (Fig. 10.4). The depressor action of isoproterenol is more pronounced than that of epinephrine because isopro-terenol causes no vasoconstriction, whereas epinephrine does in some vascular beds. Systolic blood pressure may remain unchanged or may increase. When an increase in systolic blood pressure is seen, it is due to the marked in-crease in cardiac output produced by isoproterenol.

Isoproterenol usually increases the heart rate and stroke volume more than does epinephrine. This is partly due to its ability to decrease mean blood pres-sure, which then reflexively diminishes vagal activity, and partly to its action on the heart.

Postjunctional α1-adrenoceptors are always found in veins, arteries, and arterioles. Activation of these receptors results in the entry of extracellular calcium through receptor-operated channels and in the release of intra-cellularly stored calcium; this is brought about through the participation of the inositol triphosphate second- messenger system. This system plays an important role in the regulation of blood pressure and vascular tone.

Vascular endothelium also plays an important role in maintaining vascular tone.The endothelium can modulate both vasodilation and vasoconstriction through its ability to locally synthesize and release vasodilators such as nitric oxide, endothelium-derived hyperpolarizing factor, and PGI2, and vasoconstrictors such as endothelin, which in turn directly affect vascular smooth muscle activity. Stimulation of α2-adrenoceptors located on the endothe-lial cells in certain vascular beds (such as the coronary ar-tery) results in the release of nitric oxide and vasodilation.

In any blood vessel, the final integrated response to either neuronally released norepinephrine or to circu-lating epinephrine probably depends on the relative participation of at least four populations of α-adrenoceptors: postjunctional α 1- and α 2-adrenoceptors medi-ate constriction of vascular smooth muscle, while pre-junctional and endothelial α 2-adrenoceptors mediate vasodilation. An understanding of the vessel vascular response to adrenomimetic drugs also must include the effects of drugs on adventitial innervation, smooth mus-cle, and other vascular factors that may be present.

In general, the responses to administered catechol-amines are similar to those seen after sympathetic nerve stimulation and depend on the type of adrenoceptor in the muscle.

The radial (dilator) muscle of the iris contains α- adrenoceptors. Epinephrine and norepinephrine cause dilation of the pupil (mydriasis) by contracting the dila-tor muscle.

Uterine muscle contains both α- and β-adrenocep-tors, which mediate contraction and relaxation, respec-tively. The response of the human uterus to cate-cholamines is variable and depends on the endocrine balance of the individual at the time of amine adminis-tration . During the last stage of preg-nancy and during parturition, epinephrine inhibits the uterine muscle, as does isoproterenol; norepinephrine contracts the uterus.

Epinephrine, in therapeutic doses, mildly stimulates the CNS. The most noticeable features of this stimulation are apprehension, restlessness, and increased respira-tion. In therapeutic doses both isoproterenol and nor-epinephrine also have minor CNS stimulant properties. Since these compounds do not easily cross the blood-brain barrier, the mechanism of their stimulatory effects is not clear. It is likely that the stimulating effects are primarily, if not entirely, due to actions in the periphery that alter the neural input to the CNS.

The catecholamines, primarily epinephrine and isopro-terenol, exert a number of important effects on meta- bolic processes. Most of these are mediated through an interaction with β-adrenoceptors. Norepinephrine is usually effective only in large doses. Epinephrine and isoproterenol in therapeutic doses increase oxygen con-sumption by 20 to 30%. Endogenous epinephrine se-creted by the adrenal medulla in response to stress such as exercise increases blood levels of glucose, lactic acid, and free fatty acids.

Epinephrine, the most potent stimulant of hepatic glycogenolysis, gives rise to glucose, which readily en-ters the circulation; isoproterenol produces relatively weak hyperglycemia. Administration of  both α- and β-adrenoceptor blocking agents is necessary for com-plete antagonism of glycogenolysis in this tissue.

The release of free fatty acids from adipose tissue (lipolysis) is mediated through β3-adrenoceptors. Iso-proterenol is the most potent agonist, followed by epi-nephrine and norepinephrine.