Many adrenomimetic drugs produce responses by inter-acting with the adrenoceptors on sympathetic effector cells.

Many other adrenomimetic drugs, such as ampheta-mine, do not themselves interact with adrenoceptors, yet they produce sympathetic effects by releasing norepi-nephrine from neuronal storage sites (vesicles). The norepinephrine that is released by these compounds interacts with the receptors on the effector cells. These adrenomimetics are called indirectly acting adreno-mimetic drugs. The effects elicited by indirectly acting drugs resemble those produced by norepinephrine.

An important characteristic of indirectly acting adrenomimetic drugs is that repeated injections or pro-longed infusion can lead to tachyphylaxis (gradually di-minished responses to repeated administration). This is a result of a gradually diminishing availability of re-leasable norepinephrine stores on repeated drug ad-ministration. The time frame of the tachyphylaxis will vary with individual agents.

The actions of many indirectly acting adreno-mimetic drugs are reduced or abolished by the prior ad-ministration of either cocaine or tricyclic antidepressant drugs (e.g., imipramine). These compounds can block the adrenergic neuronal transport system and thereby prevent the indirectly acting drug from being taken up into the nerve and reaching the norepinephrine storage vesicles. Lipophilic drugs (e.g., amphetamine), however, can enter nerves by diffusion and do not need mem-brane transport systems.

Destruction or surgical interruption of the adrener-gic nerves leading to an effector tissue renders indirectly acting adrenomimetic drugs ineffective because neu-ronal norepinephrine is no longer available for release since the nerves have degenerated. Also, patients being treated for hypertension with reserpine or guanethidine, which deplete the norepinephrine stores in adrenergic neurons , respond poorly to administra-tion of indirectly acting adrenomimetic drugs.

Some adrenomimetic drugs act both directly and in-directly; that is, they release some norepinephrine from storage sites and also directly activate tissue receptors. Such drugs are called mixed-action adrenomimetics. However, most therapeutically important adreno-mimetic drugs in humans act either directly or indirectly.

The nature of the substitutions made on the basic phenylethylamine skeleton at the para and meta positions of the benzene ring or on the -carbon of the side chain determine whether an adrenomimetic drug will act di-rectly or indirectly. Directly acting adrenomimetic drugs, which have two or more carbon atoms (e.g., isopro-terenol) added to their amino group, are virtually pure β-adrenoceptor agonists. Directly acting drugs, which have only small substitutions on their amino groups (e.g., nor-epinephrine and epinephrine), are usually β-adrenocep-tor agonists, but may be α-adrenoceptor agonists as well. Norepinephrine has very weak actions on β2-adrenocep-tors but strong β1-adrenoceptor actions. Epinephrine has a high affinity for both β1- and β2-adrenoceptors.

Adrenomimetic drugs with no substitutions on their benzene ring (e.g., amphetamine and ephedrine) are generally quite lipid soluble, readily cross the blood-brain barrier, and can cause central nervous system (CNS) stimulation.

The structure of a particular adrenomimetic drug will influence its susceptibility to metabolism by catechol-O-methyltransferase (COMT) and monoamine oxidase (MAO). The actions of COMT are specific for the cate-chol structure. If either the meta or para hydroxyl group is absent, COMT will not metabolize the drug. The pres-ence of a substitution, such as a methyl group, on the - carbon of the side chain reduces the affinity of the adrenomimetic drug for MAO. Also, drugs with a large substitution on the terminal nitrogen will not be de-graded by MAO. A noncatecholamine that has a methyl group attached to its -carbon will not be metabolized by either enzyme and will have a greatly prolonged du-ration of action (e.g., amphetamine).

The Role of Second Messengers in Receptor-mediated Responses

The adrenomimetic drugs, including the naturally oc-curring catecholamines, initiate their responses by com-bining with α-, β-, or dopamine adrenoceptors. This in-teraction triggers a series of biochemical events starting within the effector cell membrane that eventually cul-minates in the production of a physiological response, for example contraction, secretion, relaxation, or al-tered metabolism. The total process of converting the action of an external signal (e.g., norepinephrine inter-acting with its receptor) to a physiological response (e.g., vascular smooth muscle contraction) is called sig-nal transduction.

Following the binding of the agonist (the first mes-senger) to its appropriate receptor on the external sur-face of the effector cell, a second messenger is generated (or synthesized) and participates in a particular series of biochemical reactions that ultimately result in the gen-eration of a specific physiological response by that cell (Figs. 10.2 and 10.3). For both α- and β-adrenoceptors, the signal transduction process seems to involve the participation of G proteins . 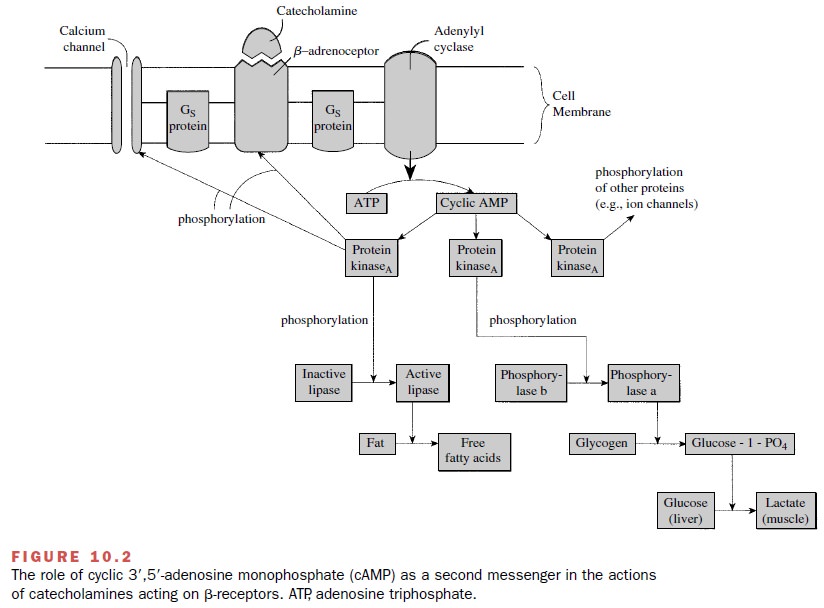 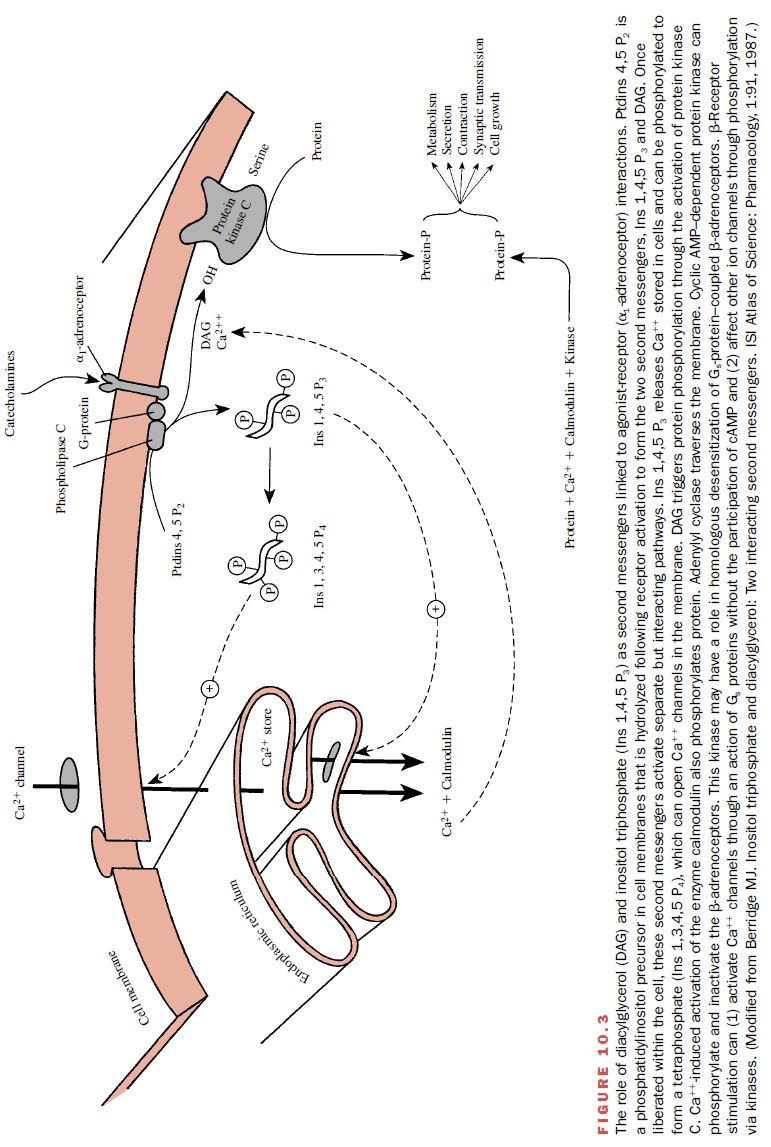 For example, inositol triphosphate functions by mobilizing calcium from intracellular stores or opening channels; the calcium can be used to initi-ate vascular smooth muscle contraction, probably through a protein phosphorylation pathway (Fig. 10.3). Diacylglycerol is known to stimulate an enzyme, protein kinase C, that phosphorylates specific intracellular pro-teins, some of which regulate ionic mechanisms such as the NA+ /H+ exchanger and potassium channels.

The basic features of the signaling system found in different cells are remarkably similar. It appears that protein phosphorylation is a final common pathway in the molecular mechanisms through which neurotrans-mitters, hormones, and the nerve impulse produce many of their biological effects in target cells.