To function adaptively means to behave in such a way that one’s attitudes and actions are well matched to the demands and con-straints of the external environment and that one’s sense of inter-nal discomfort or distress is minimized.

To function adaptively means to behave in such a way that one’s attitudes and actions are well matched to the demands and con-straints of the external environment and that one’s sense of inter-nal discomfort or distress is minimized. Therefore, by definition, the ability to adapt depends both on the individual’s behavioral repertoire and on the external environment. A person’s capacity for adaptive functioning is so crucial that it has been studied in situations ranging from adaptation to long-term missions in outer space (Eksuzian, 1999) to the self-management of life-threaten-ing illnesses such as chronic heart failure (Buetow et al., 2001).

An individual’s personality style has a great influence on his or her behavior and adaptive functioning. Personality is shaped from a blend of inborn temperament, genetic strengths and vulnerabilities, and the impact of positive and negative life experiences. Psychiatry is moving toward an improved understanding of human behavior that focuses on the ways that these factors interact with one another.

There is evidence of striking variation among neonates in their capacity to tolerate frustration, which reflects their inborn temperaments (Thomas et al., 1963). Such individual differences in temperament form the biological substrate that interacts with early development. Temperament affects the degree to which different infants are susceptible to distress as well as their variations in attachment style (Rothbart and Ahadi, 1994).

Genetic factors of various types also play a role in develop-ment, particularly when they interact with environmental factors. In general, genetic factors account for between 30 and 60% of the variance in adult personality traits (Carey and DiLalla, 1994).

Life experiences also have an impact on an individual and affect her or his behavior for better or worse. Considering whether particular experiences are the result of fate in contrast to whether they are partially brought about by the person’s own actions can be important in thinking about their impact and meaning.

While psychiatrists have long suspected links between early life experiences, especially traumatic ones, and adult psychopathology, these connections are just now being clearly, empirically demonstrated. For example, in one recent study, childhood verbal abuse conferred an increased likelihood of borderline, narcissistic, paranoid, schizoid and schizotypal per-sonality disorder during adolescence which was independent of other facts like temperament, physical and sexual abuse, use of corporal punishment, parental psychopathology and cooccuring psychiatric disorders (Johnson et al., 2001). Further, as the rela-tionships between genetic propensities expressed as temperament or personality factors and environmental influences have been explicated, some fascinating interactions have emerged. For ex-ample, one recent study suggested that high levels of the person-ality trait of sensation seeking, which appears to be genetically mediated, might result in a high incidence of adverse life events that would in turn help to precipitate depression (Farmer et al., 2001) Further, exploration of patterns of disease and personality factors is beginning to shape genetic investigations by serving as guides for genetic linkage studies (Nigg and Goldsmith, 1998). For instance, in one study, twins and siblings who were highly concordant and discordant for neuroticism, a personality factor, were examined for evidence of anxiety and depression. Tissue samples were collected to look for areas of genetic overlap and thus to identify potential foci on chromosomes that warranted further exploration (Kirk et al., 2000).

Personality styles have been described in a variety of ways with use of different models of normal personality varia-tion. These models are either categorical or dimensional in na-ture. In a categorical model, a person is described as meeting or not meeting the criteria for various diagnostic categories. In a dimensional model of personality, a person is evaluated in terms of the blend of various traits or factors he or she pos-sesses, measured on a continuum. In general, as a person moves toward the extreme end of a given continuum in the dimensional model, she or he becomes more likely to meet the criteria for a categorical diagnosis. Some dimensional models set a threshold beyond which a given characteristic is likely to be a problem or pathological.

The categorical model is a more common approach to diag-nosis within clinical psychiatry and within medicine in general. It now seems clear that useful information is gained from both categorical and dimensional approaches to examining personal-ity. Thus, although personality disorders as outlined in the Diag-nostic and Statistical Manual of Mental Disorders, Fourth Edi-tion (DSM-IV-TR) (American Psychiatric Association, 1994) are currently cast in categorical terms, Oldham and Skodol (2000), among others, have suggested that elements of both categorical and dimensional systems be included when revisions are made in DSM-V. Others have proposed a prototype-matching approach to diagnosing personality disorders in which models of various per-sonality styles are constructed and psychiatrists make diagnosis by matching their patient to the best available prototype (Westen and Shedler, 2000).

A continuum model such as this one acknowledges that whereas too much of a good thing may constitute a disorder, everyone’s personality consists of traits that can be adaptive or maladaptive. The quantity rather than the quality of a given trait 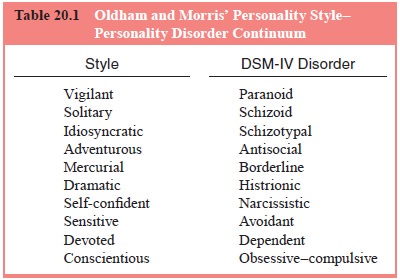 is often what makes it a problem or adaptive. Similarly, flexibility and variability are important determinants of a person’s adaptive capacity.

A second dimensional model of personality is Cloninger’s seven-factor model of temperament and character (Cloninger, 1987; Cloninger et al., 1993) (Table 20.3). In this model, a pa-tient’s behavior is evaluated on seven separate dimensions. Four of the seven dimensions are related to temperament and have been shown to be independently heritable, manifested early in life, and involved in early perceptual memory and habit formation 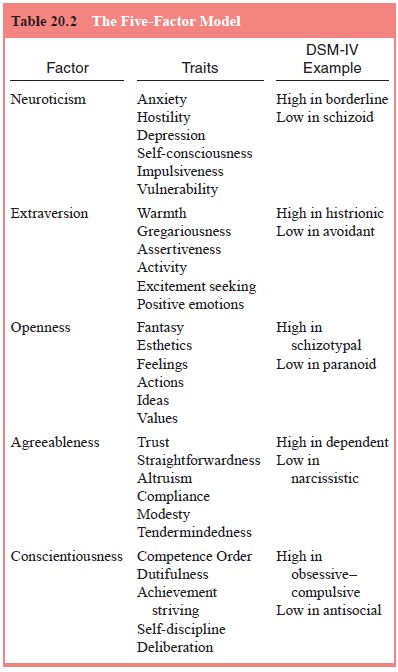 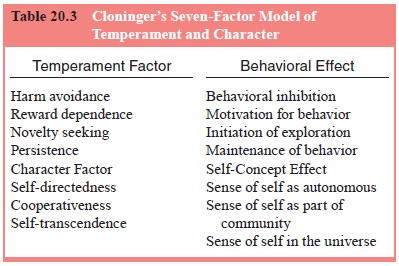 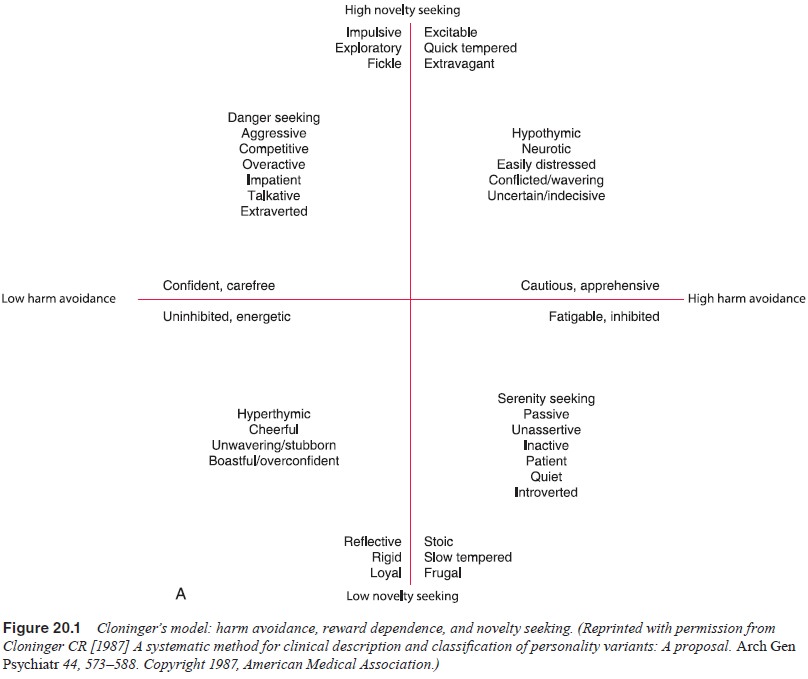 These four dimensions include novelty seeking, harm avoidance, reward dependence and persistence. Figure 20.1 is a schematic representation of Cloninger’s model.

Cloninger also describes three dimensions of character, namely, self-directedness, cooperativeness, and self-transcen-dence. The blend of these three characteristics that an individual possesses helps to determine self-concept, such as whether the individual identifies himself or herself as an autonomous individ-ual, as an integral part of humanity, and as a part of the universe as a whole. Those with low degrees of self-directedness and low degrees of cooperativeness are more likely to have personality disorders (Svrakic et al., 1993).

A third dimensional model of personality is the biogenic spectrum model of Siever and Davis (1991). This model pro-poses that certain personality styles and disorders are associ-ated with and are characterological variants of various Axis I disorders. Thus, personality disorders are not extreme variants of normal but are characterological variants of Axis I disor-ders. The biogenic spectrum model may be useful in guiding treatment, such as using anxiolytics to treat avoidant personal-ity disorder because it is considered to be on a spectrum with Axis I anxiety disorders. There is growing evidence that the biogenic spectrum model is useful for at least some Axis I/Axis II disorders. One example is the link between schizophrenia and schizotypal personality disorder in which those with the Axis II disorder demonstrate a better capacity for buffering in certain frontal brain regions as shown by functional imaging as compared with those with the full-blown Axis I disorder (Kir-rane and Siever, 2000). Table 20.4 presents details of the bio-genic model