Assessing Behavior and Adaptive Functioning in the Clinical Interview

Finding out about a patient’s personality style, level of adaptive functioning and usual patterns of behavior is one of the major tasks of the psychiatric interview.

Assessing Behavior and Adaptive Functioning in the Clinical Interview

Finding out about a patient’s personality style, level of adaptive functioning and usual patterns of behavior is one of the major tasks of the psychiatric interview. A psychiatrist gains important infor-mation from what a patient and those people close to the patient say about her or his behavior. However, a psychiatrist also gains invaluable information by closely observing the person during the interview itself. Whether the psychiatrist is quickly sizing up an agitated patient during a psychiatric emergency or carefully noticing how a patient shifts in the chair during a psychotherapy session, the ability to observe a patient’s behavior is one of a psy-chiatrist’s most important tools. A patient’s appearance, attitude and motor behaviors during an interaction with the psychiatrist provide important clues to personality, capacity for interpersonal interactions and potentially problematic behavior patterns

Observing a patient’s appearance includes making a judgment about the overall physical impression of the person reflected by grooming, clothing, poise and posture. The ability to appear well-kempt is impaired in many psychiatric disorders, ranging from the psychotic patient who appears disheveled after being up for several nights to the depressed patient dressed in dark, som-ber tones and slumped in the chair. Clothing often reveals aspectsof personality; patients with extroverted, histrionic, or dramatic personalities often wear brightly colored, unusual clothes and are often garishly made up. Problems with appearance can suggest the possibility of other functional impairments as well. The mo-tivation and degree of volitional control over appearance must usually be inferred. At times, appearance may provide an impor-tant clue of an inconsistency in a patient’s verbal presentation and suggest a serious behavior problem.

The interviewer can also detect a patient’s attitude and willing-ness to cooperate during an examination. Attitude and coopera-tion are related but not identical concepts; a paranoid patient may have a suspicious attitude but may cooperate by answer-ing the interviewer’s questions nonetheless. Often, however, a person’s attitude and ability to cooperate are both affected by psychiatric illness. Patients may be friendly or hostile, seduc-tive, defensive, or apathetic. During the psychiatric interview, they may seem attentive or disinterested and be frank or eva-sive and guarded. Again, each of these attitudes and the degree of cooperation a patient exhibits can depend on the underlying psychiatric state or can reflect a conscious manipulation on the part of the patient for the sake of achieving a desired goal. At-titude and degree of cooperativeness with an interviewer yield data about a patient’s capacity to establish rapport and relate to others, thereby suggesting the person’s general level of interper-sonal functioning.

The astute examiner can also observe motor behaviors that pro-vide clues to a patient’s internal state. First, the overall level of ac-tivity should be noted. Behavioral activity is often quantitatively increased in patients with mania or anxiety disorders, whereas it may be decreased in those with depression or intoxication. In addition, impulsivity can sometimes be revealed by motor behav-iors, as when a person pounds on a wall or hurls an object. Mo-tor behavior can also provide clues to personality; the dramatic patient often gesticulates freely during conversation, whereas the obsessive patient often conveys a sense of constricted facial movements and gestures. The types of behaviors associated with overactivity may include restlessness, pacing, handwringing, or other forms of agitation. In contrast, psychomotor retardation is a slowing of the usual body movements. A depressed patient with psychomotor slowing may be observed sitting perfectly still, staring into space. Similarly, patients with underlying neurologi-cal disorders such as Parkinson’s disease or those who are taking medicines that produce parkinsonism may exhibit motor slowing in the form of lack of facial expressiveness and loss of the body movements and gestures that often accompany speech.

Another clinically relevant way of approaching the task of assessing a patient’s behavior was suggested by Halleck (1994). He suggested that in addition to focusing on appearance, atti-tude and cooperation in the clinical evaluation, the interviewer can assess 1) the patient’s physical and emotional attractiveness; 2) his or her means of seeking control and whether control is a central issue; and 3) the degree to which the patient is dependent, passive, aggressive, attention seeking, private, or exploitative in his or her behaviors. Although patients with different styles have different motives for and various ways of expressing these types of behaviors, examining their behavior in each of these catego-ries is likely to provide a productive additional approach to evalu-ating behavior and adaptive functioning.

Problematic patterns of behavior, such as impulsivity, compulsiv-ity and avoidance, cut across diagnostic groups; looking for these patterns can be a fruitful way of characterizing aspects of mal-adaptive functioning. Each of these three patterns can arise from a wide array of psychiatric problems. For example, intoxicated people are often disinhibited and impulsive, acting in ways that they would not act if they were sober. However, a manic patient may also be impulsive, often spending money freely or engaging in sexual activity without considering the consequences of these actions. Labeling each of these patterns of behavior impulsive is an important first step in reaching a diagnosis. In addition, finding one type of impulsive behavior should prompt the psy-chiatrist to look for others and to predict that the patient may act impulsively in the future.

Impulsive behaviors are actions that arise without much delay between the formation of an idea or desire and its gratification in action. Not all impulsive behavior is pathological; in a muted and well-modulated form, impulsivity is closer to spontaneity. Certain personality styles, such as dramatic characters, are more likely to be spontaneous or impulsive than others. In contrast, a person with a conscientious style might decide to think about the purchase for a few days, then return to buy the necklace only to find it gone.

However, in its more extreme forms, impulsivity is often pathological. A number of behaviors that seem dissimilar may have impulsivity as the common and uniting thread. Another advantage of thinking about impulsivity as a distinct pattern of 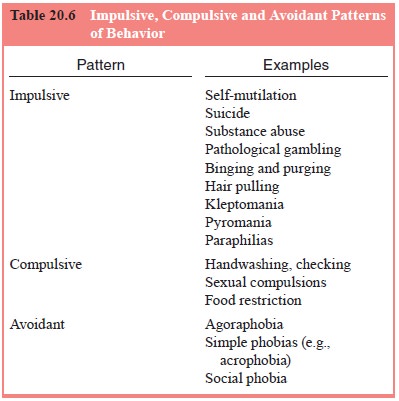 problem behavior is that impulsivity in one sphere is often ac-companied by impulsive behaviors in other arenas.

Behaviors that are frequently impulsive in nature include self-mutilation and suicide, substance abuse, pathological gam-bling, binging and purging eating behaviors, and hair pulling. In addition, urges to steal (kleptomania), to set fires (pyromania), or to engage in sexually perverse or unusual behaviors (paraphilias) also result in impulsive behaviors (Table 20.6).

Different types of impulsive behaviors are often experi-enced in similar ways by patients. One hallmark of impulsive acts is that they are often preceded by a growing internal sense of tension and discomfort that is reduced by the impulsive act itself. Whether the act is hair pulling (trichotillomania) that results in baldness, or pathological gambling that has severe financial consequences, the person is likely to feel that she or he can no longer tolerate the internal tension and that giving in to the impulse will provide relief to an uncomfortable internal state

Patients with impulsive patterns of behavior also tend to underestimate the chances of being caught by a spouse or friend. In addition, the impulsive nature of the action itself may increase the odds of apprehension and punishment

Another feature common to impulsive behaviors is that they often involve a binge, an episode of engaging in a behavior that seems out of control and cannot be terminated by the patient. Often, the binge ends only when an external constraint forces the patient to abandon the action. An eating binge and the relapse of an alcoholic person are often similarly described: “Once I started eating (drinking) I couldn’t stop. I just kept on stuffing myself (ordering drinks) until I was too exhausted and sick (drunk and broke) to continue”.

It is noteworthy that impulsively binging on a substance such as alcohol sets the stage for further impulsive behaviors secondary to intoxication.

In its muted form, compulsivity can be seen as careful-ness or attention to detail. It is easy to see how such attention to detail is helpful in a variety of settings in daily life. Many jobs depend on thoroughness and a willingness to keep working until the books are balanced to the last penny. However, compul-sive behaviors become a problem when they begin to consume much more time than necessary and when they are a response to nonsensical thoughts (obsessions).

The compulsions of obsessive–compulsive disorder, food-restricting behaviors such as those found in anorexia nervosa, and compulsive sexual behavior are common types of compul-sivity (see Table 20.6). Like impulsive behaviors, compulsions share common features and are experienced in similar ways by patients. However, the driving force behind compulsive behav-iors is not the gratification of impulses, but rather the prevention or reduction of anxiety and distress.

As with impulsivity and compulsivity, avoidance in its modulated form can be positive; learning from past negative ex-periences and avoiding prior mistakes are important capacities.

Avoidant behaviors usually arise from a patient’s history of being fearful or concerned that he or she will become fearful in a given situation. Because of the past history or the perceived threat, the anxiety-provoking situation is avoided. Avoiding the situation means avoiding the fear and anxiety the situation threatens to produce

Another feature common to avoidant behaviors is that they become self-reinforcing and tend to worsen in severity over time if left untreated.

A further common feature of avoidant behaviors is their tendency to heighten anticipatory anxiety and precipitate the very reactions that a person fears.