The basic block-diagram of PMSM drive system shown in figure in this figure basic four part divided in this circuit. All part discuss in briefly in this below section.

The basic block-diagram of PMSM drive system shown in figure in this figure basic four part divided in this circuit. All part discuss in briefly in this below section. The below figure shown it is one type of closed-loop block diagram.

There are four basic component

Voltage Source Inverters are devices that convert a DC voltage to AC voltage of variable frequency and magnitude. They are very commonly used in adjustable speed drives and are characterized by a well-defined switched voltage wave form in the terminals. The ac voltage frequency can be variable or constant depends on the application. Three phase inverters consist of six power switches connected as shown in figure to dc voltage source. An inverter switches must be carefully selected based on the requirements of operation, ratings and the application. 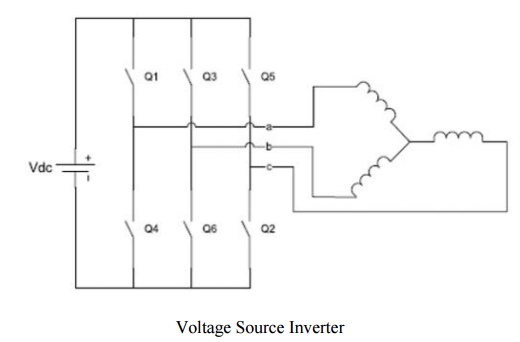 A permanent magnet synchronous motor (PMSM) is a motor that uses permanent magnets to produce the air gap magnetic field rather than using electromagnets. These motors have significant advantages, attracting the interest of researchers and industry for use in many applications. The properties of the permanent magnet material will affect directly the performance of the motor and proper knowledge is required for the selection of the materials and for understanding PM motors. Permanent magnet (PM) synchronous motors are widely used in low and mid power applications such as computer peripheral equipment’s, robotics, adjustable speed drives and electric vehicles.

The voltage source inverter requires more complexity in the current regulator but offers much higher bandwidth and elimination of current harmonics as compared to the CSI and is almost exclusively used for motion control applications. Hysteresis current controller can also be implemented to control the inverter currents. The controller will generate the reference currents with the inverter within a range which is fixed by the width of the band gap. In this controller the desired current of a given phase is summed with the negative of the measured current. The error is fed to a comparator having a hysteresis band.

When the error crosses the lower limit of the hysteresis band, the upper switch of the inverter leg is turned on but when the current attempts to become less than the upper reference band, the bottom switch is turned on. The hysteresis band with the actual current and the resulting gate signals. This controller does not have a specific switching frequency and changes continuously but it is related with the band width shown in figure. 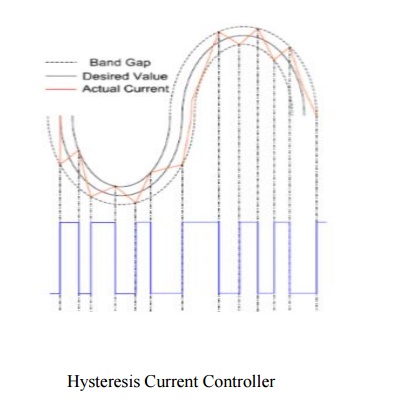 Operation of permanent magnet synchronous motors requires position sensors in the rotor shaft when operated without damper winding. The need of knowing the rotor position requires the development of devices for position measurement. There are four main devices for the measurement of position, the potentiometer, linear variable differential transformer, optical encoder and resolvers. The ones most commonly used for motors are encoders and revolvers. Depending on the application and performance desired by the motor a position sensor with the required accuracy can be selected.