Peptic Ulcer - Disorders of the Stomach 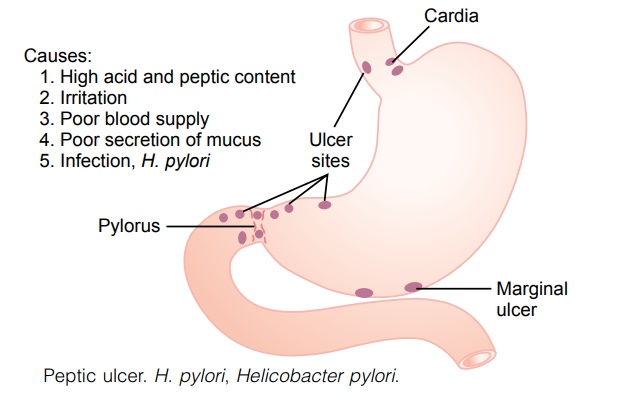 A peptic ulcer is an excoriated area of stomach or intestinal mucosa caused principally by the digestive action of gastric juice or upper small intestinal secretions.

A peptic ulcer is an excoriated area of stomach or intestinal mucosa caused principally by the digestive action of gastric juice or upper small intestinal secretions. Figure 66–1 shows the points in the gastrointestinal tract at which peptic ulcers most frequently occur, demon-strating that the most frequent site is within a few centimeters of the pylorus. In addition, peptic ulcers fre-quently occur along the lesser curvature of the antral end of the stomach or, more rarely, in the lower end of the esophagus where stomach juices frequently reflux. A type of peptic ulcer called a marginal ulcer also often occurs wherever a surgical opening such as a gastro-jejunostomy has been made between the stomach and the jejunum of the small intestine. 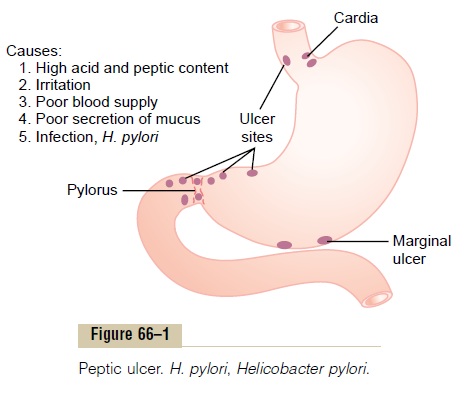 Basic Cause of Peptic Ulceration. The usual cause of pepticulceration is an imbalance between the rate of secretion of gastric juice and the degree of protection afforded by (1) the gastroduodenal mucosal barrier and (2) the neu-tralization of the gastric acid by duodenal juices. It will be recalled that all areas normally exposed to gastric juice are well supplied with mucous glands, beginning with compound mucous glands in the lower esophagus plus the mucous cell coating of the stomach mucosa, the mucous neck cells of the gastric glands, the deep pyloric glands that secrete mainly mucus, and, finally, the glands of Brunner of the upper duodenum, which secrete a highly alkaline mucus.

In addition to the mucus protection of the mucosa, the duodenum is protected by the alkalinity of the small intestinal secretions. Especially important is pancreatic secretion, which contains large quantities of sodiumbicarbonate that neutralize the hydrochloric acid of the gastric juice, thus also inactivating pepsin and prevent-ing digestion of the mucosa. In addition, large amounts of bicarbonate ions are provided in (1) the secretions of the large Brunner’s glands in the first few centimeters of the duodenal wall and (2) in bile coming from the liver.

When excess acid enters the duodenum, it reflexly inhibits gastric secretion and peristalsis in the stomach, both by nervous reflexes and by hormonal feedback from the duodenum, thereby decreasing the rate of gastric emptying.

The presence of acid in the small intestine liberates secretin from the intestinal mucosa, which thenpasses by way of the blood to the pancreas to promote rapid secretion of pancreatic juice. This juice also contains a high concentration of sodium bicarbonate, thus making still more sodium bicarbonate available for neutralization of the acid. Therefore, a peptic ulcer can be caused in either of two ways: (1) excess secretion of acid and pepsin by the gastric mucosa or (2) diminished ability of the gastro-duodenal mucosal barrier to protect against the diges-tive properties of the stomach acid–pepsin secretion.