General Disorders of the Gastrointestinal Tract

Vomiting: Vomiting is the means by which the upper gastroin-testinal tract rids itself of its contents when almost any part of the upper tract becomes excessively irritated, overdistended, or even overexcitable.

General Disorders of the Gastrointestinal Tract

Vomiting is the means by which the upper gastroin-testinal tract rids itself of its contents when almost any part of the upper tract becomes excessively irritated, overdistended, or even overexcitable. Excessive disten-tion or irritation of the duodenum provides an espe-cially strong stimulus for vomiting.

The sensory signals that initiate vomiting originate mainly from the pharynx, esophagus, stomach, and upper portions of the small intestines. And the nerve impulses are transmitted, as shown in Figure 66–2, by both vagal and sympathetic afferent nerve fibers to multiple distributed nuclei in the brain stem that all together are called the “vomiting center.” From here, motor impulses that cause the actual vomiting are trans-mitted from the vomiting center by way of the 5th, 7th, 9th, 10th, and 12th cranial nerves to the upper gastroin-testinal tract, through vagal and sympathetic nerves to the lower tract, and through spinal nerves to the diaphragm and abdominal muscles. 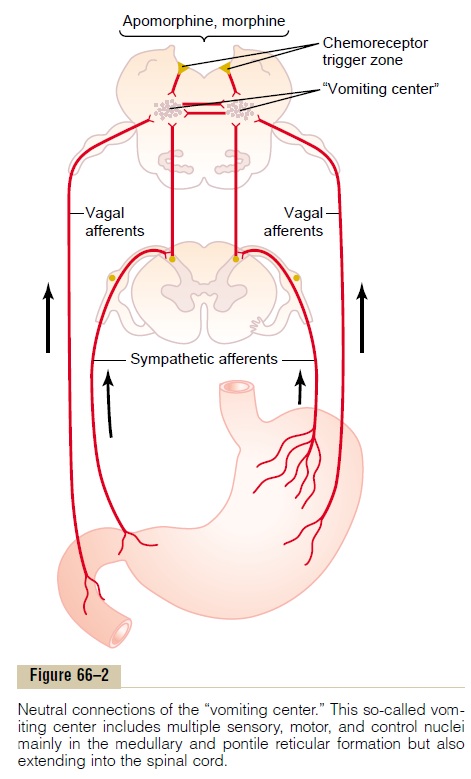 Antiperistalsis, the Prelude to Vomiting. In the early stagesof excessive gastrointestinal irritation or overdistention, antiperistalsis begins to occur often many minutesbefore vomiting appears. Antiperistalsis means peristal-sis up the digestive tract rather than downward. This may begin as far down in the intestinal tract as the ileum, and the antiperistaltic wave travels backward up the intestine at a rate of 2 to 3 cm/sec; this process can actually push a large share of the lower small intes-tine contents all the way back to the duodenum and stomach within 3 to 5 minutes. Then, as these upper portions of the gastrointestinal tract, especially the duo-denum, become overly distended, this distention becomes the exciting factor that initiates the actual vomiting act.

At the onset of vomiting, strong intrinsic contractions occur in both the duodenum and the stomach, along with partial relaxation of the esophageal-stomach sphincter, thus allowing vomitus to begin moving from the stomach into the esophagus. From here, a specific vomiting act involving the abdominal muscles takes over and expels the vomitus to the exterior.

Vomiting Act. Once the vomiting center has been suffi-ciently stimulated and the vomiting act instituted, the first effects are (1) a deep breath, (2) raising of the hyoid bone and larynx to pull the upper esophageal sphincter open, (3) closing of the glottis to prevent vomitus flow into the lungs, and (4) lifting of the soft palate to close the posterior nares. Next comes a strong downward con-traction of the diaphragm along with simultaneous con-traction of all the abdominal wall muscles. This squeezes the stomach between the diaphragm and the abdominal muscles, building the intragastric pressure to a high level. Finally, the lower esophageal sphincter relaxes completely, allowing expulsion of the gastric contents upward through the esophagus.

Thus, the vomiting act results from a squeezing action of the muscles of the abdomen associated with simulta-neous contraction of the stomach wall and opening of the esophageal sphincters so that the gastric contents can be expelled.

“Chemoreceptor Trigger Zone” in the Brain Medulla for Initiation xof Vomiting by Drugs or by Motion Sickness. Aside from thevomiting initiated by irritative stimuli in the gastroin-testinal tract itself, vomiting can also be caused by nervous signals arising in areas of the brain. This is par-ticularly true for a small area located bilaterally on the floor of the fourth ventricle called the chemoreceptortrigger zone for vomiting. Electrical stimulation of thisarea can initiate vomiting; but, more important, admin-istration of certain drugs, including apomorphine, mor-phine, and some digitalis derivatives, can directly stimulate this chemoreceptor trigger zone and initiate vomiting. Destruction of this area blocks this type of vomiting but does not block vomiting resulting from irritative stimuli in the gastrointestinal tract itself.

Also, it is well known that rapidly changing direction or rhythm of motion of the body can cause certain people to vomit. The mechanism for this is the follow-ing: The motion stimulates receptors in the vestibular labyrinth of the inner ear, and from here impulses are transmitted mainly by way of the brain stem vestibularnuclei into the cerebellum, then to thechemoreceptor trigger zone, and finally to the vomiting center to causevomiting.

The gastrointestinal tract can become obstructed at almost any point along its course, as shown in Figure 66–3. Some common causes of obstruction are (1) cancer, (2) fibrotic constriction resulting from ulceration or from peritoneal adhesions, (3) spasm of a segment of the gut, and (4) paralysis of a segment of the gut. 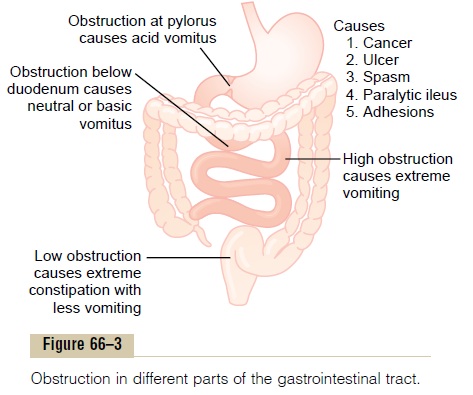 The abnormal consequences of obstruction de-pend on the point in the gastrointestinal tract that becomes obstructed. If the obstruction occurs at the pylorus, which results often from fibrotic constriction after peptic ulceration, persistent vomiting of stomach contents occurs. This depresses bodily nutrition; it also causes excessive loss of hydrogen ions from the stomach and can result in various degrees of whole-body alkalosis.

If the obstruction is beyond the stomach, antiperi-staltic reflux from the small intestine causes intestinal juices to flow backward into the stomach, and these juices are vomited along with the stomach secretions.

In this instance, the person loses large amounts of water and electrolytes, so that he or she becomes severely dehydrated, but the loss of acid from the stomach and base from the small intestine may be approximately equal, so that little change in acid-base balance occurs.

Gases in the Gastrointestinal Tract; “Flatus”

Gases, called flatus, can enter the gastrointestinal tract from three sources: (1) swallowed air, (2) gases formed in the gut as a result of bacterial action, or (3) gases that diffuse from the blood into the gastrointestinal tract. Most gases in the stomach are mixtures of nitrogen and oxygen derived from swallowed air. In the typical person these gases are expelled by belching. Only small amounts of gas normally occur in the small intestine, and much of this gas is air that passes from the stomach into the intestinal tract.

In the large intestine, most of the gases are derived from bacterial action, including especially carbondioxide, methane, and hydrogen. When methane andhydrogen become suitably mixed with oxygen, an actual explosive mixture is sometimes formed. Use of the elec-tric cautery during sigmoidoscopy has been known to cause a mild explosion.

Certain foods are known to cause greater expulsion of flatus through the anus than others—beans, cabbage, onion, cauliflower, corn, and certain irritant foods such as vinegar. Some of these foods serve as a suitable medium for gas-forming bacteria, especially unabsorbed fermentable types of carbohydrates. For instance, beans contain an indigestible carbohydrate that passes into the colon and becomes a superior food for colonic bacteria. But in other instances, excess expul-sion of gas results from irritation of the large intestine, which promotes rapid peristaltic expulsion of gases through the anus before they can be absorbed.