Pneumococci cause disease primarily by their capacity to multiply in host tissues by avoiding the host defense mechanisms.

Pneumococci cause disease primarily by their capacity to mul-tiply in host tissues by avoiding the host defense mechanisms (Table 25-1).

Capsule: Virulent strains ofS. pneumoniaehave a complexpolysaccharide capsule. The acidic and hydrophilic nature of the capsule allows the bacteria to escape phagocytosis by macrophages.

Pneumolysin: Pneumolysin is a toxin produced bypneumococci. The toxin alters the mucociliary clearance function of respiratory epithelium and inhibits phagocytic cell oxidative burst essential for intracellular killing of the bacteria. It activates the classical complement pathway resulting in the production of C3a and C5a, thereby contributing to the disease process.

IgA protease: The enzyme produced by pneumococci disruptssecretory IgA-mediated clearance of the bacteria and thereby enhances the ability of the bacteria to colonize mucosa of the upper respiratory tract. 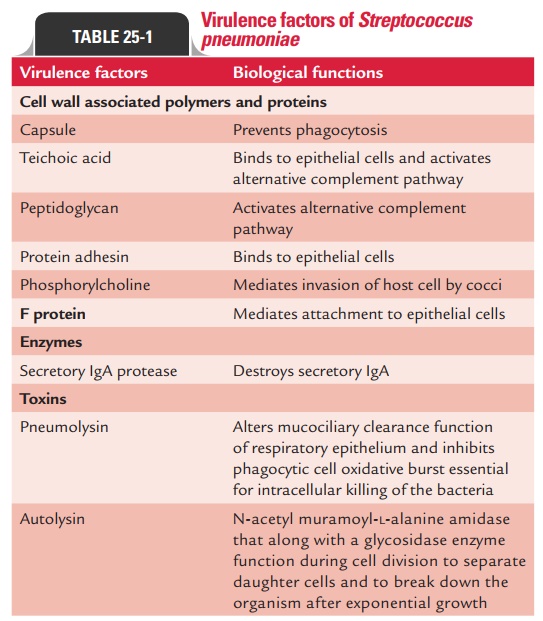 Colonization and invasion: S. pneumoniaecolonizes theoropharynx by adhering to the epithelial cells of pharynx. This adhesion is mediated by pneumococcal neuraminidase or by pneumococcal cell-surface ligands of the cocci called adhesins. The cocci also release an enzyme, secretory IgA protease, which destroys the secretory IgA and thereby enhances the ability of the cocci to colonize mucosa of the upper respiratory tract. Pneumolysin liberated by the cocci destroys the ciliated epi-thelial cells and phagocytic cells by binding to cholesterol in the epithelial cell membrane. This adversely affects mucociliary clearance function of respiratory epithelium.

Tissue destruction: The process of tissue destruction ismediated by factors, such as cell wall teichoic acid, peptidogly-can, and phosphorylcholine. The destructive action is further supplemented by hydrogen peroxide produced by the bacteria. The peptidoglycan–teichoic acid complex of the pneumococ-cus is highly inflammatory. This complex activates the alternate complement pathway producing C5a, which being chemotaxic attracts neutrophils to the site of inflammation. Migration of inflammatory cells to the site of infection is the key feature of pneumococcal infection. The activated leuko-cytes produce cytokines, such as IL-1 and TNF- , which further contribute to the migration of inflammatory cells to the site of infection, tissue damage, fever, and other manifesta-tions of pneumococcal disease. Phosphorylcholine present in the bacterial cell wall binds with phosphodiesterase-activating factors of the host endothelial cells and helps the cocci to enter the host cells.

Avoidance of opsonization and phagocytosis: The abilityto evade phagocytosis allows S. pneumoniae to survive, multi-ply, and spread to various organs. The antiphagocytic action of capsule is further supplemented by pneumolysin, which causes inhibition of phagocytic cell oxidative burst, required for intracellular killing of bacteria.

Host immunity is type specific with production of anticapsular antibodies. These antibodies appearing in serum 5–8 days after the onset of infection are protective against the pneumococ-cal serotype causing the infection. Natural immunity follows infections as well as colonization.