The cell wall of S. pneumoniae consists of the following components.

The cell wall of S. pneumoniae consists of the following components (Fig. 25-2):

·           Capsule: The polysaccharide capsule surrounds the cellwall. The capsule is essential for virulence, its role being to protect the cocci from phagocytosis.

·           Teichoic acid: The teichoic acid present in cell wall is of twotypes: (a) C polysaccharide and (b) Forssman or F antigen. 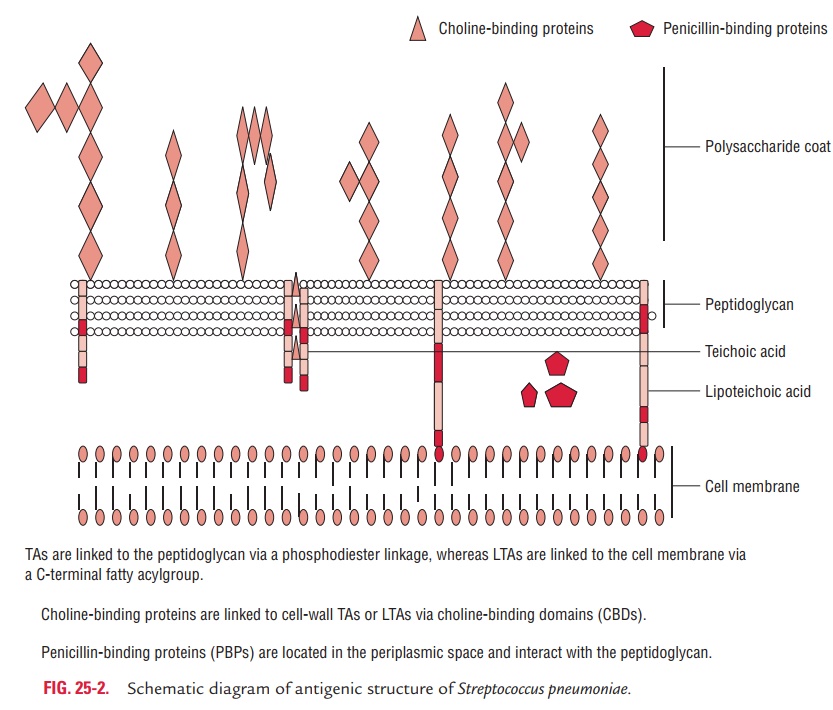 C polysaccharide: It is present on the surface of cellwall. The exposed part of teichoic acid, which is linked to peptidoglycan layer and extends through the capsule, is known as C polysaccharide or C antigen. This is a spe-cies-specific antigen and in no way related to the group-specific C carbohydrate antigen found in beta-hemolytic streptococci. The C polysaccharide present in the cell wall of pneumococci precipitates with C reactive protein (CRP), a serum globulin.

C-reactive protein: The CRP is an acute-phase substancesynthesized in the liver. It is not produced specifically against C antigen of pneumococci. It is present in low concentrations in healthy individuals, but the concen-tration increases in inflammation, malignancies, and bacterial infections. CRP increases during pneumonia and disappears during convalescence, hence can be used as a prognostic tool. CRP is used as an index of the treat-ment in rheumatic fever and certain other conditions.

F antigen: F antigen is the other type of teichoic acid, whichis covalently bound to the lipids in cytoplasmic membrane. It is so called because it cross-reacts with the Forssman sur-face antigen of the mammalian cells. F proteins mediate the binding of pneumococci to the host cell surface.

·           M protein: M protein is a type-specific protein similarto the M protein of Streptococcus pyogenes, but is immu-nologically distinct. Antibodies against M proteins are not protective, as they do not inhibit phagocytosis of pneumococci.

·           Agglutination of the bacteria with type-specific antiserum by co-agglutination (Co-A) test. The Co-A test is a rapid slide agglutination test, uses less antiserum, and is in complete agreement with Quellung test.

·           Precipitation of the specific soluble substances with specific serum by counter-current immunoelectrophoresis (CIEP). This is also a rapid test used to serotype pneumococci.

·           Capsular swelling reaction with type-specific antiserum by “Quellung reaction”. This is called capsular swelling reac-tion due to swelling (Latin quellung: swelling) of the capsule observed in this test. This reaction was first described by Neufeld in the year 1902. In this test, a drop of type-specific antiserum is added to a drop of suspension of pneumococci on a glass slide along with a drop of methylene blue solution. The capsule, in the presence of the specific homologous anti-serum, becomes apparently swollen, clearly delineated, and refractile.