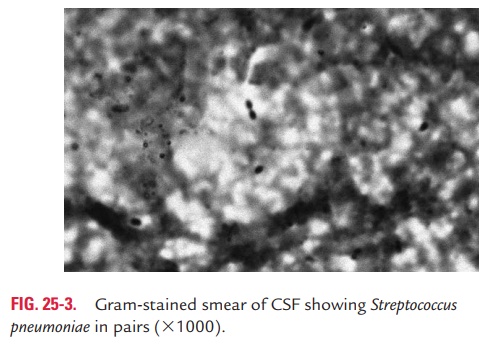 Gram staining of sputum: It is a rapid method for diagno-sis of acute pneumonia. Stained smears showing lanceolate-shaped, Gram-positive cocci in pairs surrounded by a capsule is good evidence for pneumococcal infection. The morphology of the pneumococci may be altered in the patient receiving anti-bacterial therapy.

Gram staining of a buffy coat or blood smear: It is frequentlypositive in cases of overwhelming pneumococcal sepsis and is useful for rapid presumptive diagnosis of this condition. In acute pneumococcal otitis media, Gram stain of an aspirated fluid smear from middle ear is useful to demonstrate the bacteria.

Sputum is plated on blood agar and incubated in the presence of 5–10% carbon dioxide. Gray colonies with alpha-hemolysis are observed after overnight incubation. Sputum culture may be negative due to normal flora outgrowing pneumococci or due to rapid autolysis. Diagnosis of pneumococcal meningitis is confirmed by CSF culture and is positive in 90% of untreated cases. However, the culture is negative in more than 50% of cases who have received treatment even with a single dose of antibiotics. In the acute phase of pneumonia, the blood can be cultured in glucose broth. Demonstration of the pneumococci in the blood shows bad prognosis. Culture of aspirated fluid from the middle ear or from the sinus is a definitive method for diagnosis of otitis media or sinusitis. However, culture is not recommended for specimens collected from the nasopharynx or from external ear.

Optochin sensitivity test: S. pneumoniaeis identified by itssensitivity to optochin. In this method, a filter paper disc con-taining optochin (ethylhydrocupreine dihydrochloride) is applied on the middle of blood agar plate streaked with pneumococci and is incubated overnight. A zone of inhibition of 14 mm or more is observed around the disk after overnight incubation.

Bile solubility test: This is a very useful test to identifyS. pneumoniae. It detects an autolytic enzyme, amidase, presentin pneumococci, which breaks the bond between alanine and muramic acid of the peptidoglycan of the pneumococcal cell wall. The enzyme amidase is activated by bile salts present in bile, resulting in lysis of pneumococci. The test is carried out by applying a loopful of 10% sodium deoxycholate solution on the young colonies in the blood agar. Most colonies of pneu-mococci are dissolved within a few minutes.

Animal inoculation: S. pneumoniaecan be isolated from clini-cal specimens containing few pneumococci by intraperitoneal inoculation in mice. Pneumococci are demonstrated in the peritoneal exudate and heart blood of the mice, which die 1–3 days after inoculation. 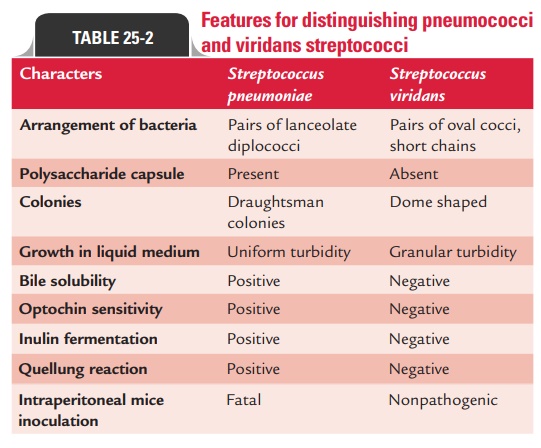 Pneumococcal antigen detection: The CIEP is a useful testto detect pneumococcal capsular polysaccharide antigen in the CSF for diagnosis of meningitis, and in the blood or urine for diagnosis of bacteremia and pneumonia. Latex agglutination test using the latex particles coated with anti-CRP antibody is employed to detect C reactive protein. The CRP is used as a prognostic marker in acute cases of acute pneumococcal pneu-monia, acute rheumatic fever, and other infectious diseases. CRP is found in sera from cases of acute pneumonia but is absent during the convalescent phase of the disease.