Leprosy is a chronic granulomatous disease exclusively of humans. Superficial peripheral nerves, skin, mucous mem-branes of the upper respiratory tract, anterior chamber of the eye, and testis are most commonly affected.

Leprosy is a chronic granulomatous disease exclusively of humans. Superficial peripheral nerves, skin, mucous mem-branes of the upper respiratory tract, anterior chamber of the eye, and testis are most commonly affected.

M. leprae is an obligate intracellular acid-fast bacillus with anaffinity for macrophages and Schwann cells. The virulence of M. lepraeis mainly due to:

·           Its capabilities for intracellular multiplication and growth and

Phenolic glycolipid-1: PGL-1 is a prominent surface lipidfound on the outermost layer of the cell wall. This lipid is specific to M. leprae and is the best-studied virulence factor of M. leprae (Table 43-1). PGL-1 binds to C3 component of the

complement, which leads to phagocytosis mediated by CR1, CR3, and CR4 receptors found on the cell surfaces. PGL-1 protects the lepra bacillus, once inside the phagocytic cells, from oxidative killing by macrophages by removing hydroxyl radicals and superoxide anions.

The pathogenesis of the disease leading to tissue dam-age caused by M. leprae infection depends on the following factors:

·           Development of immunological complications such as lepra

Leprosy is primarily transmitted by infected nasal secretions. Infections by a very large number of lepra bacilli lead to leproma-tous leprosy. A strong cell-mediated response, however, results in mild form of the disease with low bacterial load and involve-ment of only few nerves. Therefore, CMI is mainly found in mild form of disease and decreases with the severity of the disease.

Toll-like receptors (TLRs) also play important role in the pathogenesis of leprosy. TLRs, such as TLR-1 and TLR-2, are found on the surface of Schwann cells, especially in patients with tuberculoid leprosy. M. leprae activates this receptor on Schwann cells, which is suggested to be responsible for the activation of apoptosis genes and which enhances the onset of nerve damage seen in the mild disease.

A sudden increase in T-cell immunity is also responsible for type 1 reversal reactions. Activation of tumor necrosis factor-alpha and the deposition of immune complexes in tissues with neutrophilic invasion results in type 2 reaction.

Skin and peripheral nerves are commonly involved in lep-rosy. Although bacilli are also found in the liver, spleen, and bone marrow, no clinical signs of dysfunction of these visceral organs are noted.

The destructive lesions in leprosy, even in most advanced cases, are limited to the peripheral nerves, skin, and upper respiratory passages above the larynx, anterior chamber of the eye, testis, hands, and feet. Higher body temperature or sys-temic signs of toxicity are absent, although the lepra bacilli are found in the peripheral blood during the disease.

Ridley and Jopling (1966) introduced a system of classifica-tion of leprosy on the basis of clinical, histopathological, and immunological findings. This classification is used to differen-tiate types of leprosy and helps in determining the prognosis following treatment with antileprosy therapy. They classified leprosy into five groups: (a) tuberculoid (TT), (b) borderline tuberculoid (BT), (c) borderline (BB), (d) borderline leproma-tous (BL), and (e) lepromatous (LL). Lepromatous leprosy and tuberculoid leprosy are the two extreme or polar forms of the disease.

The Indian classification of leprosy—borderline tuberculoid, borderline, and borderline lepromatous—usually represents type of leprosy, which shows characteristics of both tubercu-loid and lepromatous leprosy. These lesions may progress to either lepromatous or tuberculoid type of lesions depending on the strength of immunity. The lesions heal spontaneously in about 75% of affected persons.

Purely neuritic leprosy is an additional form of leprosydescribed recently. This form is characterized by asymptomatic peripheral neuropathies without any skin lesions. These cases are negative for the bacteria.

M. leprae infection induces development of antibody-mediatedand cell-mediated immunities in the infected host. The CMI is only protective against the disease. The progression of the disease is primarily dependent on the CMI. The CMI is intact in the tubercular leprosy, whereas it is lacking or minimal in lepromatous leprosy (Fig. 43-1). The infected persons with tuberculoid leprosy show a strong delayed hypersensitivity reaction to lepromin. The macrophages phagocytose the bacilli and destroy them. 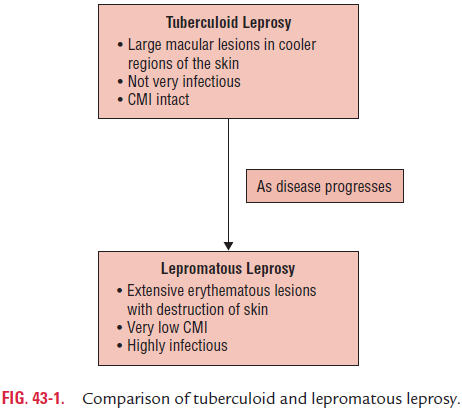 Human leukocyte antigen (HLA) class II serological typing has shown an association of tuberculoid leprosy with DR2 in Indian population. DRB1-1501 and -1502 are the predominant subtypes of DR2 associated with lepromatous leprosy. These two subtypes are implicated in presentation of pathogenic pep-tides of mycobacteria. DQ1 presentation has been suggested to be associated with an immunosuppression gene for M. leprae, since lepromatous leprosy and borderline leprosy have shown an increased frequency of DQ1.