Home | | Microbiology and Immunology | Laboratory Diagnosis for Mycobacterium leprae Infections
Posted On :  21.07.2017 08:52 am

In lepromatous leprosy, lepra bacilli are always found in large numbers in the skin and in the nose. Therefore, smears col-lected from the nasal mucosa, skin lesions, and ear lobules are the specimens of choice for microscopy. Occasionally, the spec-imens may be collected from lymph nodes and affected nerves in lepromatous leprosy. In tuberculoid leprosy, the bacilli are not found in these specimens.

Skin smears: The skin smears are collected from the leprouslesions, such as nodules, thick papules, and areas of infiltration. In cases of patches, the samples are obtained from the edge of the lesion rather than from the center. In patients with only diffuse infiltrations, skin smears are collected from five to six different sites including the skin over the ear lobes, buttocks, forehead, cheeks, and chin.

Slit and scrap method: The skin smears from these sites arecollected by slit and scrap method. In this method, the skin is pinched up and raised between the thumb and index finger of the left hand, which squeezes out blood from that part, thereby minimizing bleeding when a cut is made. Then with the help of a scalpel, a cut about 5 mm is made on the pinched skin, deep enough to get into the infiltrated layers. After wiping of blood or lymph that may have exudated, the blade of the scalpel is turned at right angle to the cut and the sides and bottom of the cut are scraped with point of the blade several times in the same direction, so that the tissue fluid and pulp but not blood are collected on one side of the blade. Obtained fluid and tis-sues are thickly spread on a slide and stained by Ziehl–Neelsen (ZN) technique.

Nasal smears: Smears from the nasal patches are collected byscraping material from the mucous membrane of the internal nasal septum, particularly from inferior turbinate folds of the nasal septum. This mucous membrane is then spread on a slide and a uniform smear is made, which is stained by ZN method as mentioned earlier.

The slit-skin smears, nasal smears, or smears from other speci-men on the slide are stained by using the ZN method and partially decolorized with 5% instead of 20% sulfuric acid. In a positive, stained smear, red-colored acid-fast bacilli are seen on examination by oil immersion lens (Fig. 43-3, Color Photo 48). The smears are graded based on the numbers of bacilli as men-tioned in Table 43-3. 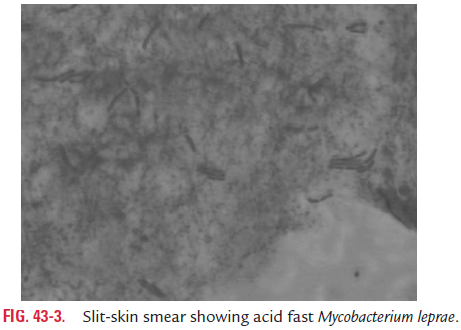 Bacillary index and morphological index are two indices, which are based on demonstration of M. leprae in smears from skin or nasal discharges. These two indices are useful for:

·           Assessing the progress of patients after treatment with chemotherapeutic agents. 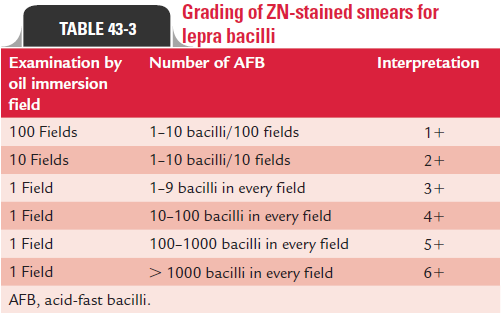 Morphological index: The uniformity of the bacilli is usedas a criterion to differentiate live bacilli from dead bacilli in stained smears. It is calculated by counting solid stained bacilli out of the total number of bacilli counted. The lepra bacilli that stain uniformly with carbol fuchsin as solid acid-fast rods are believed to be viable, and the bacilli that stain irregu-larly are considered dead and degenerated. The percentage of uniformly stained bacilli in the tissues is known as morpho-logical index (MI).

This index is a useful method for assessing the response of patients of leprosy with antileprosy agents, and is more use-ful than the bacteriological index (BI). A decrease in the MI indicates better response of the patients to chemotherapy, whereas a decrease in MI followed by an increased MI indicates poor response to chemotherapeutic agents due to development of drug resistance in the bacteria.

The lepromin test is used to study host immunity to M. leprae. The test was first described by Mitsuda in 1919. The test is an intradermal skin test performed by using lepromin antigen, which is a suspension of killed M. leprae obtained from infected human or armadillo tissue.

Antigen: Originally, crude antigen obtained from humanlepromatous tissue rich in M. leprae was used as antigen. This antigen was first prepared by Mitsuda in 1919 by using anti-gens extracted from skin lesions of lepromatous patients. This antigen known as standard Mitsuda lepromin con-tains 4.0 107M. leprae per mL, which have a shelf life of 2 years when stored at 4°C. Recently, the standard lepro-min antigen is being prepared from armadillo derived lepra bacilli (Lepromin A) by replacing human derived lepra bacilli (Lepromin H).

Dharmender’s antigen: Bacillary lepromin is another type ofantigen, which contains more of bacillary components and less of tissue components. Dharmender’s antigen is an exam-ple of such antigen. This antigen was first prepared by Indian scientist Dharmender by separating the bacilli from finely ground lepromatous tissue and treating with chloroform. The suspension is then evaporated to make it dry and then washed with ether to remove the lipids. The antigen, finally, is reconstituted in phenol saline for use. However, more recently, soluble antigens from M. leprae have also been used as antigens in the skin test.

Test: Lepromin skin test is performed by intradermal injectionof lepromin antigen into the forearm. Two types of reactions are observed after the test. First, early or Fernandez reaction and second, late or Mitsuda reaction.

Early or Fernandez reaction is observed after 48 hours ofinjection. Positive reaction is characterized by the appearance of a localized area of inflammation with congestion and edema measuring 10 mm and more in diameter during 24–48 hours of injection. These lesions disappear within 3–4 days. The positive Fernandez reaction, like tuberculin reaction indicates delayed type of hypersensitivity to antigens of M. leprae or mycobacteria that cross-react with M. leprae. Positive reaction suggests that the patient has been infected by leprae bacilli during sometime in the past.

Late or Mitsuda reaction is characterized by development of anodule at the site of inoculation after 3–4 weeks of injection (Fig. 43-4). The nodule subsequently may undergo necrosis followed by ulceration. The ulcer takes several weeks to heal. Positive Mitsuda reaction is the manifestation of CMI, which indicates that the immune system is capable of inducing an efficient cell-mediated response. This Mitsuda reaction is positive in tuberculoid leprosy. 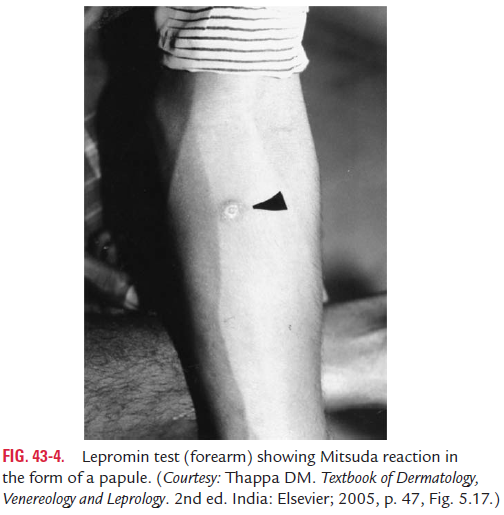 The lepromin test is not used to confirm the diagnosis of leprosy. It is also not useful to indicate prior contact of the person with leprae bacilli. Healthy people residing in areas non-endemic for leprosy with no chance of contact with the bacilli may show a positive lepromin reaction.