B. pertussis colonizes the cilia of mammalian respiratory epithelium.

B. pertussis colonizes the cilia of mammalian respiratory epithelium. The organism usually does not invade the tissues. In addition, B. pertussis causes pertussis or whooping cough in two stages. The first stage is characterized by colonization, multiplication of bacteria, and production of localized tissue damage. The second stage of toxemia is characterized by mani-festation of systemic toxicity produced by a myriad of toxins.

Filamentous hemagglutinin: FHA is the most importantvirulence factor, which mediates the attachment of B. pertus-sis to the ciliated epithelial cells of the respiratory tract. It is a large protein (220 kDa) that forms filamentous structures on the cell surface. FHA binds to galactose residues on a sulfated glycolipid called sulfatide, present on the surface of the ciliated cells. This adhesin also binds to CR3, a receptor present on the surface of polymorphonuclear leukocytes. The intracellular survival of the B. pertussis inside the leukocyte protects the bac-terium from humoral antibodies against FHA.

Mutations in the FHA structural gene reduce the ability of B. pertussis to colonize. Recently, the structural gene for FHAhas been cloned, thereby raising the possibility of the produc-tion for use in a vaccine.

Pertussis toxin: Pertussis toxin is also involved in adhesion ofB. pertussis to tracheal epithelium. Pertussis toxin is a 105 kDaprotein; it is secreted into extracellular fluid and is also bound to the cell wall. Pertussis toxin typically composed of two major units A and B consists of six subunits S1, S2, S3, S5, and two S4 subunits. Unit A is enzymatically active moiety and consists of one toxic subunit S1. The unit B is responsible for binding of toxin to epithelial cells and consists of five binding subunits (S2, S3, S5, and two S4 subunits). The S2 subunit binds to a glycolipid present on the ciliated epithelium. The S3 subunit binds to ganglioside receptor on the surface of phagocytic cells.

Antibodies against pertussis toxin component prevent coloni-zation of the ciliated cells by the bacteria and provide protection against B. pertussis infection. Hence, pertussis toxin is a major vir-ulent factor in the initial colonization of the bacteria. Following binding of the B subunit to the epithelial cells, the A subunit is inserted through the membrane and released into the cytoplasm. The A subunit by its enzymatic activity transfers the ADP ribosyl moiety of the NAD to the membrane-bound regulated protein G1, which normally inhibits the eukaryotic adenyl cyclase.

The gene for pertussis toxin has been cloned and sequenced. The toxin is toxoided for use in the component vaccines.

Invasive adenylate cyclase or hemolysin: Invasive adenylatecyclase or hemolysin is a 45 kDa protein, which is bound to cell or is also released into the medium. It is a bifunctional toxin with an enzymatic component, i.e., adenylate cyclase activity, and a binding component that mediates attachment to the host cell surface. This toxin is produced by all three Bordetella species causing human infections. The adenylate cyclase was originally identified as hemolysin, because it causes lysis of blood cells. This enzyme in fact is responsible for producing zone of hemolysis around B. pertussis colonies on blood agar.

Lethal toxin: Lethal toxin was earlier known as dermone-crotic toxin. It is a heat-labile protein. It is a 102 kDa protein composed of four subunits: two with molecular weight of 24 kDa. The lethal toxin causes inflammation and lethal necro-sis around the site of adherence of B. pertussis. The toxin is lethal in high doses in experimental infection of mice. The role of the toxin in the disease is unknown.

Other factors: B. pertussisproduces at least two other types ofadhesins and pertactin, but their role in adherence and patho-genesis remains unknown.

Infection with B. pertussis is initiated by attachment of the bacteria to ciliated epithelial cells of the respiratory tract. The attachment is mediated primarily by two bacterial adhesions, FHA and pertussis toxin. The bacteria multiply at the site of infection, where they produce several toxins that paralyze the tiny cilia and cause inflammation of the respiratory tract (Fig. 39-1). 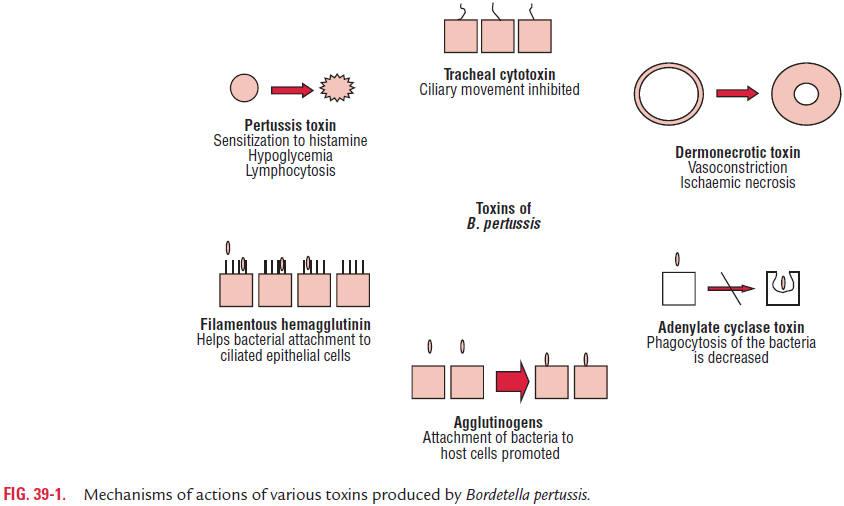 Further bacterial adherence is mediated by FHA and subse-quent bacterial phagocytosis. Subsequently, many other toxins produced by B. pertussis also contribute to the pathogenesis of the disease. Adenylate cyclase toxin also inhibits leukocyte chemotaxis, phagocytosis, and killing of the bacteria.

An attack of whooping cough gives lifelong immunity to a child. Secondary attack is extremely rare. The immunity is con-ferred by specific serum antibodies against B. pertussis.